Dr David Greenwood discusses talks delivered at a recent Cafe Scientifique event by three CESI researchers on their vision for the future of energy .

Dr David Greenwood is a researcher with the National Centre for

Energy Systems Integration (CESI) and is based at Newcastle University.

His research focuses on taking advantage of flexibility within energy systems and understanding sources of uncertainty and variability such as customer demand and intermittent generation.

Inspired by the Great Exhibition of the North, Newcastle University hosted a series of Café Scientifique events at the Urban Sciences Building, part of the rapidly expanding Newcastle Helix site.

The National Centre for Energy Systems Integration organised one of these events, with the title “The Future of Energy”, where three CESI researchers presented the vision of the UK’s energy future, and how we can get there. 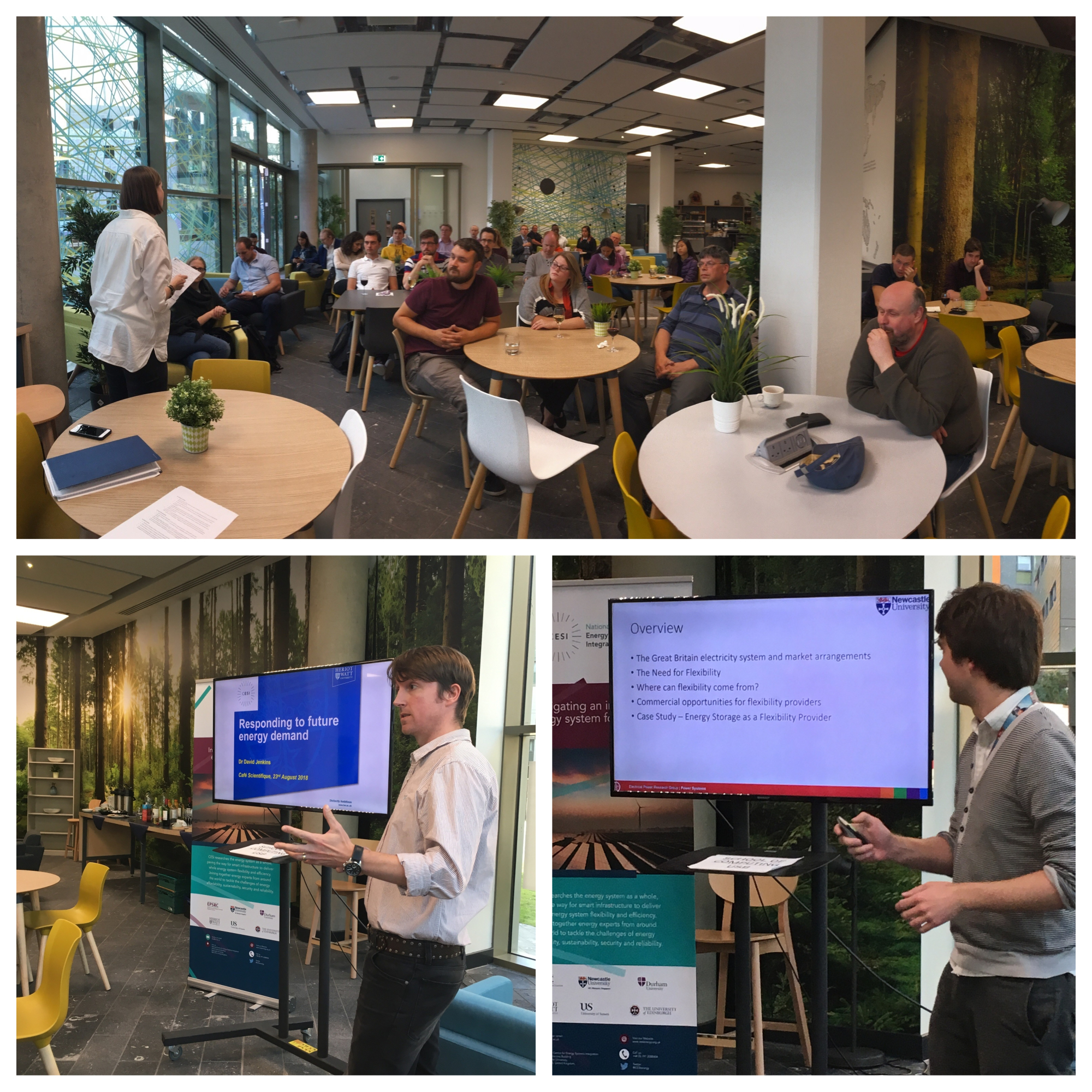 Dr David Jenkins – who had travelled from Heriot-Watt University for the event – gave his thoughts from the perspective of energy demand, how it could change it, and how we could meet it. Dr Jenkins talked about the data challenges in modelling energy demand. This includes the temporal and spatial scale of the available data, and the effects of aggregating large numbers of energy users, which generally works in a modeller’s favour by giving a smoother, more predictable pattern of demand. The impact of a number of low-carbon technologies, such as electric vehicles and heat pumps, which are vital if heat and transport are to be decarbonised by moving them onto the electricity system, was examined, with the summation of these changes resulting in the potential for a substantially different demand pattern to that experienced today. 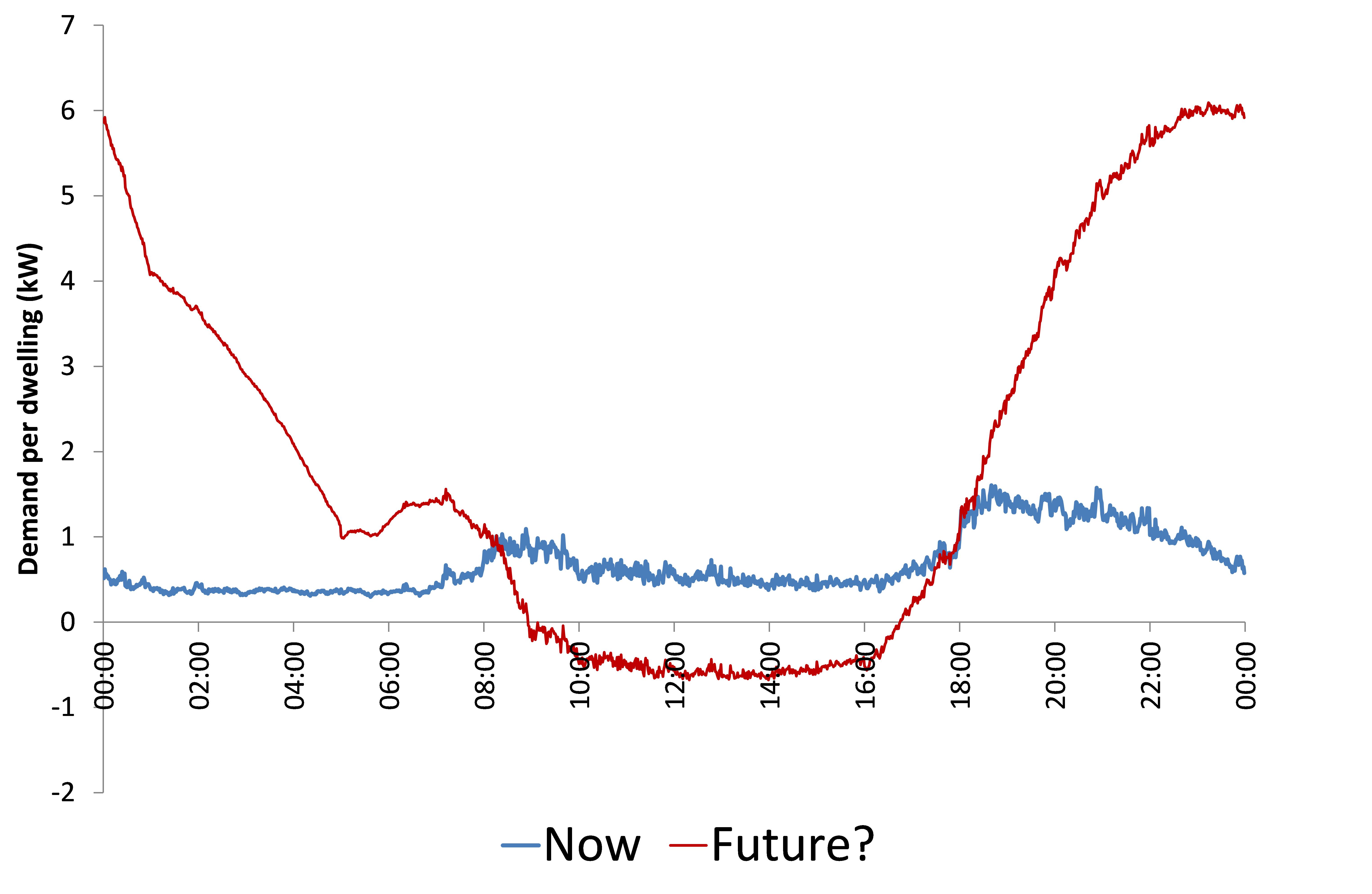 Next, Dr David Greenwood spoke about the need for flexibility within the energy system, and the challenges in procuring it through the markets and mechanisms that are currently used by the energy industry and in particular the electricity system operators. Dr Greenwood’s main argument was that we need flexibility – which already exists on the system in many forms – to address uncertainty on a variety of timescales ranging from when a customer plugs in their electric car, to how quickly and substantially low carbon technologies are adopted, to when new power stations are completed, all with the possibility of a failure anywhere in the system at any time. He concluded by presenting a flexibility case study based around energy storage, and showing how uncertainty and flexibility can be included within operational decision making processes.

The final presentation of the evening was given by Dr Andrew Jenkins, and had a focus on the whole energy system. Dr Jenkins talked about how the whole energy system can deliver cross-sector flexibility while still fulfilling the needs of its customers. He demonstrated this with a case study on electric vehicles using Vehicle to Grid charging technology, which could meet a set of system requirements whilst ensuring that their drivers would have enough energy to complete their journeys at the end of the day. He concluded with a detailed description of the university’s new InTEGReL site – a joint venture with Northern Powergrid and Northern Gas Networks which will showcase the potential for heat, transport, gas, and electricity to operate synergistically, providing cross-vector energy flexibility, and allowing validation of models and theory arising from academic research.

Figure 2: An overview of the InTEGReL site

The evening ended with a discussion with the audience – a range of attendees; consumers, prosumers, consultants, academics – which broadened the debate to include the political landscape, and more input from the perspective of the energy consumer. The audience had a breadth of technical knowledge, and their questions reflected this. Electric vehicles – which link the electricity and transport sectors – were the most popular topic for discussion, but the potential of power to gas, sources of inertia in zero-carbon energy systems, and the impact of energy efficient homes were also discussed. The event ended by a resounding agreement from the audience that they would like to attend another event on the topic of energy.

If you would like to suggest a topic for a future event, please get in touch at cesi@ncl.ac.uk.