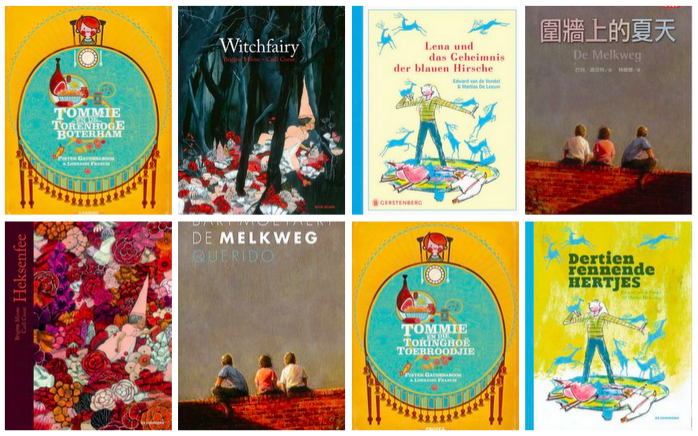 In the year leading up to my time in Newcastle as an MLitt student at the Children’s Literature Unit, people would inevitably say, upon hearing I was going to study children’s literature: ‘Oh I see, to learn how to write children’s books!’ I’d have to explain that studying children’s literature is in fact much the same as studying German literature and so that no, they weren’t talking to the next Roald Dahl. They’d be slightly disappointed by my answer and then would, full of hope for my future again, burst out, ‘Oh but I see, because that degree will much improve your prospects on the job market!’ Well, yeah but no. There’s not exactly that many jobs needing that qualification, but I’ve had the immense luck to find a job that suits my education perfectly.

I’m writing this blog post while seated in an enormous Boeing jet, waiting to take off in Brussels, Belgium (my home country), for Dubai, United Arab Emirates. You’ve just caught me in one of the busiest months in my ‘career’ so far, with the Frankfurt Book Fair, the Lakes International Comic Art Festival and the Sharjah Book Fair within three weeks of each other.

So what do I do and how did I get there? I work for an organisation called Flanders Literature, an autonomous government organisation that gets its funds from the Flemish Ministry of Culture. (In tiny Belgium you have Wallonia in the south, where people speak French, and Flanders in the north, where people speak Dutch. Then there’s the city of Brussels, which is an entity in itself and is officially bilingual. Lots of things, like education, culture, youth, health and so on, are the responsibilities of these regions and not of the federal government.)

Flanders Literature has a total of eighteen employees at the moment. In Flanders itself we issue grants to writers, illustrators, graphic novelists, playwrights and translators, so that they can ‘buy time’ to work on their books. The amount of these grants depends on the literary and artistic quality of their work, which is judged by advisory committees that are made up of experts in that particular genre (e.g. a writer, a bookseller, an academic).

About half of us are part of ‘the foreign department’, including myself. It’s our job to spread the word of the best literature from Flanders to foreign publishers, in the hopes of convincing them to translate and publish books by Flemish authors. You could say we do the work of an agent, but without the financial gain of sealing a deal (as we don’t own or sell any translation rights) and without the limitation of just a handful of authors. If it’s great and written or illustrated by someone from Flanders, we’ll promote it. And on top of that, we offer grants to help make the costly process of translating a book a little easier. There are a few other countries who have a similar system, like the Netherlands, Norway, Finland and Poland. You’ll notice these are mostly small languages who have to fight for their place in the international book world with different weapons than the English-speaking world.

So as Grants Manager for children’s literature and graphic novels I’m responsible for maintaining a network of foreign publishers, keeping them up to date on the books that might be of interest to them and helping them in every possible way to make it easier for them to translate and publish one of ‘our’ books. It means I get to read many books (and remembering the ending!) and have to bring across my enthusiasm for them to other people, i.e. foreign publishers.

An important part of my job is meeting as many foreign publishers as possible at a few book fairs we attend. Frankfurt (October), Bologna (March or April) and London (March or April) are very important each year. On top of that, there’s Angoulême for graphic novels and this year the Sharjah Book Fair. A first for me, and the second time for our managing director, who noticed there was a big demand for children’s books in the Arab world last year. I’m very excited to discover this whole new world!

And how did I get here? Well, pure luck. And a great boss. I’d been struggling to find a proper job for about eight months when there was a vacancy at Flanders Literature for a part-time temporary administrative job. Writing meeting reports, processing applications, that sort of thing.

Not my dream job, but with the foot in the door idea in mind I applied and got the job. And then someone got ill, and they asked me to start working full time. Temporarily. And then the Minister of Culture decided to get us extra money, and my boss promised me ‘a proper job for my qualifications’. And then the Ministry had to cut back on costs, so he had to take back that promise, but I could stay on. Temporarily at least. Until they ran out of money and they couldn’t keep me on. But perhaps – my boss asked me almost shyly – I could do the secretary’s work for a while until things changed? Temporarily, of course.

And things finally did change. Thanks to my boss and a wonderful team of co-workers I got the chance to grow, and after four years ended up where I am now. In a Boeing on its way to Dubai. Sometimes luck is on your side.

(Oh, and don’t forget to check out www.flandersliterature.be if you’d like to know more about our books and our organisation.)