Scotswood Natural Community Garden (SNCG), an independent charity, is located in Newcastle upon Tyne in a neighbourhood ranked in the highest 10% for income, health, employment, education and training deprivation in the UK. SNCG is the only natural green space in the area and one of very few organisations in the North East offering nature-based interventions for disadvantaged people. Established in 1995 and designed by the local community, the 2.5-acre garden includes wildflower meadows, forests, woodland, ponds and fruit and vegetable gardens. Last year over 5000 people participated in the garden’s activities or visited the garden.

This ESRC IAA funded project aims to engage garden users and stakeholders (volunteers, youth groups, staff, trustees, school staff and local people) in a participatory design and research process that explores the value of SCNG to its key users, working towards a shared vision for the future of the garden, developing a vision for a new facility that will expand the SCNG’s highly valued programme. The project team comprises architects Armelle Tardiveau and Daniel Mallo, sociologist/ethnographer Abigail Schoneboom, and research assistant Sophie Baldwin.

During May and June this year, SCNG’s volunteers, youth group members, staff and trustees have been busy exploring the meanings and value that attach to this wonderful community garden, nestled in one of Newcastle Upon Tyne’s most deprived neighbourhoods. With the goal of envisioning a new structure that will better serve users of this popular community resource, participants have explored the garden through sensory research and model-making, creating a richly textured portrait and a set of creative ideas that will inform the future development of the space.

In phase one, we worked with an inviting map created by research assistant Sophie, which highlights the garden’s spatial richness created by a diverse biodiversity and enchanting layout. Having marked our favourite spots on the map, we captured through pinhole camera photographs these special places in the garden.  Pinhole photography requires a very simple camera but taking a single photo can take up to half an hour of exposure! For us, this was a wonderful way to immerse ourselves in the garden and spend quality time smelling, listening to, touching and noting down on a map our feelings about these treasured locations. Alongside the photos and notes, we collected objects (such as dandelion leaves, pieces of string from the den-building area, and a blue-green fragment of a bird’s egg) and made sketches and rubbings. Together, these create a rich interpretation of what the garden means to its users. Using the tool shed as a darkroom, we ended each workshop by developing the photos and watching the images reveal themselves. 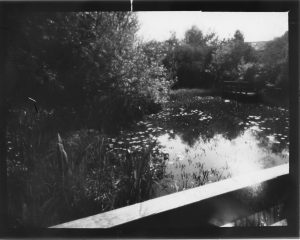 The silvery, poetic photos created in these first workshops capture something magical about the garden, encouraging us to dream and imagine possibilities. This photograph was taken by a garden volunteer.

In phase two, we built models and framed aspects of the garden, thinking about ways to envisage a new facility with some of the values and sensory qualities we had highlighted in phase one. Working with scaled wooden blocks and a range of materials from felt to scouring pads to evoke atmosphere, we created models that explored possibilities such as opening the indoors into the outdoors or using the vertical space to create a viewing platform. During the modeling activity, we also worked in pairs to ‘frame’ and photograph aspects of the garden that might inform views from the new structure. We imagined being indoor and looking onto the reflective qualities of water or witnessing edibles growing and changing.  We had a lot of fun (and a few challenges) carrying the heavy wood and hessian frame through the winding, narrow paths of the garden. 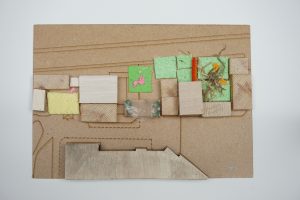 A tactile model shows the different textures of the garden

The garden is home to many great stories and memories, and much healing – the hum of the traffic on the nearby road, overlaid by birdsong and the rustling of the wind in the trees, is a welcome reminder of just how precious this place is. Themes that have emerged from our work together so far include the importance of building or growing something yourself, feeling protected and secure but out in the fresh air, and being connected to other people and the rhythms of nature. Also space overlaps and conflicts between the many groups of users enjoying the facility became apparent with its related ad-hoc but inventive approach to storage catering for all. 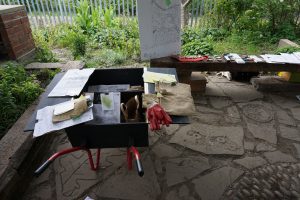 Our customised wheelbarrow holding the materials for the workshop

We have already displayed some of or initial findings and photos at SNCG. Our next step, over the coming weeks, is to materialise and enact some of the ideas with the input of the volunteers. These might be in the form of furniture or spatial adaptations that we will invite visitors to inhabit. This temporary and playful engagement, we hope, will move us further towards a design proposal for a new facility that grows out of the vibrant imaginations and experience of those who use it most and know it best.

A year after Jo Cox’s murder, Britain’s need for togetherness is stronger than ever Helen Jarvis, Newcastle University

Hundreds of thousands of people will picnic with their neighbours across the UK to mark the first anniversary of MP Jo Cox’s murder. The Great Get Together has sparked renewed interest in togetherness, reinforced by Cox’s declaration that:

We have more in common than that which divides us.

The event, on June 17 and 18, is happening at a time when families, communities and the nation have been left deeply divided by the EU referendum, the snap general election and uncertainty over the direction of Brexit negotiations. Today, more than ever, Britain needs to foster a new sense of togetherness.

People getting together with friends and neighbours to enjoy a shared meal or street party is not a new phenomenon. Street parties inspired by the non-profit Big Lunch enterprise have attracted at least 600,000 people a year since 2009. In 2012, 8.5m people took part in the Queen’s Big Jubilee Lunch.

Diverse gatherings allow people to share food and traditions with communities from different backgrounds. As the anniversary of Cox’s death falls in the month of Ramadan, many communities plan to hold a Lunar Lunch or Iftar – the shared feast which takes place to break the fast after sunset.

But can annual get-togethers and temporary festivals stimulate enduring shifts towards more collective and co-operative ways of living?

Cox was especially driven to highlight the damaging effects of loneliness. Her plans for a cross-party conversation have been posthumously realised through the work of the Jo Cox National Commission on Loneliness.

Loneliness is often caused not by a lack of friends or family but by how disconnected people feel from others around them. Homes in the UK are conventionally designed to emphasise individual private property. This “hyper-individualised” housing makes it difficult for people to get to know their neighbours, at a time when many more people live alone for much of their life, often lonely or isolated.

Street parties and festivals foster a spirit of togetherness, however fleeting, and this matters to community well-being. Shared meals also feature in collective, cooperative living arrangements, such as co-housing. This is a way of living which brings individuals and families together in groups to share common aims and activities while also enjoying their own personal space.

Co-housing communities typically have around 20 to 30 households and may be exclusively for older people or for mixed-age residents. Each household has its own self-contained home but shares in the management of the whole site and a shared “common house”. My own research suggests how co-housing arrangements can offer a pragmatic utopian solution to severed connections between people and the places in which they live and work. There are currently 20 established co-housing projects in the UK, plus another 12 under construction or with land identified. More than 70 nascent groups, of all ages, are currently seeking to develop a variety of schemes.

Other on-going research I’m doing is exploring how self-organising groups form and how these communities cultivate deep and enduring relationships.

Jo Cox would have recognised the shared sense of purpose and mutual support among those putting on and attending the Great Get Togethers. She and her family chose to live in a co-housing-inspired cooperative community of residential and recreational historic boats on the Thames, Hermitage Community Moorings (HCM). From the outset, the group’s intention was to create a close-knit community. The practical and emotional benefits of this are evident in the many ways that Cox’s grieving family have been supported by HCM over the past year.

In this way, socially connected communities can provide more effective neighbourly support than conventional streets of houses. They offer social benefits for members and society at large, such as increased well-being, shared know-how, and mutual care.

Sharing and togetherness are popular buzzwords, and care must be taken to weed out superficial cases of sharing in “counterfeit communities” – where yearning for connection can be manipulated for commercial gain. This is evident in commercial blocks of student bed-sits where “togetherness” is sold by access to a cinema, gym and high-speed wi-fi – rather than by shared responsibility for supporting each other.

If they are to thrive for the inclusive benefit of all members, self-organising communities need to nurture skills of mutual understanding that are neglected in competitive “do-it-yourself” societies. Yet, in the run-up to a weekend of community events, we are witnessing promising green shoots of “do-it-together” conviviality.

The best way to honour the hopeful ideals that Jo Cox and her family have come to represent must surely be to build a lasting legacy from The Great Get Together of more socially connected communities.

This article was originally published on The Conversation. Read the original article.