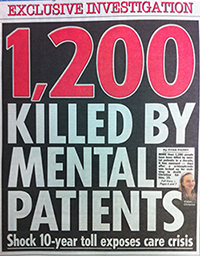 The erroneous and stigmatic Sun headline

So yet again people with mental illness find themselves subject to stigma. On Monday 7 October 2013 The Sun newspaper alleged in a full page headline that over a ten year period 1,200 people had been killed by “mental patients”. The wording “mental patients”” mirrors the hugely inappropriate fancy dress costume which ASDA and Tescos were forced to withdraw from sale on their websites (be a third party). Not only was the language stigmatising and the period to which the figures applied much smaller than the sensational headline but they were simply wrong.

The figures are taken from the The National Confidential Inquiry into Suicide and Homicide by People with Mental Illness (NCISH). This is a programme, based in Manchester University that has been running over the past ten years. The data actually shows that over that period 1,200 people have been killed by individuals subsequently found to have a mental illness. The number of patients (i.e people in contact with mental health services, perviously diagnosed with mental illness) was significantly smaller. The average number of homicides per year is around 74 for the UK as a whole and that has been falling since a peak in 2004-2006. This is an important distinction when you look at the wider picture. Perpetrators with a primary diagnosis of schizophrenia.

To quote a rebuttal published on the site The Conversation,

This entry was posted in polemic, schizophrenia, stigma, violence. Bookmark the permalink.