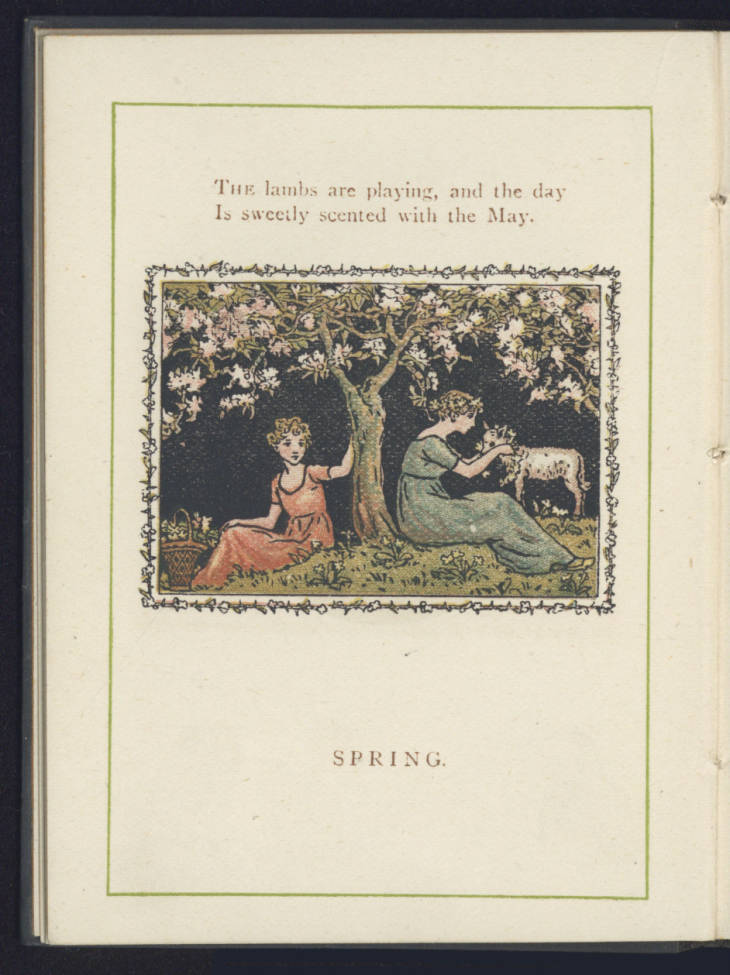 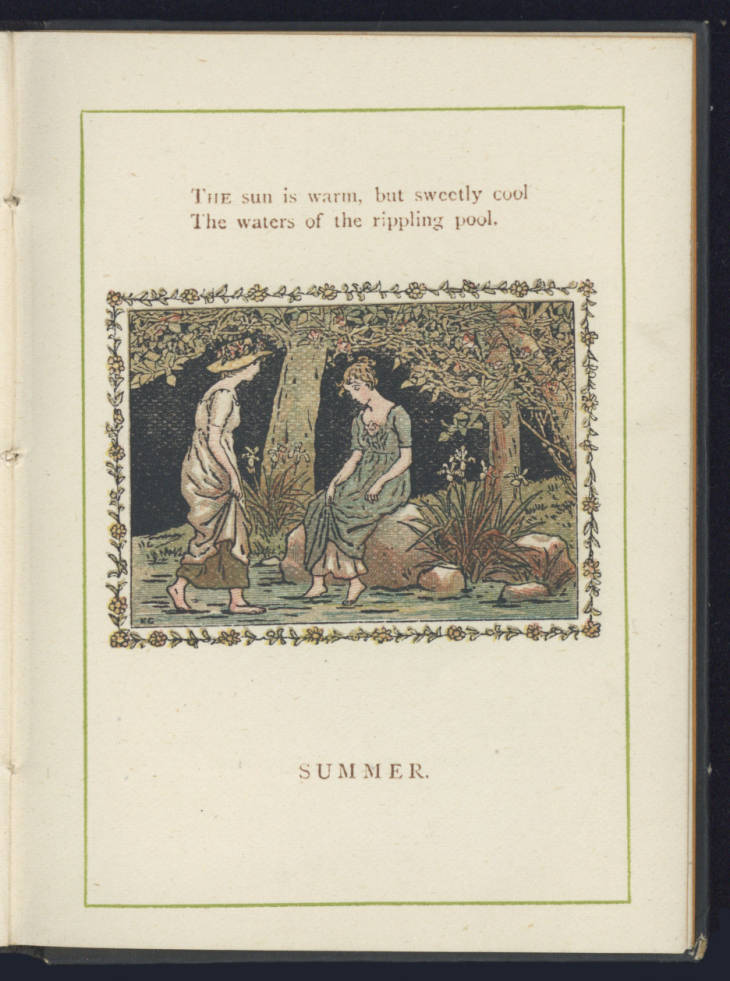 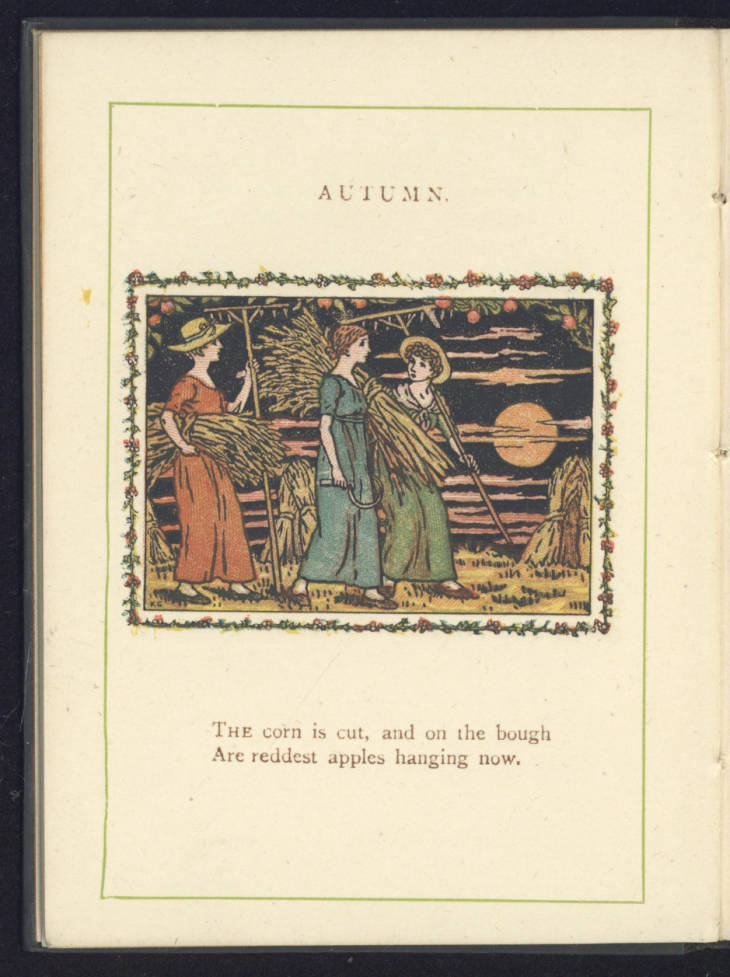 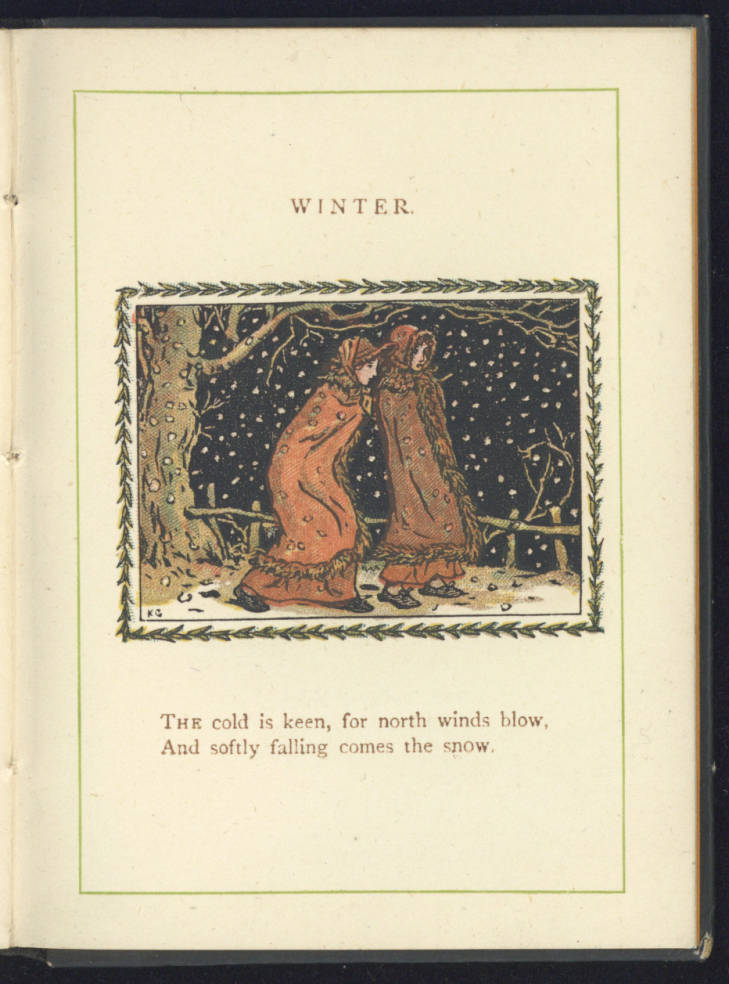 The lambs are playing, and the day
Is sweetly scented with the May.

The sun is warm, but sweetly cool
The waters of the rippling pool.

The corn is cut, and on the bough
Are reddest apples hanging now.

The cold is keen, for north winds blow,
And softly falling comes the snow.”

Catherine Greenaway (1846 – 1901), known as Kate Greenaway, was an English children’s book illustrator and writer. Her almanacs ran from 1883 up until 1897, with no 1896 issue being published. Each almanacks included a Jan-Dec calendar, beautifully drawn illustrations and short poems. Her almanacs were sold throughout America, England, Germany and France and were produced with different variations and in different languages. 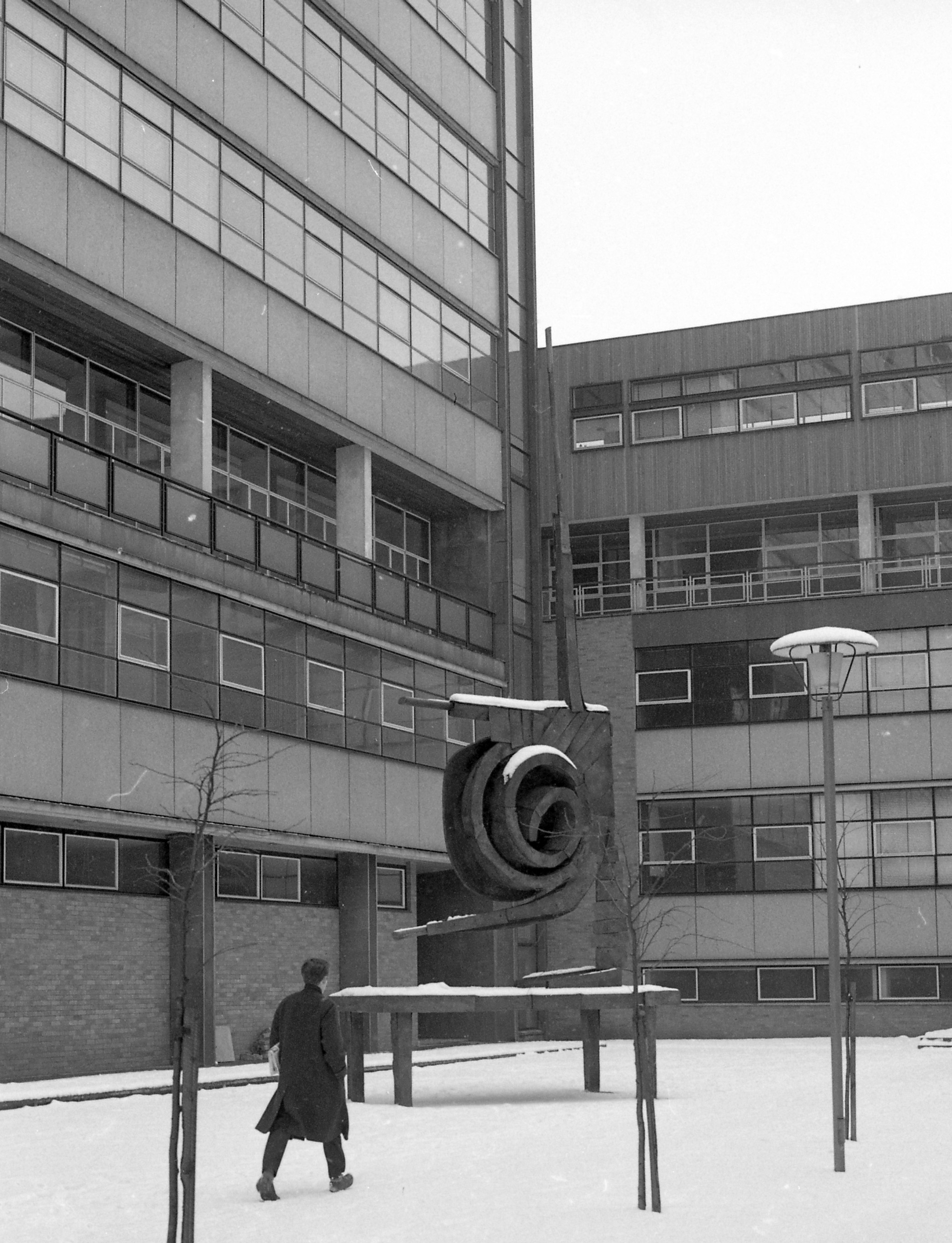 Although he is famed as a novelist and journalist, it is a fact perhaps less well-known that, during the last twelve years of his life, Charles Dickens (1812-1870) embarked on a new career for himself as a highly successful performer, touring Britain and America to deliver public readings from his novels and stories to thousands of people.

From 1853, Dickens had given successful public performances of his work for the benefit of charities, but from the late 1850s a feeling of restlessness combined with an inclination to accept invitations to read for money – perhaps owing to his recent purchase of a house, Gad’s Hill Place in Kent – and he began to give professional commercial public readings.

Dickens gave his first commercial reading in London on the evening of 29th April, 1858. Travelling with a manager, a valet and a technician, he used a simple stage-set of a small reading desk with a screen behind it to act as a sound-board for the projection of his voice, illuminated by gas-fittings hanging from a lighting rig above the stage. He rehearsed carefully and intensively so that he knew his texts by heart, and would improvise spontaneous variations in response to the reaction of a particular audience. As he read aloud he assumed the various roles and characters from his stories, imitating their accents and mannerisms to create a dramatic performance which was more than simply reading aloud from a book, and which delighted the crowds.

After his success in London Dickens went on to tour a number of provincial English cities, including Newcastle upon Tyne, and present in the audience there on 24th September 1858 for a reading of A Christmas Carol was the antiquarian Robert White. The White (Robert) Collection was presented to the then King’s College Library (now Newcastle University Library) by his family in 1942, and are now held in Special Collections. Contained in a journal amongst his papers is this vivid eye-witness account of his trip to hear Dickens read on that occasion.

White begins, “In the evening went to hear Charles Dickens read his Christmas Carol – saw him at a distance of 10 yards.” He goes on to give a detailed physical description of Dickens, including his forehead which is “more broad than high”, “cheeks thin with wrinkles coming over them at the side of the nose, black eyes, brown rather than black… His chin and mouth are partly hidden by a beard – the mouth rather large and chin prominent.”

Of the performance itself, White writes enthusiastically, “He addressed the audience in perfect self-possession, a capital reader, or more a speaker, for his readings are like speakings. Every word falls distinctly on the ear… He has little or no action save when he throws it into the making up of a character. His imitations of the dramatis personae are very good.” 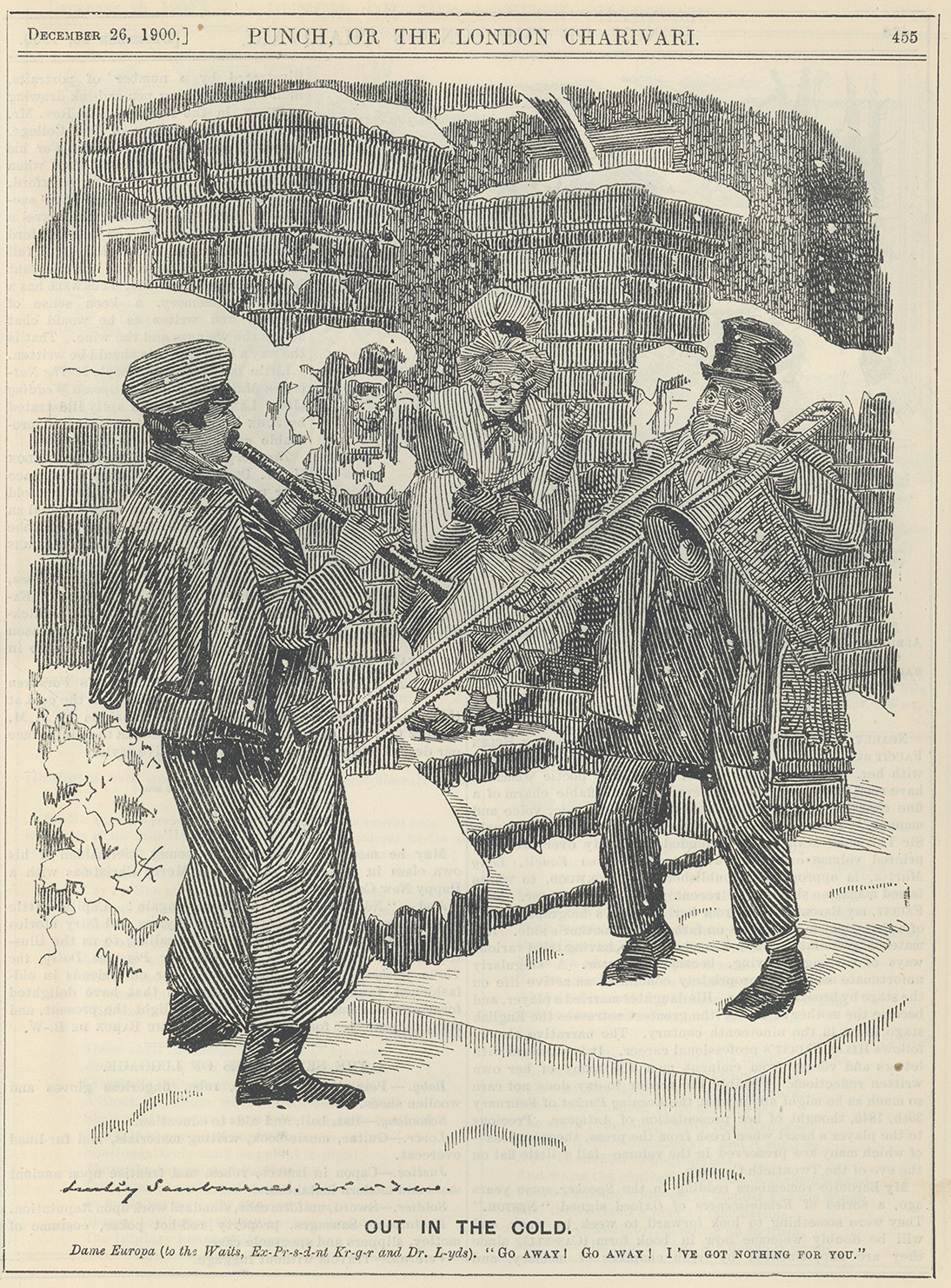 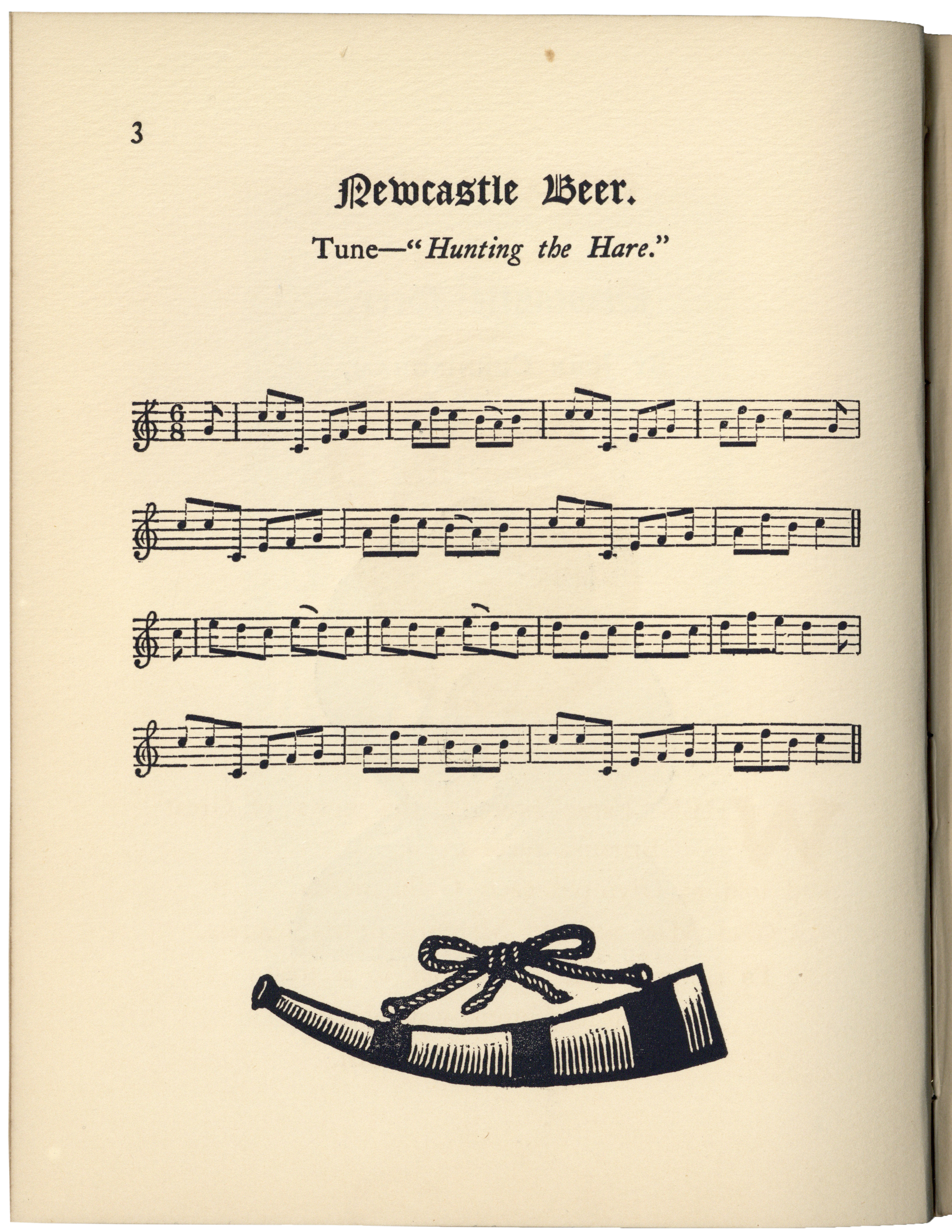 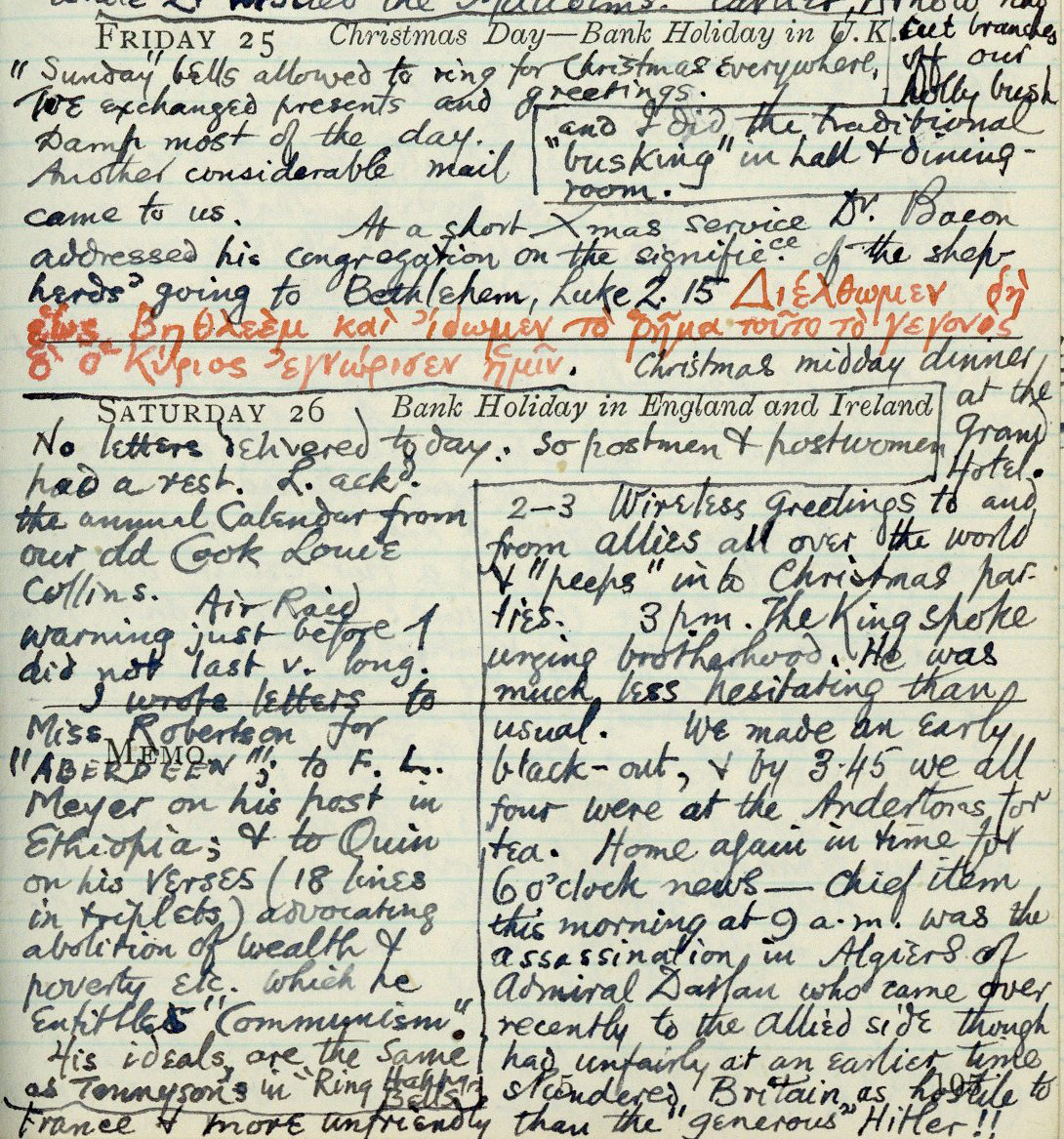 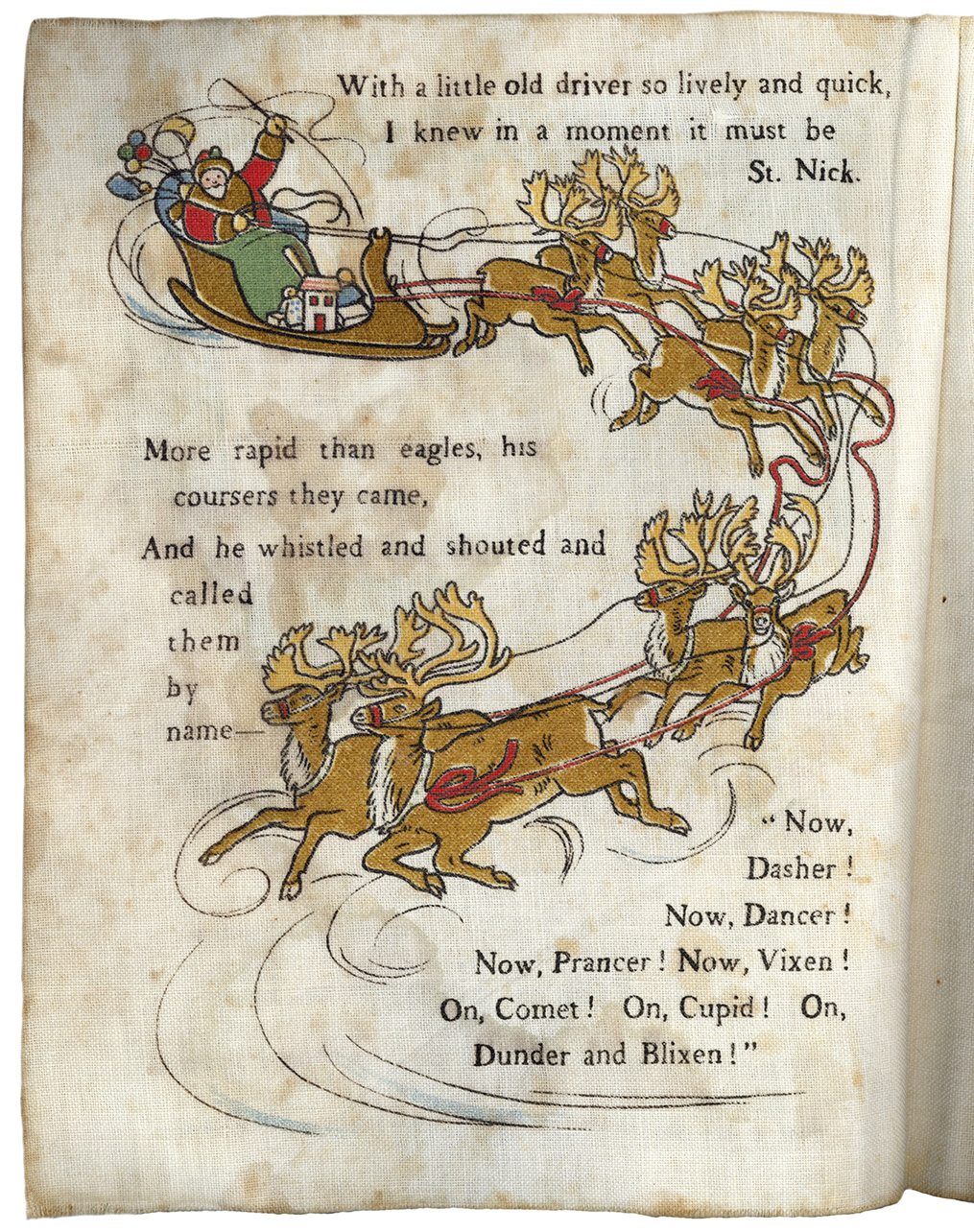 “The moon on the breast of the new-fallen snow,
Gave the lustre of midday to objects below –
When what to my wondering eyes should appear,
But a miniature sleigh and eight tiny reindeer.”

The above image and extract are from ‘The Night Before Christmas’,  Dean’s Rag Books Co. Ltd.

‘The Night Before Christmas’ (1903) contains colourful illustrations printed on fabric (also known as rag books) and is sewn up the spine using thread.

Dean’s Rag Books Co. Ltd, was founded in 1903, by Henry Samuel Dean. The company was originally set up to make rag books but soon diversed into rag sheets and soft toys, including teddy bears. During the 1920s and 1930s Dean’s were at the forefront of British bear manufacturing. 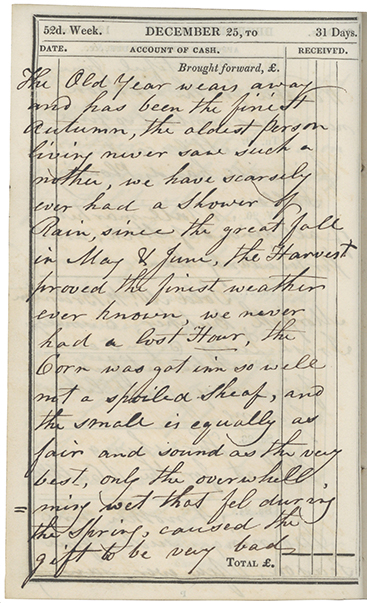 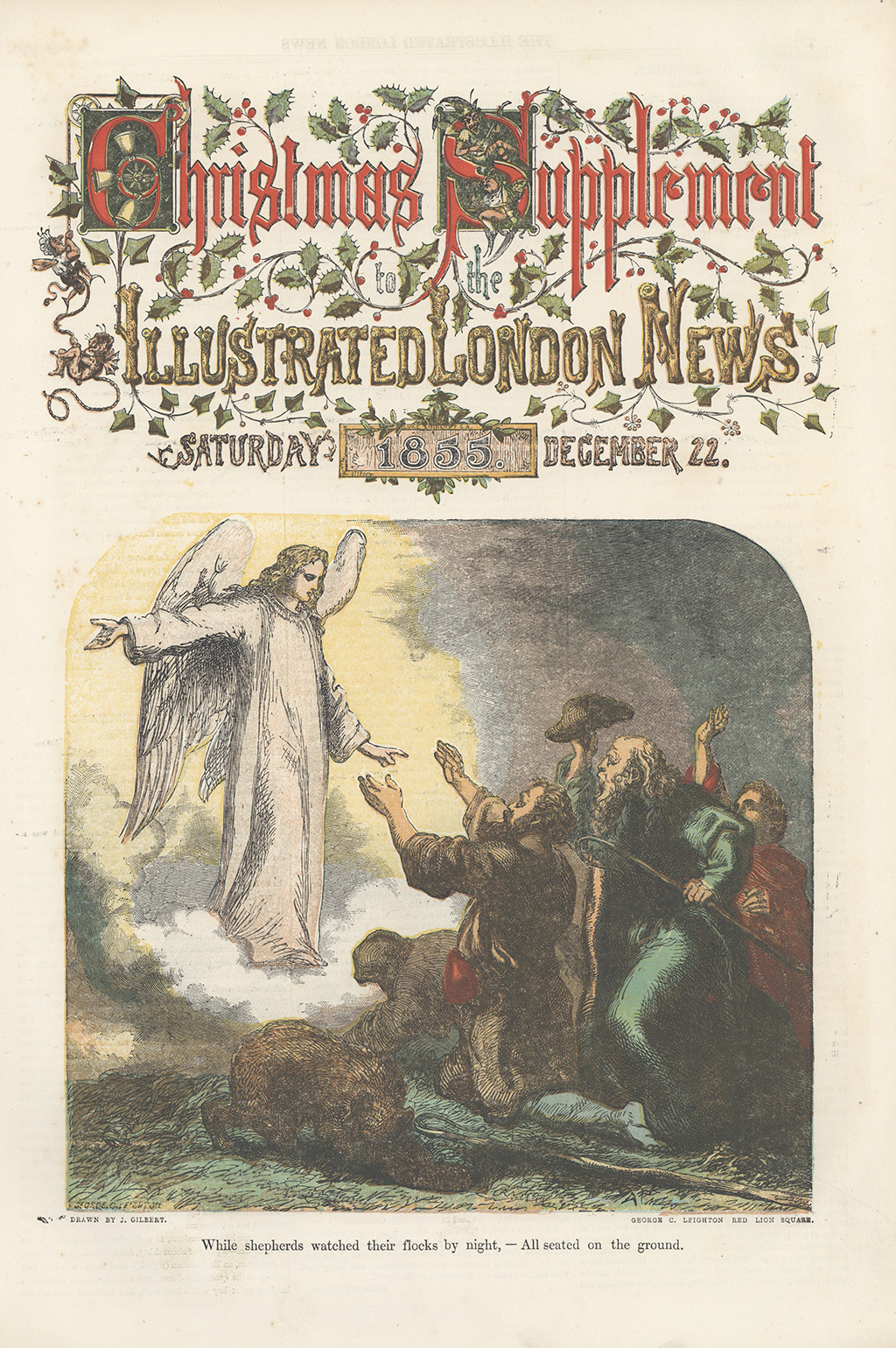 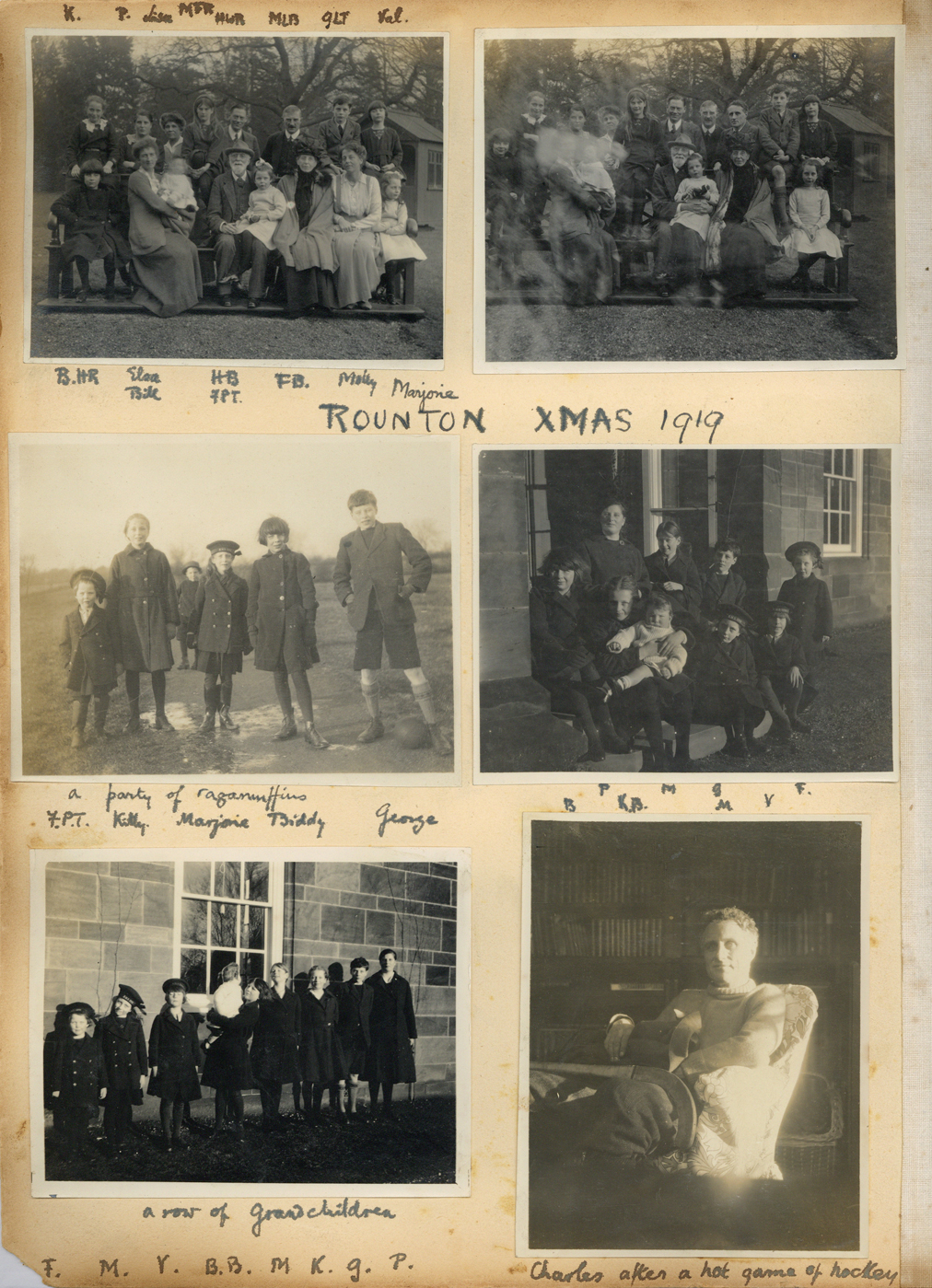