Tomorrow, the 4th March, the artist-led studios of the NewBridge project in Newcastle city centre will be emptied out in preparation for the demolition of the building later in the month. Over the past seven years the project has offered an inexpensive studio space to hundreds of artists both locally, nationally and internationally from diverse areas of practice, giving them the opportunity to create and develop their work, then exhibiting in the gallery on the ground floor and around other cultural venues in the city. From October 2016 until February 2017 researchers from Newcastle University documented the different conversations, practices, spaces and exhibitions within the studio building, Norham House, a project that soon became a piece of ‘rescue archaeology’ as the current tenants were given notice of their eviction from the building.

The completion of this project and indeed, the destruction of the building was marked by a research event on 1st March where Dr Martyn Hudson presented a short summary of the findings of his recent work (which can be found at the bottom of this post). He spoke of the constant ‘contest of ideas’ within the building, a project with a deeply ‘bottom-up’ structure that helped form a unique space of creative practice, which will hopefully be extended into the new home for the project when it moves to Carliol House. 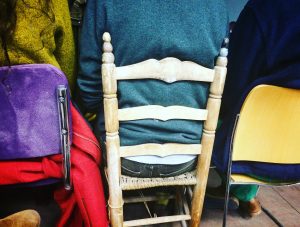 An assortment of chairs, like the contest of ideas found in the NewBridge project event

“What is the impact of creative hubs and organisations like NewBridge on places, individuals, and the arts sector and on regeneration?”

The answers from the panel were varied and provoked a range of responses from different perspectives surrounding impact of cultural industries. Julia Heslop discussed the importance and impact of thinking creatively on wider communities beyond NewBridge alongside the availability of truly affordable space for artists in city centre locations undergoing processes of urban ‘regeneration’. John Tomaney noted that often impact in other industries is mapped in larger-scale economic terms, however the cultural sector operates very differently. He suggested a move away from a purely financial measurement model, instead thinking about civic impact and cultural gain at a micro or community level – focusing on the small changes that can make real differences to local life and the vitality of our cities.

Hans Moller brought an international perspective and saw the potential for creative hubs such as NewBridge to become centres for ‘innovation’, an approach used in his previous role as CEO of Ideon Science Park in Lund but currently less prevalent in the North East. He noted that the varied creative ideas which spilled out of NewBridge were incubated in this space which has a huge social impact on those outside the building, a process that universities must also be a part of.  Sarah Munro added that the clashes of ideas that happen in creative hubs are vital for new work to be both generated and tested in an ad-hoc way that larger organisations such as The Baltic rely upon. Sarah also emphasised how ideas of civic impact shapes their programming and exhibitions alongside their internal processes and organisational practices. 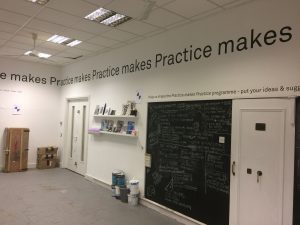 The walls support practice in the soon-to-be-vanishing NewBridge studio space (Practice Makes Practice is a Newcastle Institute for Creative Arts Practice funded initiative, in collaboration with the NewBridge Project, to support graduate artists with skills and training for professionalising their art careers)

The issues brought up by these different voices speak to the wider questions of how The Arts are valued more generally in society and how they can impact on a wide array of local communities. However difficulties still remain in trying to trace and evidence the way The Arts shape, change and support thinking outside these particular spaces. How can thoughts or feelings and the impact of ideas on individuals really be measured? The attendance at this particular event (the room was packed) speaks to how significant NewBridge is to the cultural landscape of Newcastle and beyond, and how these discussions around understanding value in the arts needs to be communicated to broader publics.

It seems appropriate that ‘Moving on Up, Moving on Out’ is the name of the final exhibit at NewBridge before it closes its doors, as this title neatly summarises the direction of travel when it comes to the ideas that are housed within the NewBridge walls. Where concepts come from the ‘bottom-up’ – from practising artists, they can grow outward into the local communities and could begin to feed into local governmental structures and on into other places and spaces around the region. NewBridge 2.0 will be housed around the corner in Carliol House, here’s hoping that it continues to challenge, disrupt and make an impact.