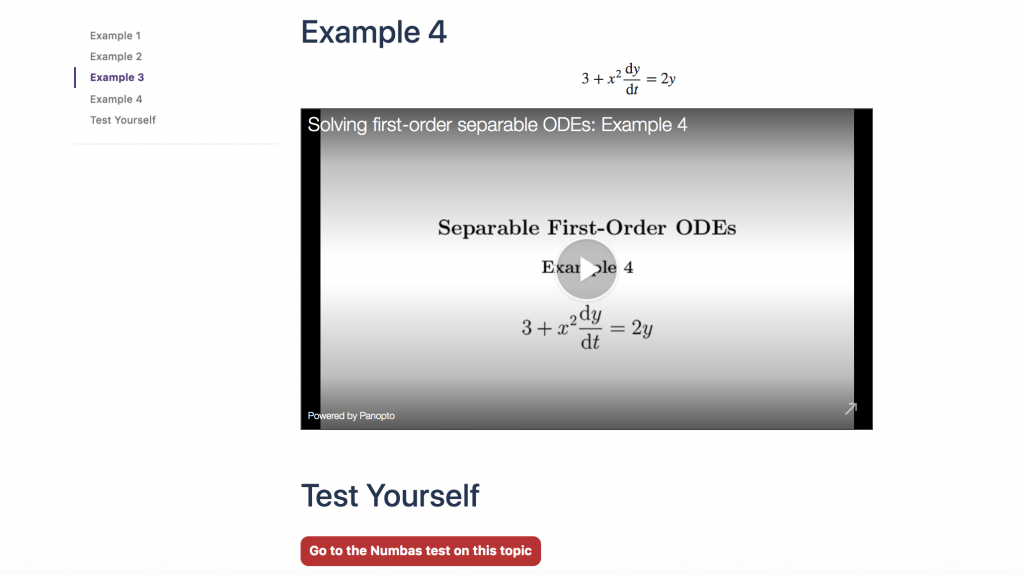 The idea was to take the full lecture recordings and to split them up into short videos to capture single exercises or ideas, which might typically last 5-15 minutes in the lectures. And then to offer these videos, grouped by topic, as an additional resource to this year’s cohort.

Last summer we employed the help of an undergraduate student to assist with the cataloguing of content and to create some of these short videos. 12 videos were created in total, covering two main sections of the lecture course. Nothing special was done in editing the videos, except to add a title screen which displayed the topic and exercise covered by the video.

The videos were grouped by section and presented along with a link to the relevant Numbas practice test for that section. Engagement with the formative Numbas material is very poor in this module, and it was hoped that the slightly tighter integration of the different resources might help with that engagement.

All of the ReCap videos that you have access to can be found in the Panopto/ReCap portal at campus.recap.ncl.ac.uk. If you are re-purposing an existing video then it is a good idea to make a copy. You should have a folder called “My Folder” that is ideal as a place for messing around with stuff. This was my sample video (hence the introduction) from a ReCap workshop earlier in the Spring, which demonstrates the procedure:

Embedding videos inside a Blackboard item is very straightforward, but not well known about. The easiest way to embed a recording is to use the “Mashups” link. This opens a window in which you can search for and select a recording.

The final thing we did was to add title slides to the videos. This gives an overview of what is in the video, rather than the preview being a random frame. To do this we created images containing the information and then added them within Panopto by editing the “Preview image”

The videos were released at around the time that the topics were covered, and initially there was a slow uptake, in terms of video views. We looked at the statistics again at the end of the semester 1 exam period and were pleasantly surprised that students appeared to make very good use of them for exam revision. This was a feature too in the second semester exam period.

Overall the videos have had over 1600 views, with around 6000 minutes of viewing time in total. Perhaps not surprisingly, given the small scale of the project, the full length ReCap recordings remained more popular: these typically have 300-500 views in comparison to 100-200 for the short videos. For context, the module has upward of 600 students.

The actual number of students accessing recordings is not quite clear, and this was a lesson learned in the set up of the videos. The permissions that we had set on the videos meant that they could be viewed without the student identifying themselves to Panopto (I had wrongly expected that their Blackboard session would allow identification), and so many were recorded as an anonymous user. This was a shame, as the information would have been useful, particularly to find out whether the videos had an impact on engagement with the formative assessments.

Despite this, the uptake and positive informal feedback from some students encouraged us to consult directly with more students and to consider the expansion of the project…

Students attending ENG1001 tutorials were asked about the short videos in the Spring. 170 students were in attendance, of which 112 (66%) indicated that they had used the videos. Those who had were asked to indicate how useful the videos were…

Clearly this is very positive, but not entirely unsurprising. What will be of interest as we extend the pilot is the finer grain detail of how the short videos fit in to students’ learning and revision plans.

We will look to expand the project in 2019/20, attempting to get full coverage of topics in at least semester 1. Learning from this pilot, it’s hoped that we can build a picture of how students use the short videos, whether they use them in addition to full lecture recordings, and whether there are real benefits to their learning, directly or indirectly through better engagement with other resources.

Some further interesting analysis could be made that is specific to this module. The 600 or so students are split into two groups at the start of stage 1, completing the module with different lecturers. One of the lecturers (thanks John) volunteered to have his videos catalogued and processed. Do the students find the videos more useful if it is their own lecturer? Maybe they prefer the alternative?

Finally let’s talk about some concerns that arise:

Splitting full length recordings into smaller chunks is not necessarily practical, and there’s certainly an argument against going to great time and effort to spoon-feed the students content that they can already find. However, if there are benefits then it may be appropriate for some modules, including this one, where content can be re-used year after year.

It got me thinking about my own teaching: I could not do what we’ve done for ENG1001 in one of my own modules. However, in places I have a choice of examples that I might go through in a lecture, but only time to pick and go through one. It has struck me that I have an opportunity to go through a different example this year, and then to re-purpose last year’s video as an additional resource. Food for thought…

Finally, I am sure that colleagues may have concerns about the undermining of lectures themselves. The use of existing lecture capture material at a number of institutions was certainly extremely controversial during the UCU strikes. There’s also consideration of whether breaking down recordings removes the broader narrative of a lecture. I can’t disagree with that, and I don’t expect that using such videos will ever be a replacement for full lecture recordings. Hopefully though, I’ll be back here next year for a fresh brain dump, to tell you whether they can successfully complement full lectures and their recordings.

Thank you to Aiden McCall and to Carol Summerside in LTDS for their help on the project, and to David Swailes and John Appleby for their help promoting the material and gathering feedback. Thanks to the NUTELA group for funding the project through their Small Grants Fund. The fund is a great way to explore the use of technology-enhanced learning in your teaching practice, and if you have ideas then definitely do think about applying.