These define areas of computing where power and energy require rationing in making systems perform their functions.

Different ways of categorising applications can be used. One possible way is to classify application based on different power ranges, such as microWatts, milliWatts etc.

Another way would be to consider application domains, such as bio-medical, internet of things, automotive systems etc.

Power-driven: Starting on bicycle or car from stationary state as we go from low gears to high gears. Low gears allow the system to reach certain speed with minimum power.

Energy-driven: Steady driving on a motorway, where we could maximise our distance for a given amount of fuel.

Time-driven: Steady driving on a motorway where we minimise the time to reach the destination and fit the speed-limit regulations.

Hybrid: Combinations of power and energy-driven scenarios, i.e. like in PI (D) control.

Similar categories could be defined for budgeting cash in families, depending on the salary payment regimes and living needs. Another source of examples could be the funding modes for companies at different stages of their development.

These define elements, parameters and characteristics of system design that help meeting the constraints and optimisation targets associated with the paradigms. Some of them can be defined at design (programming and compile) time while some defined at run-time and would require monitors and controls.

First of all, I would like you to read my previous post on the graphical interpretation of the mechanisms of evolution of X and Y chromosomes.

These mechanisms clearly demonstrate the greater changeability of the X pool (in females) than the Y pool  (present only in males) – simply due to the fact that X chromosomes in females merge and branch (called fan in and fan out).

The next, in my opinion, interesting observation is drawn from the notions of mathematical analysis and dynamical systems theory. Here we have ideas of proportionality, integration, differentiation, on one hand, and notions of combinationality and sequentiality on the other.

If we look at the way how X-chromosomes evolve with fan-in mergers, we clearly see the features akin to proportionality and differentiality. The outgoing X pools are sensitive to the incoming X pools and their combinations. Any mixing node in this graph shows high sensitivity to inputs.

Contrary to that, the way of evolution of Y-chromosomes with NO fan-in contributions, clearly shows the elements of integration and sequentiality, or inertia, i.e. the preservation of the long term features.

So, the conclusions that can be drawn from this analysis are:

Again, I would be grateful for any comments and observations!

PS. By looking at the way how our society is now governed (cf. female or male presidents and prime ministers), you might think whether we are subject to differentiality/combinatorics or integrality/sequentiality and hence whether we are stable as a dynamical system or systems (in different countries).

As a corollary of that fact we also know that Y-chromosomes, sometimes synonymized with Y-DNA, are only inherited by the male part of the human race. This means that Y-chromosome inheritance mechanism is only forward-branching, i.e. Y-DNA is passed from one generation to the next generation “nearly” unchanged. As I am not an expert in genetics I cannot state precisely, in quantitative terms, what this “nearly” is worth. Suppose this “nearly” is close to 100% for simplicity.

Below is a diagram which illustrates my understanding of the mechanism of inheritance of Y-chromosomes. 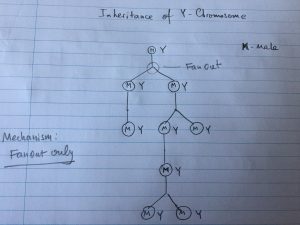 This diagram is basically a branching tree, showing the pathways of the Y-DNA from one generation to the future generations of males. The characteristic feature of this inheritance mechanism is that it is Fan-out only. Namely, there is no way that the Y-DNA can be obtained by merging different Y-DNAs because we have no Fan-in mechanism.

Let’s now consider the mechanism of inheritance and evolution of X-chromosomes.The way how I see this mechanism is shown in the following diagram. 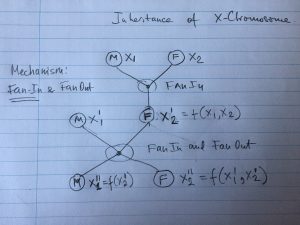 X-chromosomes are inherited by both males and females. But, as I understand, this happens in two different ways.

Each male, however, only inherits X chromosomes from his mother, as shown above, where X1’’=f(X2’).

At each generation, when the offspring produced has a female, there is a merge of X chromosomes from both parents. This means that the pool of X chromosomes as we go down the generations is constantly changed and renewed with new DNA from different incoming branches.

This mechanism is therefore both Fan-in and Fan-out. And this is not a tree but a directed acyclic graph.

What sort of conclusion can we draw from this analysis? Well, I draw many interesting (to me at least) conclusions associated with the dynamics of evolution of the genetic pool of males and females. One can clearly see that the dynamics of genesis of females is much higher than that of males. Basically, one half of a male’s genesis remains “nearly” (please note my earlier remark about “nearly”) unchanged, and only the other half is subject to mutation, whereas in females both halves are changed.

I can only guess that Y-chromosomes are probably affected by various factors such as geographical movements, difference in environment, deceases etc., but these mutations are nowhere near as powerful as the mergers in the X-pool.

In my next memo I will write about the relationship between the above mechanisms of evolution and PID (proportional-integrative-differential) control in dynamical systems, which will lead to some conjectures about the feedback control mechanisms in evolution of species.

I would be grateful if those whose knowledge of human genetics is credible enough could report to me of any errors in my interpretation of these mechanisms.

in collaboration with Newcastle’s Computing Science colleagues, as well as with the teams from Imperial College and Southampton Universities (under PRiME project – http://www.prime-project.org) , has published a visionary paper in IEEE Computer on how to analyse the interplay between performance, energy and reliability of computing systems with increasing number of processor cores.

Here is the video: https://www.computer.org/computer-magazine/2017/08/08/voltage-throughput-power-reliability-and-multicore-scaling/

And for some time it will be front page on the multimedia front page: https://www.computer.org/computer-magazine/category/multimedia/

A very interesting workshop was held in my Alma Mater (LETI – Electrotechnical Universrity) in Saint Petersburg, Russia on 4-8 July 2017.

The workshop contained lots of interesting presentations – largely from industry and largely on modelling and empirical measurements of the EM interference in microsystems and ICs. Basically, the problem of reuse and block replacement is huge due to the unpredictability of the EM effects between components on PCB and on chip.

Here are the presentations:

Milos Krstic (from IHP) and I gave a keynote talk, which consisted of two parts:

(1) Digital Systems Clocking with and without clock: a historical retrospective (emphasizing the role of researchers from LETI – mostly Victor Varshavsky’s group where I used to work in the 1980s)