Skip to primary content
Skip to secondary content
PhD student Ian Merrell updates colleagues on the latest activities of the Rural Growth Intereg project and how CRE is contributing to nurturing rural tourism across Europe. 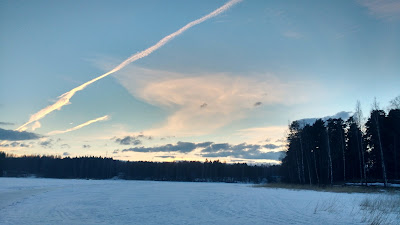 The Rural Growth European Union Intereg project isn’t just a great opportunity for me to visit some fascinating places in Europe.  It’s an initiative that aims to increase the competitiveness of rural small and medium sized enterprises through tourism, and it brings together partners from the Netherlands, Spain, Italy, Hungary, Romania and Finland for knowledge exchange and learning. CRE is the academic advisory partner and that’s why we are invited to meetings in all of these different countries. The project aims to provide a methodology for the practitioner groups to follow, using contributions from local stakeholder groups as their starting point. The themes of previous meetings have largely been around ambition setting, status quo analysis and highlighting best practice, but now the project is progressing into the juicier stages of influencing policy. Each partner is to host an inter-regional meeting and this time it was the turn of Savonlinna (in Finland) and Medina Del Campo (in Spain).   So, on to Finland!
After a beautiful train journey north out of Helsinki, the team arrived in the tranquil town of Savonlinna. Our Finnish hosts had invited a local Councillor to open the meeting and provide a detailed overview of the socio-economic context of the region, explaining the importance of cultural events, newly planned infrastructures and potential ties with St Petersburg to improve the touristic offer. In the afternoon each of the partners from the countries involved was asked to present what they wanted to achieve in the project, now they have consulted with their local stakeholders and highlighted their best practices. Each is now developing a distinctive offer; no two presentations were the same, and each was interesting in its own way. 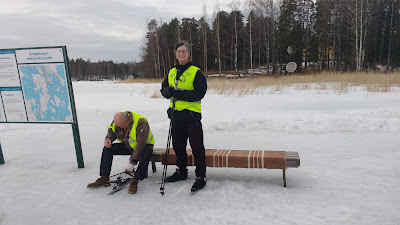 Field visits are a vital part of inter-regional knowledge exchange and our Finnish hosts were keen to show us the sights. We visited a local hotel (as you will see from the photo, I took the rather adventurous route – on ice skates on a frozen lake), the world’s largest wooden cathedral, Savonlinna Castle (the home of the International Opera Festival) and National Park.  We also met local entrepreneurs.
We rounded off the visit with a workshop where the CRE team helped partners to think about policy instruments and action plans. The importance of digital connectivity emerged as one constant theme in the discussions.
Our next project get together was at a completely different venue: Medina Del Campo, two hours west of Madrid. Our Spanish partners had organised accommodation in a 16thCentury fortress (a real treat!). The focus of the meeting was to consider the key themes that have emerged from our work so far:
And to look at the first drafts of the partners’ action plans around these themes.
The partners each presented their first draft action plans to the group and feedback was given by the CRE team. Again, the plans are developing in different and interesting ways; some partners are focusing on creating local brands and networked governance, while others are more concerned with physical infrastructure or providing consolidated information for other partners.
But there was time to find out more about tourism on the ground too. Our Spanish partners were very enthusiastic about showing us their best practices through a series of fieldtrips and evening meals.  The region has built up tourism around their local wine industry, with an official wine route for visitors, and they also put on historical re-enactments.  We had the opportunity to sample both. Highlights included a tour through Medina Del Campo (experiencing a small re-enactment, sampling local produce and a visit to the palace/town hall) and a bus journey through their famous wine route (stopping off at wineries, restaurants and shops).
On the final day of the meeting the focus turned to policy instruments and, more importantly, how the group could influence them, with some useful discussion involving everyone. This is a key output of the project, and should provide some rich and nuanced results for future projects to learn from.  Next stop, Hungary! 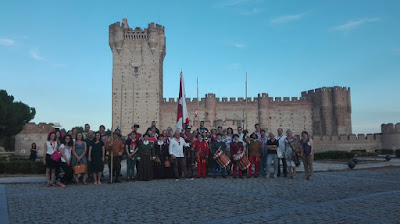 Anne Liddon, Science Communications Manager at CRE, responds to comments by local MP Guy Opperman about employment for older women.
Women Against Pension Inequality – the “Waspis”, – and also fellow MPs, shouted down Tynedale MP Guy Opperman recently when he suggested that the millions of women in their sixties who are facing a sudden hike in their pension age should get back into work via apprenticeship schemes.  Arguments about perceived injustices involved in such changes abound; while most people nowadays would agree that both sexes should be treated equally, for many years a prevailing narrative of growing mechanisation and increasing leisure implied that this could be achieved by allowing everyone to retire earlier, an aspiration that now seems absurd.
Putting such debates aside, however, what is wrong with the idea of learning new skills in your sixties?  Adult education classes bulge with older learners, keeping their brain cells and social networks alive.  But is further employment training for older people really the best use of public and private resources?  Apprenticeships are funded from a levy on employers and general taxation.  Do either companies or the tax payer relish the prospect of investing in training people who may only be working for a further ten years or so?  Even more seriously, won’t these older apprentices be depriving younger people of opportunities?
Perhaps Mr Opperman could approach the problem from a different perspective.  As an MP who represents a largely rural constituency in an area that includes several market towns, he might consider some results from research carried out by Newcastle University’s Centre for Rural Economy on rural in-migration.  We know that a significant proportion of people in their fifties and sixties who move to the countryside either do so with the intention of setting up a small business, or decide to take such a step once they have settled there.  Many of these are women who create micro businesses, working from home.
Small businesses may, of course, grow, begin to provide employment, train workers in new skills, and act as a key driver in the UK economy.  Some may even develop into much larger enterprises.  Two of the underlying principles from the Government’s Industrial Strategy Green Paper are: “Supporting businesses to start and grow” and “Driving growth across the whole country”.  The aspiration expressed within this document is for more innovation that reaches well beyond the larger towns and cities.  What an opportunity this could offer for women – and men – who have accumulated decades of experience and skills that they could now use to set up their own small firms.
Such developments could be a particular benefit in the countryside, where both young and old often struggle to find local employment.  The Rural Coalition has called on the UK Government to take positive action to “deliver a support programme for rural businesses and community entrepreneurs” and an investment in some underpinning services to help kick start new enterprises could prove very fruitful.  Our research in CRE certainly suggests that rural firms are an underexploited resource in the UK economy.  We know, for example, that many more of these firms have goods suitable for trading abroad than are currently exporting.  As products are increasingly traded on-line, accessing markets abroad should become more achievable, if small companies are actively encouraged to do so.
Improvements in infrastructure such as mobile phone coverage and broadband where it is currently lacking are, of course, essential.  But more targeted advice and support are also needed to encourage new and growing companies to fulfil their potential, particularly in rural settings.  Greater acknowledgement and help for women as well as for male entrepreneurs, better access to business expertise and sources of financial investment, would surely be a more imaginative, and potentially a more useful approach, than sending women in their sixties on apprenticeship schemes.  Rather we could be helping them to set up businesses that could provide such apprenticeships, training opportunities for younger people and longer term gains for the UK economy.