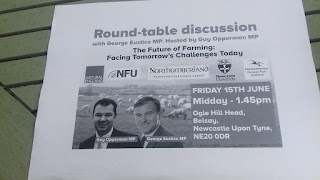 CRE Director Guy Garrod and colleagues were invited to an event with local MP Guy Opperman and Defra Minister George Eustice.  In our blog he shares some impressions of the discussion.
We were fortunate not to have been at Ogle Hall Head Farm near Belsay on Thursday, when Storm Hector did its best to blow our event venue up to the Scottish borders and was only prevented from doing so by the judicious placement of concrete blocks, the arm of a large digger and an enviable selection of potted geraniums.  Things had quietened down a bit on Friday when Newcastle University staff and students were among those who attended a Farming Round Table organised by local MP Guy Opperman.  He had chosen a suitably agricultural venue, in the heart of rural Northumberland, in a marquee that the canny farmer bought for £450 a few years ago and is now a useful asset in his diversified business.
Airport regulations, rather than the weather, conspired to cause the late arrival of the main speaker, long-serving Defra Minister George Eustice MP, who was due to speak about the future of food and farming after Brexit.  But he did make an appearance eventually and deftly fielded a range of questions around trade tariffs, farm tenancies, the proliferation of paperwork and other concerns, presenting a comforting vision of a future where farmers and local advisors would sit around the kitchen table reviewing the environmental performance of the farm, before filling in an application for the next round of funding.
Sue Bradley, who notices this sort of thing, highlighted the number of times the Minister used the word ‘reward’ and it was clear from his answers that he was firmly behind Defra’s vision of payments to farmers for supplying public goods.  Which public goods this included, how they should be provided, or how much they were worth, was less clear.  What was clear is that rather than the traditional approach of farmers receiving payments for income forgone – that is compensating them on the basis of the cost of supplying a public good, like improved biodiversity or public access – the Minister preferred an option where farmers were incentivised or ‘rewarded’ for their ability to deliver improvements to natural capital or ecosystem services. Such ‘rewards’ may well be judged to fall outside of the World Trade Organisations ‘Green Box’ of subsidies that do not distort trade or production and within the more distorting ‘Amber Box’. Even if the UK cannot persuade the WTO that payments to farmers for producing public goods are not trade-distorting, it is still likely that it will be able to take advantage of WTO limits around non-exempt support, which for the EU are still well in excess of its annual Amber Box declarations.
There remain questions around how these ‘rewards’ are to be earned and on their governance. Previous research involving CRE has revealed a preference among stakeholders for a more bottom-up approach to the design of agri-environment schemes and demonstrated the advantages of approaches that are based around landscapes, involving whole farms and farmers who work in partnership with NGOs and relevant public bodies, such as Natural England.  Perhaps this is the way forward for farm support in the UK, as we develop a culture of rewarding farmers for working together to deliver non-market goods and services appropriate to the landscapes within which they work?  This work would require local knowledge and expertise and should be funded in a way that recognises the societal benefits that land managers generate by reflecting both the costs incurred and a fair level of incentive.