Skip to primary content
Skip to secondary content
Academic Archers 2018 is a conference like no other.  This was the third Academic Archers get-together but the first at which Newcastle has had a presence.  As Archers fans, Duke of Northumberland Chair of Rural Economy Sally Shortall and Science Communications Manager Anne Liddon felt that the time had come for the Centre for Rural Economy to make its mark. In our CRE blog Anne Liddon shares the experience. 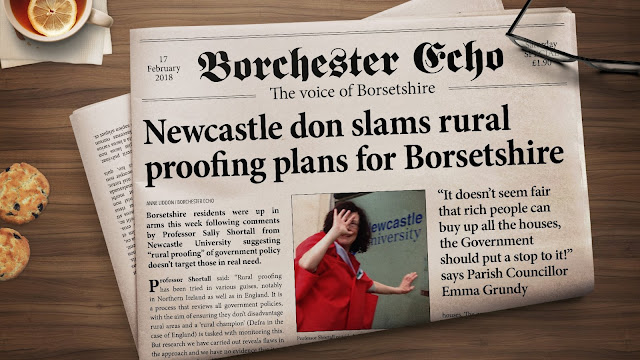 The Academic Archers owe their existence to Cara Courage, Nicola Headlam and Peter Matthews.  Their mission is to be an experimental form of academic community with The Archers as a lens through which wider issues can be explored.  Their values are to be “curious, generous and joyful”.  This was certainly fulfilled by the event on 17 February.  From housing problems (Ambridge experiences both ends of the spectrum – from rich parents who happen to have a spare cottage to young people unable to scrape together a deposit even for an “affordable” development) to an examination of metaphoric relationships with pets; from how the resident retired professor of classics might pronounce Latin, to Ambridge values on sexuality and gender, the topics were wide-ranging and creative.  One contributor was seeking out the names on the mysteriously elusive and never photographed Ambridge war memorial, while our neighbour from Northumbria University, criminologist Charlotte Bilby, was uncovering Ambridge’s offenders and how they have manifested over the years.
Fact and fiction tend to become rather intertwined at the Academic Archers. The moment at which Sally Shortall nudged me and hissed “Is that Susan Carter in the queue for the ladies loo?” will stay with me forever.  For indeed, Charlotte Martin who plays the role of Susan “Radio” Carter was with us to act as discussant on a session on “Women’s Talk?” where the phenomenon of gossip and its importance in Ambridge was mulled over in some considerable detail.  Charlotte is herself a real academic and practises as a psychologist.  Hearing her pontificate on these issues in Susan Carter’s voice was mesmerizing.
But the session on “Ambridgeology and Counter-insurgency doctrine” by the rather mysterious “political advisor” James Armstrong was probably the most surprising contribution.  Drawing on his experiences advising on counter insurgency in Afghanistan, he probed the possibilities for the more marginalized and disaffected characters getting involved in civil disturbances, or even more serious action.  As Archers Tweeters commented – he has no profile on social media and is “Armstrong” even his real name?  Could it rather be James…..007?
And our own contribution?  Modesty forbids us making too many claims other than that it was a triumph.  Professor Shortall held her own admirably and defended some controversial views about the rural proofing of government policy in the face of quite a grilling from a reporter who turned up from the Borchester Echo. The whole conference is available on video at http://www.johnpophamlive.co.uk  and this Newcastle highlight may be found in the section “Ambridgonomics” starting at around 1:13:15.