The CRE’s Dr Menelaos Gkartzios writes here about the Japanese take on “art in the countryside”, which he experienced first-hand last year during a 5 month stay in the country, and about exciting new opportunities made possible by the newly announced ESRC-AHRC UK-Japan Social Sciences, Arts and Humanities Connections Grant.

What does art do? And what happens if you take artistic practice outside the museum, the art gallery, the cultural quarter, the metropolis itself? I have been working on these questions for a couple of years now, mainly through the collaborative art residency that we run between the University’s Centre for Rural Economy and Berwick Visual Arts. This has offered a rich context to explore notions not only of engaged arts practice, but also of artistic research. A special section for the academic journal Sociologia Ruralis on ‘art in the country’ is forthcoming, edited along with Dr Julie Crawshaw (Northumbria University) and Dr Marie Mahon (National University of Ireland, Galway). There seems to be an increased interest in the rural social world in established art venues; for example the Whitechapel Gallery has been running an exciting session on ‘The Rural’, and Guggenheim has already announced the ‘Countryside: the Future of the World’ exhibition).

Meanwhile, in the far Far East, contemporary art is taking place in the countryside. Last year I was given the opportunity to do fieldwork in rural Japan as part of a visiting associate professorship post at the University of Tokyo. I came across a tradition of significant contemporary art festivals in the most remote and depopulated locations of rural Japan – many of them led by the Tokyo-based Art Front Gallery, following the vision of its director, Fram Kitagawa, who has received praise for his contributions in this field. It was fascinating to observe how some Japanese art professionals even dismissed the very idea of the art experience in museums and formal art spaces as ‘western’. Of course art is abundant in Japan – it’s a philosophy that enters the everyday: from arranging flowers, to serving tea, from separating the public and the private social spheres in performative ways, to writing Japanese syllables and Chinese ideograms. 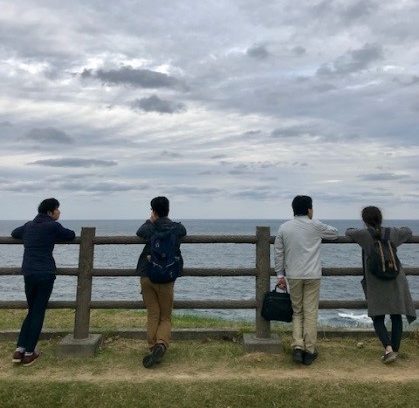 The research team at Oku-Noto

The most prolific of these art festivals has been the Echigo Tsumari Art Trienalle which takes place place in a disadvantaged mountainous area, but my fieldwork took place at the very first edition of the Oku-Noto Trienalle, also organised by Art Front Gallery, which coincided with my 5 month stay. Fieldwork included an ethnographic diary while attending the festival and visiting the artworks via structured bus guided tours, as well as in-depth interviews with visitors, curators and other art professionals, local policy makers and local community groups involved in the art-making. I would have never been able to do this work had it not been for my colleagues in Japan supporting this endeavour – particularly Dr Hironori Yagi and his students. We were a group, so important in Japanese culture.

The festival was so successful that it was difficult to find accommodation, so we stayed in a Buddhist temple instead – think of it: tatami rooms, low lights, emptiness. There was art even there. As I am going through my field notes of the festival, I read numerous stories about re-using abandoned buildings important for the rural community. At a closed school we rang the bells loud; a closed bath house – central in Japan’s social life – was filled with foam and people again. Nature is never to be underestimated in Japan and that was also evidenced in the artworks – some of them were actually destroyed because of typhoons. But nature was equally never glorified. Engaged artistic practice was abundant and residents talked with pride and strong emotions about being involved in the festival. And then there were the odd stories, the almost insignificant connections that the art festival made, that really mattered: getting lost and being looked after while cycling at night to view light installations; making friends. 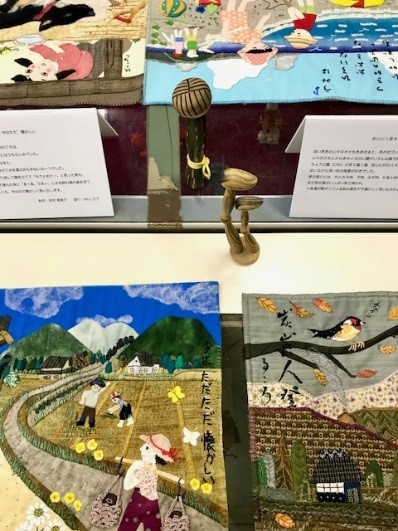 I am extremely excited to say that this is only the beginning. We will explore further this adventure of art in the countryside across Japan and the UK. Our collaboration has just received funding from the newly announced ESRC-AHRC UK-Japan Social Sciences, Arts and Humanities Connections Grant. I am delighted to lead, with our University Dean of Culture and the Creative Arts, Professor Vee Pollock, a new research network with the University of Tokyo, Art Front Gallery and our established collaborators in the wider region, Berwick Visual Arts and Scotland’s Stove Network. The research network aims to explore the contribution and potential of contemporary art in support of sustainable rural development. Stay tuned and get out of the city.

Dr. Ruth McAreavey, Senior Lecturer in Sociology at Newcastle University, writes about her recent visit to Westminster as part of a delegation from the CRE.

While walking down Milbank with colleagues from CRE in December, it really felt that we were at the heart of the action. Westminster was buzzing, demonstrators were out in full force, space on College Green was at a premium as the media pitched their broadcasting tents. This happened to be the first day of Teresa May’s 5-day Brexit debate extravaganza to allow MPs to debate the ins and outs of her deal. It was also the day that Lord Cameron was hosting academics from across the UK to discuss Brexit. Jeremy Phillipson, Guy Garrod, Mark Shucksmith, Fran Rowe and I were part of that delegation, representing the CRE. We had been invited to help present the key findings from four papers published by CRE that discuss the rural policy implications of Brexit for the four corners of the UK – Northern Ireland, Scotland, England and Wales. 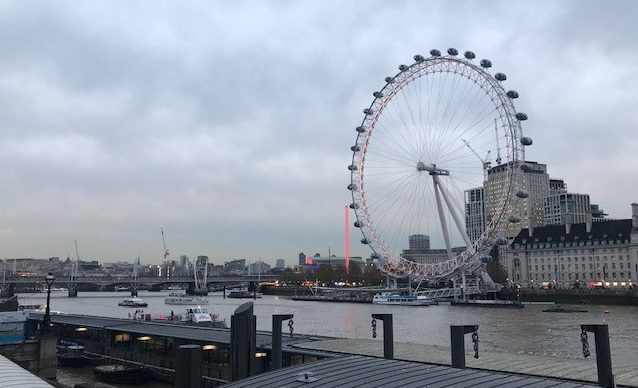 Before we were allowed to do so, we first had to navigate Westminster’s rather chaotic security system, which felt like something out of a Mr Bean movie rather than a genuinely effective measure to prevent acts of terror. Indeed, it was reminiscent of security at Marks and Spencer’s in Royal Avenue, Belfast, during the 1980s. Our detention in a rather small and stuffy waiting area gave my colleagues just enough time to raise my anxiety levels, stoking the fear that someone might ask me to explain the Irish backstop (which, thankfully, I didn’t have to do)! We eventually made it into the elegant committee room, with time for a bit of small talk before we got going. Notable from the outset are the different politics: Scotland and Northern Ireland voted to remain in the European Union, while England and Wales voted to leave, with geographic pockets of leave/remain existing across the UK.

As well as important political divergences, there are significant geographic differences between and within the four nations. This is especially the case for England and Scotland. The fragile upland communities of Scotland are remote and much less connected than the borders of that country. Meanwhile, according to the OECD, England is not remote, as the countryside has ready access to urban populations. Similarly, Northern Ireland has no remote rural categories. Anyone familiar with its geography will know that it’s easy to drive across the region in a matter of hours.

Not only do the four nations diverge on politics and geography, each nation has a number of unique Brexit-related concerns. Devolution is a particular issue for Wales given the areas of retained UK government powers that have direct impact on rural Wales, such as immigration. This has implications beyond agriculture, affecting food processing, manufacturing and health and social care. In Scotland, within the food and drink industry there are very real concerns that the specialised export markets, including for Scotch beef, farmed Scottish salmon, whisky and other fish, will be overlooked in trade negotiations that are likely to focus on larger sectors such as financial services or car manufacturing. Meanwhile, in Northern Ireland, the ‘Border Problem’ probably needs little elaboration. It has been the major blockage for the progression of May’s Brexit negotiations. Spanning 300 miles and encompassing 275 border crossings, the border is quite porous, and it lies at the heart of complex food supply chains, raising serious challenges for managing exports post-Brexit. 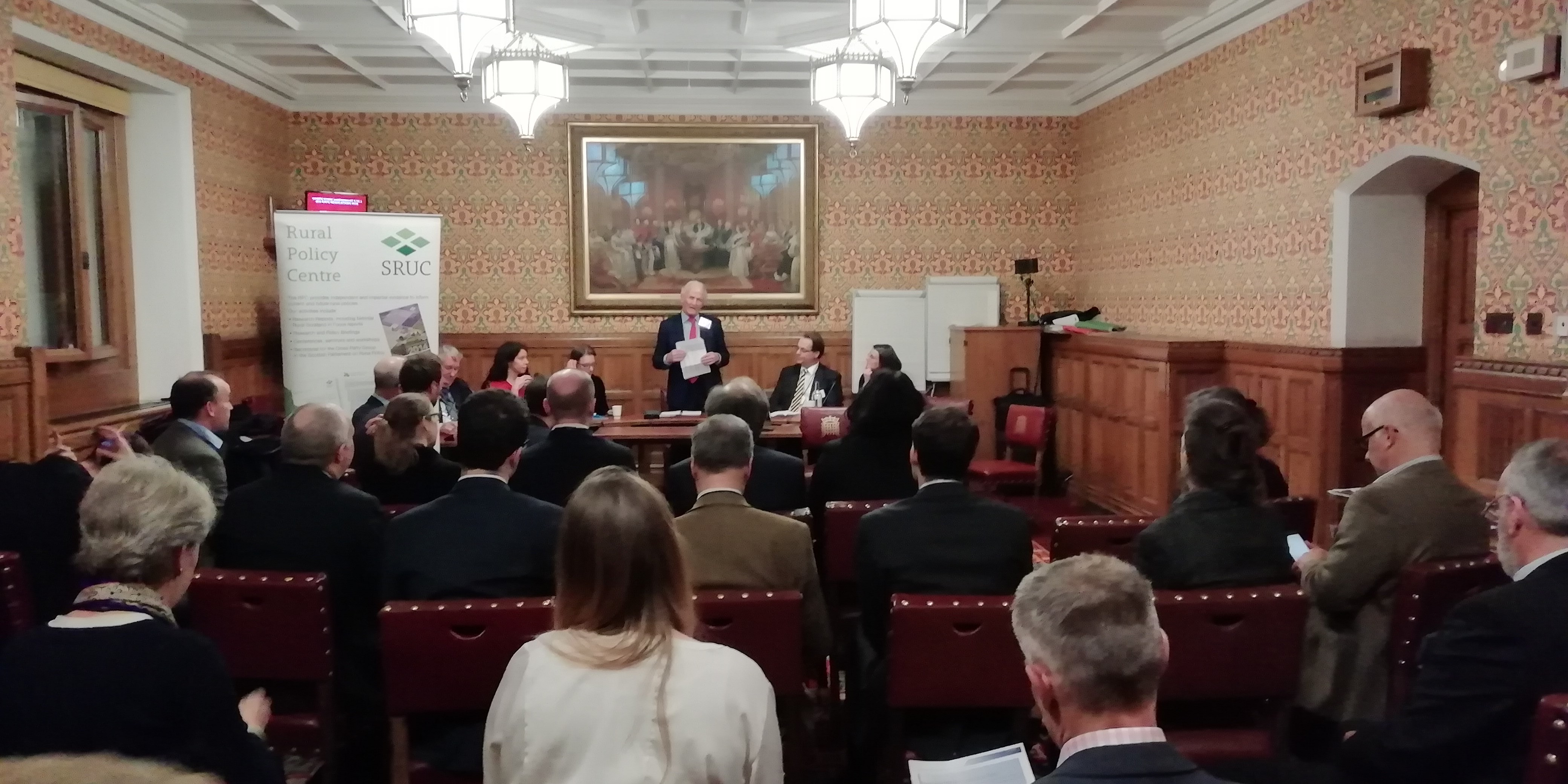 Rural planning varies across the UK. For example, the bounded nature of the English village has given the English countryside its idyllic character, but it has also led to challenges of rural housing, as locals often cannot afford to live in the places where they grew up. Rural communities themselves have changed a lot since the UK joined the EU in 1973. They continue to change, representing diverse traditional and cosmopolitan interests, all of which need to be carefully considered within future rural policies. Investment in sustainable infrastructure is essential to achieve rural economic growth in all nations through the mechanisms specific to each jurisdiction. For example, empowering and enabling English Local Enterprise Partnerships will be an important part of that process. Generally, the value of rural economies is often not fully understood, and the considerable public goods they produce are regularly overlooked. Going forward, and in the absence of the Common Agricultural Policy, it will be increasingly important to recognise these public goods to ensure their continued creation in the longer term.

The question of how to govern rural areas most effectively is shared across the four countries. While the context for doing this differs in the different jurisdictions, questions remain: Is a targeted rural policy desirable and/or effective? Can a single policy serve both urban and rural areas? Connected to this is the issue of funding. Both Northern Ireland and Wales have been net recipients of EU funding, but this level of funding is not guaranteed in the future. Who might champion rural needs in each of the four countries? Should funding be ring-fenced? Is there a role for rural proofing?

These and many other themes were picked up in the course of a lively Q&A session, during which it was noted that policymaking occurs in silos, even after decades of this recognised weakness. Someone provocatively asked ‘What’s the point of market towns?’ The intent of course was to stimulate debate rather than write off market towns outright. Many seemed to share the viewpoint that they have an important role, connecting both with their rural hinterland and with urban centres.

And that was the end of the formal proceedings, which were followed by some light refreshments and further chat. Walking out of the House of Lords, we took a detour through the Commons, extending our walk through the splendour of the buildings, marvelling at their wealth and sophistication. I couldn’t help but wonder about the juxtaposition of that grandeur against the shabbiness of the democracy that led to the Brexit vote.