In the latest CRE blog artist in residence Gemma Burditt  discusses the first of her interviews with Northumberland communities about their predictions of the change in land use post Brexit. 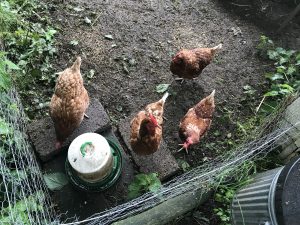 Chickens in Northumberland by Gemma Burditt

In June of this year I made my way back to Northumberland to continue my research on the implications of Brexit on the rural north, focusing specifically on how land use might change post Brexit.

One of the more optimistic predictions which Michael Gove has begun work on, is that Brexit might provide an opportunity for British farming to work hand in hand with conservation and be rewarded in subsidies for acts which serve to increase biodiversity, create cleaner water and a more sustainable future. Farmers may also be encouraged to diversify into greener enterprises such as renting out land for renewable energy production or ecotourism. I was interested to speak to land owners, farmers and land based business owners to see how optimistic they felt about a post Brexit future, their predictions, aspirations and firm plans for the next few years ahead.

The last time I had spent significant time in Northumberland was during the winter months of 2016 / 2017; so, as I travel north from Newcastle to Berwick, I look out of the train window to see a landscape bursting with Spring optimism. The trail littered with wind turbines allows me to dream for a moment that a greener future for the country and food production might be obtainable after all. But looking more closely at the patchwork of fields, I begin to really understand what the statistic of 70% of the UK’s landscape being made up of farmland really looks like. When I think of the countryside, what appears in my head is just this, acres and acres of carefully orchestrated crops grown for their lucrative value which is not exactly “natural.” In fact with the increasing intensification of production, farmland more often than not is an actively hostile place for insects, birds and plants. 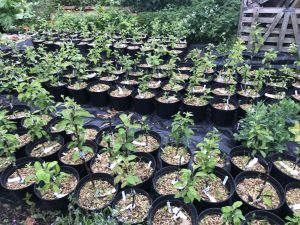 On the first day we meet two local land owners, one of whom tells us about how his land is made up: a farm in hand and several let out to tenant farmers with diversification into let out commercial properties and cafe. He has a genuine interest in conservation preferring to run a mixed farm while doing as much as he can to create woodland and habitats to increase biodiversity. He was fairly pessimistic about Brexit and was particularly concerned about the future of livestock farming as a no deal Brexit would mean paying tariffs of up to 45% on lamb and 60% on beef going into Europe. There was also concern that many farmers in the area cared a great deal about maintaining the highest animal welfare standards and if the markets opened up to the rest of the world, they would be competing against farmers who could produce meat more cheaply but perhaps not so stringently. This would perhaps result in many livestock farms going under. So what would this land be used for instead? His idea for his own farm was to take any unproductive land out of use to be used for forestry as it had the potential to be both profitable and increase biodiversity. 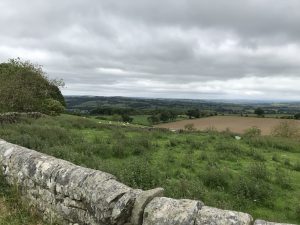 The following day I met with Nicola Bell who worked with the CRE on a number of research projects and now works on LEADER projects trying to help small business and community projects to become more sustainable. She was kind enough to take me up to St.Oswald’s church and show me the view north of this point. Standing along the trail of Hadrian’s Wall, Nicola points out Kielder forest and explains how previously the woodland had been commercial but was now focusing more on the visitor economy. We can see quarries, wind farms, farmland and the RSPB conservation area. What is striking is how every piece of land is owned and accounted for. Although Kielder is working towards a more visitor based economy working on several conservation projects, it is so striking how the way we value even the countryside and natural landscape is based so heavily on economic outputs.

It would be very difficult for new innovative land based projects to emerge within this landscape as it is so unlikely that any land in the area would ever come up for sale without being snapped up immediately for a high price. Nicola was doubtful that land prices would be set to fall in the area after Brexit even if farmers were to sell up.

In the neighboring area I meet with Mark, aligned with the permaculture movement with his young WOOFA (willing worker on organic farm) Sam. He talks me through his various land based projects including plans for a new orchard, a social enterprise where homeless people would come and help plant and maintain the trees grown. Mark shows me around his fantastic garden, including saplings destined for the orchard. It looks like something out of 70s TV sitcom “The Good Life” with every inch of land being used to grow vegetables, trees and fruits – often in inventive containers made from unwanted items. He explains how proud he is that he doesn’t own anything. After spending the week hearing words such as “assets, profits, outputs” my ears really prick up to hear such a phrase being uttered, and what a rarity to meet anyone who doesn’t aspire to ownership particularly of property or land. 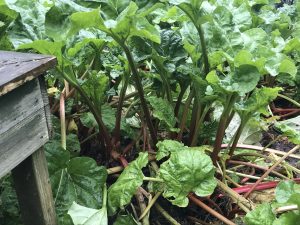 Some of the crops in Mark’s garden by Gemma Burditt

Obviously Mark is not aiming to stock the Sainsbury’s veg department so he is not under the same pressure as a regular farmer to maximise profits but it is difficult not to agree with the permaculture philosophy to “design intelligent systems which meet human needs whilst enhancing biodiversity, reducing our impact on the planet, and creating a fairer world for us all.” The permaculture movement has perhaps been sidelined as a somewhat hippy movement, but there seems real potential here to capitalise (sorry I know I’m doing it now!) on the wave of interest in locally produced food and create innovative community based projects as Mark is doing to bring people together through the love of growing.

There are several permaculture based veg box schemes in the area such as North East Organic Growers, a co-operative based near Bedlington all supplying locally grown organic produce to the area creating a sense of community and producing seasonal produce in a more sustainable way. Obviously this comes at a price and with an increasing percent of the population on stagnant incomes this is not an option for everyone.

On the way to Hexham I had seen a field which was filled with poppies. It looked like a memorial installation to commemorate the First World War, but after asking Mark about it, he explained that since Europe had banned certain weed killers, poppies had been easily able to grow again alongside wheat. I thought it was an interesting example of how European policy literally had changed how our landscape looked visually. Even down to the crops we are growing. Rapeseed for example, is soaring in popularity due to recent reports of olive oil prices spiraling after a poor European harvest and a bacteria outbreak affecting Italian olive trees. Rapeseed has such a striking yellow colour that it can dominate any landscape and challenge our concept of the British landscape made up of the traditional greens and browns. Rapeseed itself is also a controversial crop as it is often intensely farmed reliant on heavy use of pesticides and weed killers.

Finally we talk to a young researcher conducting tests into innovative crops which could grow in the UK partly in response to creating a more sustainable food production line and perhaps also with Brexit looming on the horizon; trying to find more profitable crops which grow easily in our climate. The two main trials were for Spelt and Buckwheat which again interested me in terms of the visual impact these would have on our landscape. The latter particularly having a striking appearance with fluffy white flowers protruding from the plant. A move towards a more plant based diet and unpredictable climate may also influence what we decide to grow in the future.

On the whole there was a lot less fear than I was expecting from a community so vulnerable to a no deal Brexit. There was also a unanimous feeling that the focus of the post Brexit agricultural policy would have to be working towards a greener and more sustainable future, although there was very little faith that the government would provide much support to aide these changes. Many were fastening their seatbelts praying that Boris Johnson didn’t get in – oh dear!

There were several more interviews conducted this week which I will discuss further in a future blog.