After attending ISO/IEC SC 27 WG2 for 4 years, I’m happy to say that J-PAKE is finally published in ISO/IEC 11770-4 (2017) as an international standard. In the mean time, J-PAKE is also published in RFC 8236 by IETF (together with an accompanying RFC 8235 on Schnorr non-interactive zero-knowledge proof). This is a milestone for J-PAKE. From the first presentation at Security Protocol Worksop ’08 in Cambridge to the publication in the international standard in 2017, J-PAKE has come a long way. The critical insight in the design of J-PAKE was based on understanding the importance of zero knowledge proof (ZKP), but this insight was not shared by other researchers in the field at the time. One main reason is that the use of ZKP was considered incompatible with the then-universally-adopted formal models in the PAKE field. However, in an independent study due to Abdalla, Benhamouda, MacKenzie and published in IEEE S&P 2015, the formal model for PAKE protocols was modified to make it compatible with ZKP, and the modified model was applied to prove J-PAKE was secure. The provable results are the same as in the original J-PAKE paper, but are constructed in a formal model, thus bridging the gap between theory and practice in the end.

Today, J-PAKE has already been used by many million users in commercial products, e.g., Palemoon Sync, Google Nest, ARM mbed OS, OpenSSL, Mozilla NSS, and Bouncycastle API. In particular, J-PAKE has been adopted by the Thread Group as a standard key exchange mechanism for the IoT commissioning process, i.e., adding new IoT devices to an existing network. The protocol has already been embedded into IoT products. The following video demonstrates how J-PAKE is used to securely enrol a new IoT device into the Thread network during the commissioning process (more details about Thread can be found at NXP, Thread Group, ARM, Silicon Labs and Google Nest’s Open Thread). It’s expected that in the near future, J-PAKE will be used by many billion Thread-compliant IoT devices for the initial bootstrapping of trust.

Today, we ran the first campus trial of a new e-voting system called DRE-ip. The DRE-ip system was initially published at ESORICS’16 (paper here), and since then we have been busy developing a prototype. In our current implementation, the front end of the prototype consists of a touch-screen tablet (Google Pixel C), linked via Bluetooth to a thermal printer (EPSON TM-P80). The backend is a web server hosted in the campus of Newcastle University.

The e-voting trial was conducted in front of the Students Union from 11:00 am to 2 pm. We managed to get nearly 60 people to try our prototype and fill in a questionnaire. All users provided us useful and constructive feedback (which will take us a while to analyze in full detail). The general reception of our prototype has been very positive. The prototype worked robustly during the 3-4 hours trial. Apart from the occasional slight delay in printing a receipt from the thermal printer, the system worked reliably without any problem. This is the first time that we put our theoretical design of an e-voting system into the practical test, and we are glad that it worked well to our expectation on the first trial. 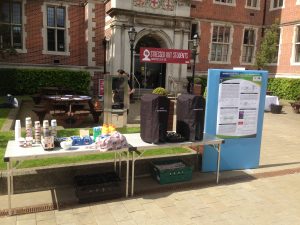 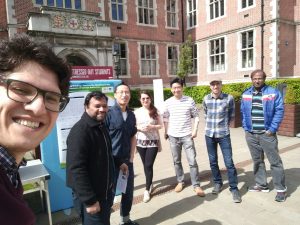 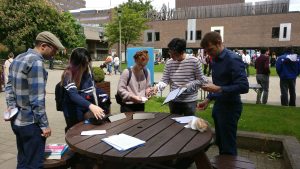 During the trial, we asked the user to choose a candidate from the following choices: Theresa May, Jeremy Corbyn, Nicola Sturgeon, Tim Farron, None of above . The tallying results are a bit surprising: Jeremy Corbyn won the most popular votes! However, the voting question we used in our trial was meant to be a lighthearted choice. Our main aim was to test the reliability and usability of the prototype and to identify areas for improvements. Many users understood that. 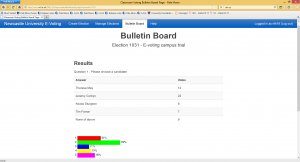 Today’s trial was greatly helped by the nice weather, which is not that usual in Newcastle. Everyone from the project team tried their best. It was a great teamwork, and it was great fun. When we finished the trial, it was already past 2:00 pm. A relaxed lunch with beer and celebration drinks in our favorite Red Mezze restaurant is well deserved (which I should foresee no problem in justifying to the ERC project sponsor). 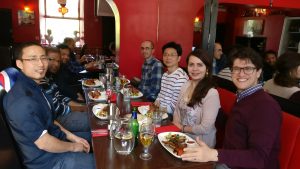 We plan to analyze and publish today’s trial results in the near future. Keep tuned.

Members of the research group in Secure and Resilient Systems at Newcastle University are currently preparing a new MOOC (Massive Open Online Course) on the practicalities of Cyber Security. The three-week course Cyber Security: Safety at Home, Online, in Life will be running on the FutureLearn platform from 5th September 2016. 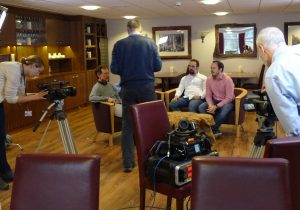 Although it’s the first time our group has participated in MOOC development, it’s the 5th course that Newcastle University’s Learning and Teaching Development Service (LTDS) will have delivered, so we feel we’re in safe hands. Our aim is to introduce course participants to current topics in cyber security research and show how they relate to everyday life: privacy of data, safety of financial transactions, and security implications of smart devices, to take three examples.

For us as researchers and lecturers in security and resilience, it’s an interesting and sometimes challenging process to think about how best to present material in this medium. We’re moving from research papers and presentations, lectures and coursework assignments to short articles, discussion topics, quizzes and video. We hope it will be of interest to anyone with some background knowledge in cyber security and an interest in finding out current practice and research directions in this area.

We hope you can join us on 5th September! You can register for the course at https://www.futurelearn.com/courses/cyber-security.

We are pleased to announce the completion of a new book “Real-world Electronic Voting: Design, Analysis and Deployment”, which is due to be published by the CRC Press. It’s still in press, but you can pre-order it from Amazon (the book will be freely available in the open-access domain two years from its publication).

This book is co-edited by Peter Ryan and myself. It aims to capture all major developments in electronic voting since 2003 in a real-world setting. It covers three broad categories: e-voting protocols, attacks reported on e-voting, and new developments on the use of e-voting.

The J-PAKE key exchange protocol, designed by Prof Peter Ryan and myself in 2008, has been built into the Nest thermostat products (Nest was bought by Google in 2014 for US$3.2 billion). A technical white paper that describes the implementation has recently gone public (13 July, 2015).

Besides the Google Nest, J-PAKE has also been used in other commercial products. Since 2010, J-PAKE has been used by Mozilla Firefox to implement secure sync and deployed to over 400 million internet users. Recently, Mozilla Firefox starts to deploy a different mechanism (less secure but more usable than J-PAKE) for sync. However, the Palemoon browser, a popular fork of Firefox, retains the original J-PAKE based mechanism for preserving full security in protecting sync data (which contain sensitive user passwords). In the ISO/IEC SC 27 meeting held in Mexico City in October 2014, it was unanimously supported by national bodies in Work Group 2 to include J-PAKE into the ISO/IEC 11770-4 standard. The standardization of J-PAKE is currently in process and expects to finish in another two years.

The original J-PAKE paper was initially rejected by major conferences in the field, as the protocol design was based on a new method and didn’t follow any established approaches in the main stream at the time. The paper was eventually accepted and published by a small workshop (Security Protocols Workshop’08) held locally in Cambridge, UK in 2008. After 7 years of test by time, it is pleasing to see that the J-PAKE technique and its basic design ideas are being gradually accepted by the academic community and the industry.