Along with the launch of Windows Server 2012* yesterday, Microsoft released the Windows Management Framework 3.0 for some downlevel clients. In the package you get PowerShell 3.0, and updated versions of WMI and WinRM for Windows 7 SP1, Windows Server 2008 R2 SP1 and Windows Server 2008 SP2. If you were looking for support on XP and Vista you are out of luck.

WMF 3.0 also contains the Server Manager CIM Provider that you’re going to need on your 2008 R2 SP1 and 2008 SP2 servers if you want to manage them with the new Server Manager in Windows Server 2012 or Remote Server Admin Tools for Windows 8 (RSAT for Win8 is yet to reach RTM).

* Make sure you click that link to the online launch event; windows-server-launch.com has a load of learning resources for Microsoft’s amazing new Server release, especially around management and virtualisation.

I recently needed to connect my phone to a wireless network and the only connectivity available was a wired VPN on my notebook. It turns out that in Windows 7 and Windows 8 it is possible to turn a wireless enabled machine into a hotspot that any device can use!

Where  <networkname> is your choice of name for your Hotspot and <password>is a strong secure password.

2) This will create a connection called ‘Wireless Network Connection 2’ which is a Microsoft Virtual WiFi miniport adapter. Rename the connection as ‘Wifi Hotspot’ 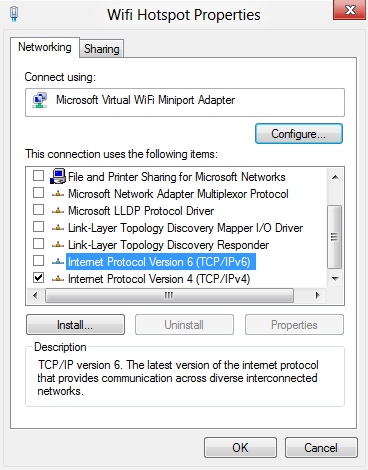 4) Browse to the properties of the Internet connected adapter or VPN connection and select the sharing tab. Tick the first box as below and select Wifi Hotspot as the Home n. 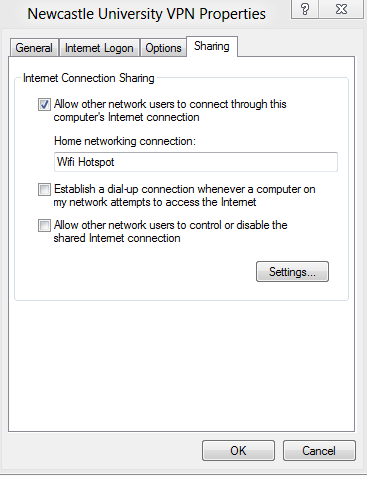 5) Create a shortcut on the Desktop called ‘Start WiFi Hotspot. This will let you switch on the hotspot on without having to type the commands. In the location box type:

6) Create another shortcut on the Desktop called ‘Stop WiFi Hotspot. This will let you switch off the hotspot on without having to type the commands. In the location box type:

7) Note: The shortcuts must be run as an Administrator (Right Click > Run as administrator)

8) And that’s it! You should now be able to connect to your hotspot and use the internet wit other wireless enabled devices such as your Phone, Console or other laptops

To remove the settings run the command below and do change the WiFi Hotspot name or password just run the first command again with the new details.

It’s been a while since I did these stats, and I don’t think I’ve ever blogged them before, but I was prompted to check this after hearing Microsoft say that Windows 7 has overtaken previous versions worldwide.

It turns out that even though there hasn’t been any particular institutional drive towards Windows 7, thanks to the efforts of pro-active staff across the University, it does now significantly outnumber all other operating systems in our Active Directory combined! In the last 3 months, the breakdown of computers is…

There are an unknown number of machines that aren’t connected to Active Directory, but the spread of those won’t affect this a great deal.

Another interesting stat that I heard recently came from Dell. They now predict that 50% of all server workloads are virtualised. Thats probably about true here – I’ll see if I can get those stats later.

Incidentally, the breakdown of Windows servers in our AD sees roughly equal numbers of Server 2008 R2 and Server 2003 (just over 200 of each), and just over a hundred running Server 2008.

If anyone is interested in grabbing these stats in their own organisation (or OU), then it’s just a simple bit of PowerShell using the Quest AD cmdlets…

(That’s just 3 lines of code, but it could be fewer. The ` character extends the line in PowerShell)

Thought I would blog on something that I only learnt last year but has been a great time saver for me.

Holding down ‘Shift’ when right clicking in explorer gives some extra very handy options including ‘Open a Command Window here’ and ‘Copy as Path.’

Also, several files types have other contact sensitive options for instance Office files can ‘Open as read only’.

We recently got a batch of new workstations on campus that are using USB3 for half of the supplied USB ports. We had some problems during the WDS setup of these as there is no native support for USB3 in WinPE 3.0 as supplied with Windows 7 Service Pack 1, and of course our WDS boot menus use WinPE 3.0.

After hitting F12 to initiate the WDS setup WinPE happily loaded but obviously offered no mouse or keyboard support when using the USB3 ports. Okay, you could swap mouse and keyboard to USB2 and this would immediately resolve the issue. However, best to get the USB3 drivers into PE. I did this using the driver injection method as blogged about previously: WDS How To – deploy drivers See the section titled: “Boot image driver injection has become very easy!” (WDS dynamic driver management is excellent, I may have mentioned that before… )

For those of you who don’t know, USB3 ports are coloured blue on the inside, so you can easily spot them if they’re there:

Since the release of Windows 7 SP1, people who installed the Service Pack before installing the RSAT package weren’t able to do so (although if you installed RSAT before SP1 you were fine).

Microsoft have resolved this with the release of Remote Server Administration Tools for Windows 7 with Service Pack 1 (SP1): http://www.microsoft.com/downloads/en/details.aspx?FamilyID=7d2f6ad7-656b-4313-a005-4e344e43997d

Some people make use of the “Connect using different credentials feature” when working with different permissions is required:

It seems that this can sometimes result in the error message “The network folder specified is currently mapped using a different user name and password” error message.” The message can occur even when this is not the case!

Microsoft state that this behaviour is by design and provide a workaround.

This does seem to work but requires that you know the name of the IP of the server you are connecting to. This can easily be found out using the command:

This may not be news to many but I’ve only just found this out so thought I would share on the Blog. For some reason I cannot fathom Microsoft decided to change the behaviour of Windows Explorer in Windows 7 to not expand folders in the Navigation pane.

The way I work means this is massive pain for me so I was happy when I found out how to fix this: