In our latest Institute for Social Renewal blog we look back at our recent discussion event focused upon the implications of the European referendum.

The impact of leaving the European Union (EU) and the North East region was a focus of discussion on 3rd July 2018 that attracted a large audience of members of the public, business leaders and academics as well as Political Reporter Fergus Hewison and subsequent BBC Newcastle radio coverage (https://www.bbc.co.uk/programmes/p069r1rq). We heard from an expert panel of speakers that included Professor David Bailey from Aston University who is a columnist, media commentator and influential business expert on economic restructuring and industrial policy, perhaps best known for his knowledge of UK and West Midlands car manufacturing; Professor Danny MacKinnon, Professor of Regional Development and Governance and Acting Director of the Centre for Urban Regional and Development Studies, Newcastle University, an economic and political geographer, with expertise in economic and regional development; Dr Cathrine Degnen, Senior Lecturer in Social Anthropology, Newcastle University, and successful Economic and Social Research Council award winner on Identity, Belonging and the role of the Media in Brexit Britain and James Ramsbotham, Chief Executive of the North East Chamber of Commerce, that represents 3,000 businesses in the region. 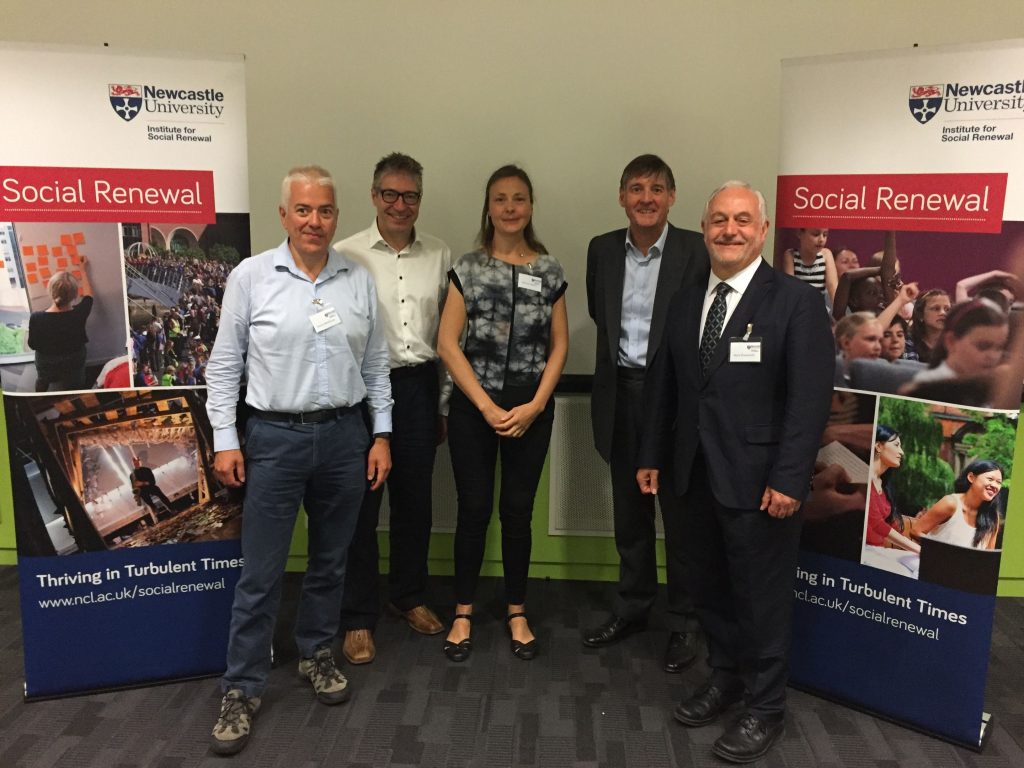 Nissan is the region’s largest private sector employer and Professor Bailey talked about the implications of Brexit on the car industry which will depend on a number of issues including what the final trading arrangements will be between the UK and the remaining EU countries and the economic policies of the UK post-Brexit.  Regardless of the terms of the exit deal, most economists consider that leaving the EU will have a detrimental impact on the UK’s economy but the risk to the economy is greater the more we deviate from current EU arrangements as the EU is the UK’s major trading partner.
The UK auto-sector is successful and has the highest productivity in Europe, it has attracted £8bn of investment over the last 3-4 years and the broader industry employs over 800,000 people, some of whom are highly skilled workers from the EU. Over half (57%) of our auto-exports are to the EU and the success of the auto-sector is linked with being a member of the Single Market and the recent falls in exchange rate depreciation. Risks to the car industry post-Brexit include slower economic growth and hence lower car sales, investment delays and export delays.  Although the lower exchange rate may help exports, there is the potential that the imported components for car manufacture are higher, risking the profitability of the UK plants and the current uncertainty of the Brexit deal may mean that auto-makers place work with non-UK plants.

Professor Danny MacKinnon outlined that the terms of the Brexit deal negotiations are heavily shaped by Westminster and there is a sense that Brexit is reigniting fundamental questions relating to England’s governance. There is a great deal of uncertainty surrounding the outcome of the Brexit negotiations and some conflicting analyses and predictions about what this will mean for the economy and the regions.  Older industrial areas tended to vote strongly for leave and regional inequalities are likely to increase as a result of Brexit where there is the risk of increased marginalisation in the North East and Midlands post-industrial areas.  Additionally, the government’s proposal to remove direct payments to farmers also has potentially wide ranging implications beyond Brexit as 70% of farms will be loss-making without this subsidy and the proposed Industrial Strategy represents a science-led and sectoral approach rather than being place-based.
The Brexit vote has been linked with the rise in populism and economic nationalism internationally and the current Brexit negotiations reflect Westminster’s voice rather than those from the regions and their localities, although there is lobbying from the regions.

Dr Cathrine Degnen described the background to her forthcoming Economic and Social Research Council funded research, ‘Identity, Belonging and the role of the Media’ in Brexit Britain. Media depictions of the leave and remain voters are deeply polarised based, amongst other things, on region, age, education and income.  Much of the research about ‘Brexit Britain’ is based on large surveys and aggregated data. Survey data is useful but her forthcoming research will enable a deeper understanding to be gained as it will provide an opportunity to explore the complex national, regional and local histories and explore peoples’ views and feelings about the vote.  The role of the media and how everyday use of the media frames people’s identity formation and questions of immigration, national and European belonging will be explored.
Her research will be spread across six sites nationally (Newcastle and Sunderland, Exeter and Devon, and Leicester and Boston, Lincolnshire) and will involve 12 months of community-based ethnographic fieldwork involving participant observation and interviews with people of different ages, from different social classes, ethnicities and with a range of migration and citizenships. How participants’ attitudes are shared and reproduced (or not) within families, across generations, amongst friendship networks and neighbours will be explored.

James Ramsbotham, Chief Executive of the North East Chamber of Commerce represents the views of their 3,000 members’ businesses in the region that includes small and medium enterprises up to multinationals. Surveys of their members has enabled the Chamber of Commerce to fully engage with business leaders’ views, the majority of whom are in favour of remaining in the Single Market and Customs Union.  Smaller businesses are less likely to be in favour of this because they tend to have local / UK customers and supply chains than larger businesses so any effects of customs and border controls are considered not to directly impact on them, but any downturn in the economy due to Brexit will affect their businesses too as local people will have less money to spend on goods and services.

Brexit has potentially huge implications for businesses nationally and in the region and there is and a lack of guidance and a feeling of unpreparedness from the UK government, especially in the event of leaving the EU without a deal. As a region, we export a much greater percentage of our products to Europe than elsewhere in the UK and we are heavily reliant on the export market. Leaving the EU without a deal will mean an increase in customs staff will be needed, and no recruitment or training of UK customs appears to be underway. To support local businesses to prepare for Brexit, the North East Chamber of Commerce has produced a guide ‘Business Brexit Checklist’ (https://www.neechamber.co.uk/updates/knowledge/blog/business-brexit-checklist-cross-border-trade ) to help local businesses through the transition period.

Following the presentations, there was the opportunity to ask the expert panel questions and a rich and lively discussion followed. Key questions from the discussion are included in the Brexit and the North East Report.