Peter Hetherington chaired the joint Carnegie UK Trust and Newcastle University Institute for Social Renewal event in North Shields on 11 July 2017, the discussions of which are summarised below. Peter is past chair of the TCPA, was a member of the government’s urban sounding board and a board member of the former Academy for Sustainable Communities. He is also a former regional affairs editor of The Guardian. 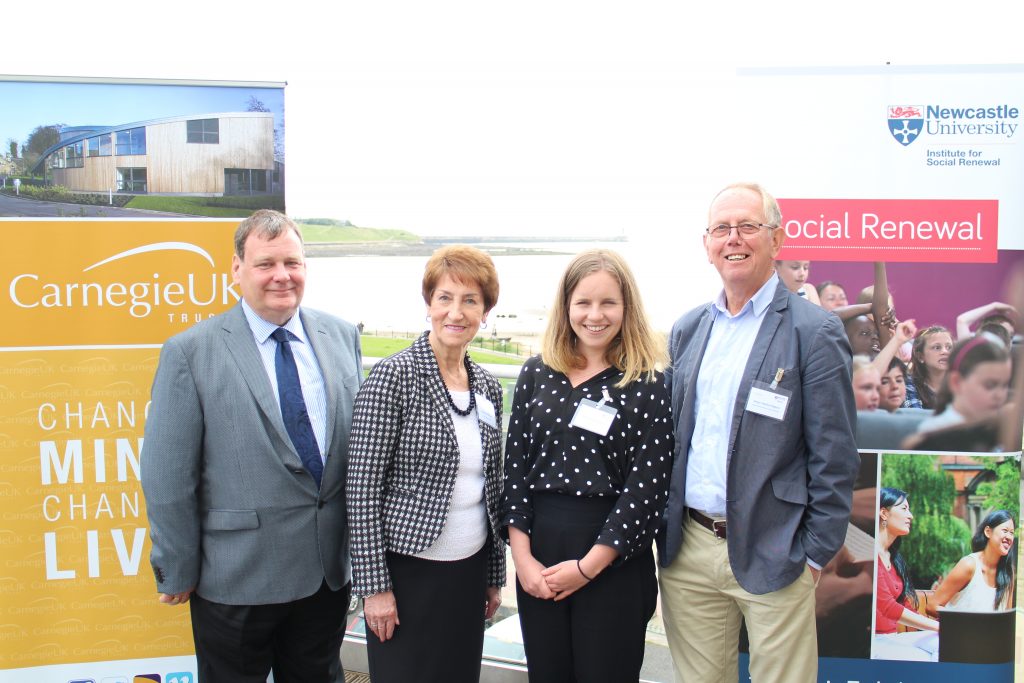 I grew up, and started work, in a smallish city. It was surrounded by a clutch of even smaller towns. What’s surprising is that, throughout my formative years – the 1960s into the early 70s – they were (in the case of the city) largely self-governing, a ‘county borough’ in the officialise of the time.

Throughout over half of the last century, a small city was a big democratic player – for a period providing electricity, gas, water, public transport and, of course, education and social care. These institutions civilised Britain long before a national government developed any social agenda. And that went for small towns too. Just look around England, Scotland and Wales and you’ll still see remnants of truly local democracy: town halls, often sadly neglected and partly abandoned, that once provided a focus of local action and service delivery. Think royal burghs (in the case of Scotland) and town councils in England (which still sometimes exist as glorified parish councils).

But from the 1970s onwards, through rounds of local government ‘reorganisation’, these small councils were swallowed up by larger authorities. Local identity – that essential element of pride, belonging, a sense of place – went out of the stained glass windows which sometimes adorned these fine sandstone buildings. As countless citizens will attest – me included – bigger hasn’t always been better.

So what to do? If we can’t turn back the clock, we can at least – as Carnegie UK Trust’s ‘Time for Towns’ project emphasises – consider how towns might have a greater say over decision making as part of a continuing policy debate surrounding community empowerment and ‘devolution’. In English terms, that latter noun briefly meant devolving some power to five ‘city regions’, such as Greater Manchester, in mayoral elections earlier this year. The initiative was meant to be rolled out elsewhere. But it’s stalled. The government seems to have gone cool on the idea.

In its limited form, however, this initiative did tell us something about a national policy mindset which sees big cities, and surrounding conurbations, as the drivers of a regional economy – in much the same way as London is seen as a motor of the national economy.

It’s time to challenge these assumptions. As Carnegie UK Trust’s recent ‘Turnaround Towns’ report emphasises, millions of us don’t live in big cities but, rather, in small and medium-sized towns – some thriving, some coasting, many struggling.

I was lucky enough to chair a joint Carnegie UK Trust and Newcastle University Institute for Social Renewal seminar in North Shields in July designed to address the turnaround issue, with case studies from eight places: the USA to Australia, New Zealand, Germany and Finland.

North Shields? Still partly a fishing port, it’s at the mouth of the River Tyne, and now – courtesy of local government reorganisation in 1973 – forms part of the North Tyneside metropolitan borough, which also embraces the neighbouring coastal towns of Tynemouth and Whitley Bay. North Tyneside, in many ways, is typical of much of Britain: poverty and plenty cheek-by-jowl. North Shields, perhaps seen as a poor economic relation, has a spectacular quayside, trendy bars, up-market flats and a poorer housing estate which has had its troubles in the past.

The mayor of North Tyneside, Norma Redfern, a retired primary head teacher, who opened the event, spoke passionately about the importance of community, belonging and partnership in the quest of ‘turning towns around’. Above all, she said, councils must put residents first. This was no synthetic comment. As the only elected executive mayor in the Tyne and Wear conurbation, she heads an excellent authority which boasts high-ranking schools and considerable ambition, often directed to turning round its most challenging areas.

As the past chair of the Town and Country Planning Association (TCPA), Britain’s oldest housing and planning charity, I am helping lead a project which specifically addresses those forgotten parts of England – for instance, former industrial towns and villages – which time, and government, seems to have forgotten.

In England particularly, there’s a policy vacuum, an asymmetric system which places, and sometimes rewards, big cities and conurbations, while forgetting outlying areas which contain the bulk of the country’s population. The tide has to turn. Let’s cooperate in driving forward a common agenda. A new era for towns? Why not?