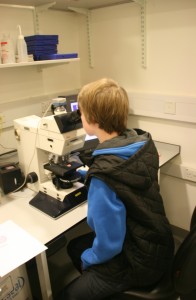 On 5th December 2012 we hosted an open day for A-level students from the schools around the North East. We invited 80 A-level students from 8 schools to have a look around the labs, learn a few techniques, hear exciting talks about the current research at the IGM and participate in the ethical debate about animal use in science, which was all very well received. The most successful part of the day by far was the session where the students had a chance to ask questions and discuss research with a patient who is also a scientist here at the IGM. They commented it has showed them a direct link between the disease and scientific research done in the institute. We also ran a workshop on University applications and an informal session with undergraduate representatives, which gave the students a bit of a flavour of what life at Newcastle university may be like and what it has to offer. 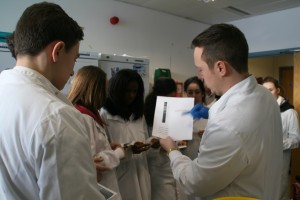 This was a first large event organised by the Public Engagement Committee and it was generally well received. We got a mention in the React magazine where you can read more about this event: http://reactmagazine.co.uk/anybody-out-there/public-engagement-school-kids-and-science/ and we will be organising more events of this kind in the future.

We would like to thank all the people who volunteered to help with this event.