This excellent introductory session identified the different methods and styles of communicating. It also emphasised that there needs to be a shift from the communication deficit to a dialogue model where the public is actively encouraged to participate and engage with science. The scientists are often perceived as inhabiting their academic ivory tower and employ the old fashioned “transmit” model of communication, based on the traditional lecture format. More interactive methods are needed to engage with the public, as suggested on the diagram below.

Resources for getting started:

A truly inspirational talk about the key issues in science communication from a personal perspective. Jess was discussing the universal themes important in communicating using examples from personal experience and life with a difficult condition. She energised and enthused everyone. The main point raised by her during the talk was that communication is important but there is no recipe for it. Here are some of Jess’s tips for brand new science communicators:

Primarily focusing on the barriers associated with engaging with children, the panel’s expertise helped to highlight several areas that should be considered for future engagement activities.

Dr Laura Hobbs, who actively engages with under 5’s through her “Science from the Start” program, highlighted the need to think about the timing of the event and recommended to have several sessions at different times of day and day of the week so that as many families as possible are able to attend the same sessions. Dr Sarah Bearchell meanwhile emphasised the importance of the layout of the room. Through her freelance program, “Sarah’s Adventures in Science”, she visits schools to engage with the children. She explained that by arranging the chairs in a semi-circle around a focal point with the props to be used already on display when the children enter the room, they can be primed for learning before they’ve even sat down. Finally Renee Watson’s company specifically engages with sections of the public who don’t normally interact with science and she reinforced a point made by the previous panel members: “emphasise the science that is relative to the audience”. This makes the format simple and accessible but not insulting by simplifying the content too much. It’s also important to bear in mind that the audience and especially children may be more aware of scientific ideas than expected. Moreover, when collecting the vital evaluation feedback, it is important to obtain feedback from both the parents/teachers and the children.

Does dialogue actually do anything?

A few interesting points were raised during this panel discussion about the improtance of dialogue in policymaking. 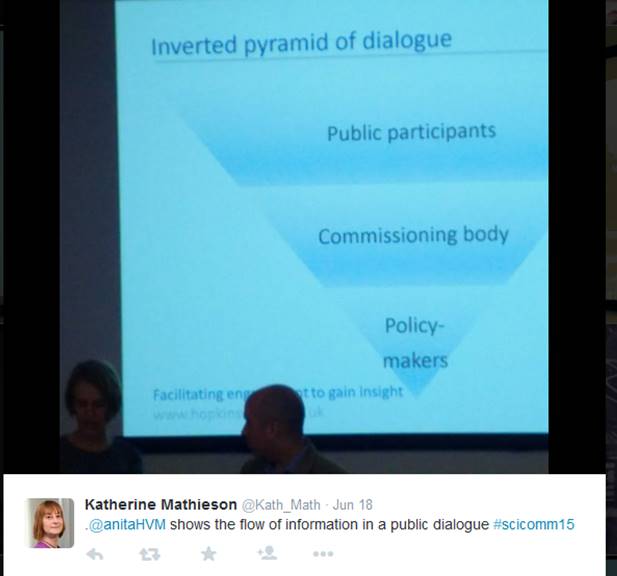 Robin Clarke was representing Sciencewise, a programme to improve Government policymaking iby increasing the effectiveness with which public dialogue is used. He stated that good dialogue approaches often originate from local governments and the health sector and that it is important to let people know that they can make a difference at the government level. He mentioned that pre-dialogue appears to often be missing from the policymaking set-up, and that dialogue should be structured to include raising awareness (using media to inform), explanation and follow up sessions. The impact of dialogue is difficult to measure hence the apprehension towards including it in policymaking, however, some projects have been halted upon public consultation, further highlighting the importance of dialogue. Melanie Smallman (UCL) added that dialogue is currently not impacting on the policies due to the differences in the language used. The problem also lies in different approaches, as the public cannot separate the benefits from the risks – something that policymakers like to consider separately. Therefore, opinion polls and stakeholders are often used instead of the real dialogue. She suggested that phrasing the question correctly and explaining the issue clearly may help overcome these issues. Anita Van Mil from Hopkins Van Mil, dialogue facilitators, added that creating better content and connections, helping people to relate to the subject better and using a facilitator as a mid point in dialogue may also help include it in future policymaking.  [Hopkins Van Mil offer work training and PhD projects in dialogue and communications]

This interesting session dealt with the importance of telling stories. SC explained that telling stories allows to draw the audiences in and by making the stories emotional and personal, allow the audience to relate to them. They are a brilliant tool in engagement and communication, making the content more relevant to the audience. DK (coordinator of the Bad Bugs Book Club) then added that entertainment has the power to shape the way we think about things and that we should explore the links between science and entertainment (https://twitter.com/scientlab). He added that media are not a good vehicle to convey scientific facts but a great way to convey excitement and spark curiosity and that scientists should get involved in media consultation to prevent mystification, reverence and disillusion with science.  MS (https://twitter.com/scienceartreach) described narrative non-fiction as a perfect medium for science communication. Crafting stories in a literary style allows to simplify them, contract time and blur detail. However, there is a responsibility on the researcher not to lie, not to oversimplify and to make the material relateable and well researched. “A good narrator lets you know every now and then that you’re actually reading the story [RadioLab]”

Can science communication save the world?

This rather open ended session title led to an interesting Q&A and discussion. The panel all work closely with patient groups or members of the public. Dr Mathew Sullivan (who spoke about his involvement working with Parkinson’s UK) and Nike Hardman spoke about their experience managing patient expectations of scientific research and particularly clinical trials. Dr Sonya Hill meanwhile spoke about her work with the zoo’s and the tricky balance between running a business and maintaining the welfare of the animals. The session covered a lot of topics, but the discussion kept coming back to the key issue for science communication which is the publics’ perception of the science. Several interesting points were made during the discussion:

A guide to creating toolkits

An inspiring session outlining some resources available online for creating toolkits for engagement and communication events. KL explained the ethos behind the FunPalaces – self-generating, self-funding and self-organising ways to engage with the public in a creative way. Their website provides guidelines, templates, risk assessment forms and anything one needs to start their own Fun Palace. OB told a story of the project she coordinated, Experimental Project – Bringing Science Home, a series of videos and short experiments that could be performed at home, which were then backed up by toolkits and easy to follow .pdf sheets with instructions. MP suggested that when creating a toolkit one should consider: who needs it, what problems would it solve, is it more exciting than what’s currently available, what is the target audience and their knowledge, can it be used by teachers the way they want to use it, how will the audience to hear about it, and what is the pitch. OB suggested to use terms that people would be searching for anyway, when creating shareable content.

An interesting panel discussion, especially as Kelly Oakes was only able to attend over Skype. Each panel member provided examples of the types of shareable content that they have had experience producing. Kelly Oakes is the science editor for Buzzfeed and so showed examples of the articles and quizzes that they produce. Victoria Gill produces videos and articles for the BBC including one which she showed about the recent solar eclipse. And Dr Marieke Navin is the director of the Manchester science festival at the Museum of Science and Industry (MOSI) where she helped launched “Hooked on Music” – an online game which also collected data for a study on what makes music catchy. The success of this shareable content helped gain new scientific understanding in this area of research.

The speakers made several key points about what effective shareable content should include, such as: