DNA is the building block of all living things. Our own DNA dictates what we look like, how we behave and even how we think. The Human Genome Project sequenced all of our DNA to unravel the code that creates us to give a better understanding of how it all works. From this we’ve learned more about how we’ve evolved and which animals are our closest relatives.

The Wellcome Trust are planning on sequencing the DNA of 25 more animals next year and you get to have a say in which animals will be studied. Scientists from across the country have been championing species which they believe should be sequenced next. Our very own team of researchers from Newcastle University are campaigning for the Abyssal Grenadier, a deep sea fish which has evolved to live in one of the most extreme environments on Earth. 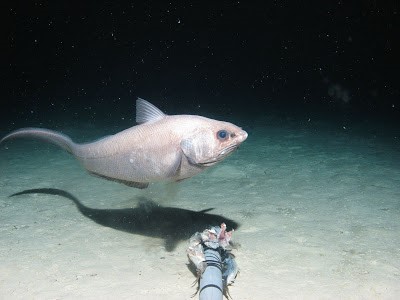 The competition is being held online on I’m a Scientist, Get Me Out Of Here where our researchers, Johanna Weston and Thom Linley have already participated in 19 online chats with school children. Anyone can vote and ask the scientists questions about their chosen species.

Here are Joanna’s top 3 questions that they’ve been asked:

1. How did the fish come to be named grenadier?

This question totally stumped us and I have been on an adventure finding the answer! I have been asking ichthyologists (fish scientists) all over the world and the answer I got was from the head of fishes in Te Papa Museum in New Zealand (told you I looked far and wide!).  The first grenadier described was the roundnose grenadier in 1765! That’s where we first get the name.  The grenadiers were a type of soldier that specialised in grenades in France in the 1700’s. They wore pointed hats based on the Mitre (a Bishop’s hat). The pointy hat looks like the high triangular first dorsal fin of the grenadier fish!

2. Why do they use their eyes less?

The deep sea is a very difficult environment to live in for a variety of reasons – not a lot of food, lots of predators, and the crushing weight of all the water above these animals. But one of the main problems with living in the deep sea is that below 200m of water there is very little natural sunlight getting that deep. The abyssal grenadier lives all the way down to 4000/5000m where there is no natural light so it is hard for them to see anything. (Although some other deep-sea animals produce their own light using bioluminescence!) Because it’s very dark the abyssal grenadier relies more heavily on its sense of smell to detect food.

3. What is your most unique feature and why has it happened (what genes cause it)?

We have lots of cool unique features!

We can survive under high water pressure. At the moment we know that we store a lot of an enzyme called TMAO which helps to keep our cells happy and stop them from being crushed by the pressure. We also live in the complete darkness, except bioluminescence which is light produced by some bacteria that live in some deep-sea species, but we can still see these flashes of light. We can go very long periods of time without eating so we have become very good at storing energy in our bodies. And we can also swim really slowly to help keep our energy stores high too.

At the moment we don’t know all the genes that help us live in such an extreme environment! That’s why we would love to have our genome sequenced so we can start to understand how animals can live in such a difficult environment. Because we are closely related to cod it would be really cool to compare our genome to the genome of a cod to see what lets us live deeper! This could be really valuable in understanding fish, like cod, as well as the abyssal grenadier.

If you would like to ask a scientist or place your vote for the next genome to be sequenced you can do so imascientist.org.uk. Voting closed on the 8th December.