After nearly one year editing the ICaMBlog, the time has come for me to tell you about my science and work since I joined ICaMB almost 18 months ago. 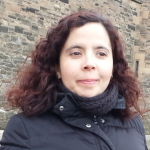 The fact that it has been 18 months since I moved up North to establish my own research group seems to have snuck up on me… Don’t get me wrong, so much has happened that, if anything, it’s surprising it all took place in 1 and a half years. At the same time, the feeling of a new adventure is still there.

Science is a constant adventure to seek new knowledge, to understand new mechanism, to see new things. In my case, to see into the very core of life’s machines: proteins. I use X-ray protein crystallography to probe the structure of proteins. It’s a bit like solving a puzzle: fitting the pieces of information together until we have a 3D view of the protein.

It is actually fitting that my blog post is the first ICaMB publishes in 2014 as this is the International Year of Crystallography. I could write a lot about it, but for now, I’ll leave you with an amazing video made by the Royal Institution that explains it all – in cartoons! If you want to know more about Crystallography, the Ri has a great collection of videos there, including Prof Stephen Curry’s Friday Evening Discourse, which I strongly recommend. 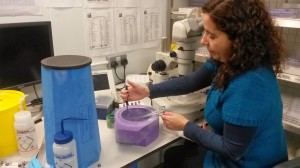 Freezing protein crystals for data collection at Diamond Light Source. H&S warning: liquid nitrogen is a hazard and we do handle it safely. At this point, I was just dipping the crystals into a small volume, all other procedures handling larger volumes involve wearing appropriate protection.

As a protein crystallographer, I’ve always been interested in proteins that have a relevance to human disease and used this technique to understand their structure and function. In the last few years, I’ve worked on proteins from human pathogens associated with hospital acquired infections, particularly Clostridium difficile and Candida albicans. However, protein structures don’t necessarily give us all the answers and they must be complemented with biochemical studies, as well as in vivo experiments. So my long term goal has become to establish a Structural Microbiology group, where we focus on structure determination of key proteins and complexes involved in pathogenicity as well as on their functional in vivo characterisation.

This is a challenge as it means stepping out of my structural biology comfort zone into the world of microbiology and cell biology. Not that I haven’t stepped out of my comfort zone before – if anything, those are areas that featured strongly during my undergraduate training as a Biochemistry student at the University of Porto in Portugal. In those days, choosing to do protein crystallography as my undergraduate project was the big step into the unknown. A trend that continued as a post-doc, when I joined Dr Cota and Prof Mathews group, a Nuclear Magnetic Resonance (NMR) lab at Imperial College, learning a completely different approach to protein structure determination. And just before coming to ICaMB, I worked in Prof Fairweather’s microbiology lab and always tried to learn a bit about the techniques others were using. So the current idea of bringing structural biology and microbiology expertise together in my lab is the natural evolution of these experiences.

Since joining ICaMB, I’ve focused on 2 main projects, both involving proteins from C. difficile. This spore forming strict anaerobe is resistant to most antibiotics and colonises the gut of individuals whose microbiome has been disturbed by these drugs. It is the most prevalent cause of gastrointestinal infections in hospitals and is a major cause of morbidity and mortality in the hospital environment. Despite recent decreases in the number of deaths and infections as hygiene procedures have improved in the UK, over 1600 people died in England and Wales in 2012 due to C. difficile infections (CDI). It also causes a huge burden to health systems, with an estimated €3,000 million per annum costs in the EU.

C. difficile disease symptoms are caused by the toxins it releases in a process that has been extensively studied over the years. However, the mechanisms of colonisation of the gut and spore formation are poorly understood. So we have been focusing on proteins involved in these two mechanisms. 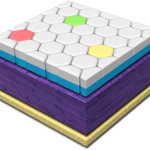 Firstly, I’ve been trying to determine the structure of SlpA, the main protein constituent in C. difficile S-layer. S-layer is a paracrystalline coat that covers the cell and is presumed to act like a defense mechanism, as well as being involved in gut colonisation. This work, initiated a few years ago in Prof Fairweather’s lab is now a joint collaboration between our two labs and Dr Fagan, at Sheffield University. 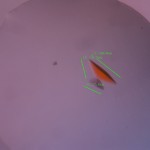 As this protein has tendency to form 2D paracrystalline layers, getting well ordered 3D crystals required for X-ray crystallography has been a challenge, but I have now succeeded in obtaining good crystals. However, other hurdles still need to be overcome to get a structure – but we are getting there! 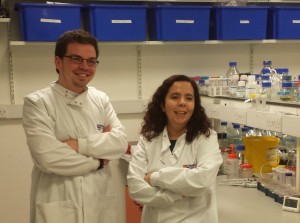 Last year, Adam Crawshaw joined my group as a BBSRC Doctoral Training Programme (DTP) student and we started a new project, looking at a complex between two membrane proteins that are essential for spore formation. As spores are the infectious agents, revealing the molecular details sporulation is important to understand the pathogenicity and infection cycle of C. difficile.

When spores are first formed, a small cell (forespore) is engulfed by the larger mother cell, physically isolating it from the environment and nutrients in the medium. So, for the forespore to fully mature, it needs a nurturing channel to the mother cell. The two proteins we are studying  – SpoIIQ from the forespore membrane and SpoIIIAH from the mother cell membrane – create this channel. We have already successfully produced recombinant versions of the proteins and shown their interaction in vitro. In collaboration with Prof Henriques at ITQB, Lisbon, we also established their localisation during C. difficile spore formation. Next: crystals! But we are also investigating potential enzymatic activity both in vitro and in vivo, to bring the structure and biology together.

It has been an exciting year and a half – a steep learning curve with many new tasks, from supervising students to managing a lab and teaching undergraduates and postgraduates. The adventure continues, with new challenges and exciting discoveries ahead.