By the IPA committee

On Thursday 30th January for the 4th Science Lives Seminar the ICaMB Postdoc Association (IPA) decided to delve into what it is really like to work in the Biotech industry, by hosting Dr Keith Foster from Syntaxin Ltd (Oxford, UK). For many of us Postdocs, the Biotech Industry is an unexplored entity…so how and why did Keith Foster make the transition from Postdoc to a Biotech company co-founder? And, what advice would he give Postdocs thinking of making the same leap?

Dr Foster’s talk started by illustrating his personal experience; he obtained a PhD in biological sciences in London then set his sights on a getting a post-doc position. He explained that he had first thought he would head to the bright lights of the USA for this but as his wife’s dentistry qualifications were not recognised over there, the couple moved to Nottingham to pursue their respective careers.  At this point Keith really wanted to pursue a long and successful academic career and said he couldn’t imagine leaving academia.

However, he soon realised that you can never have a career plan set-in-stone as within the first couple of years of his post-doc, Keith and his wife found out they were expecting their first child. He recalled this period as a wake-up call, like an alarm telling him he should get what he considered a “real job”, meaning he wanted a stable, and hopefully permanent job to support his growing family. He said he quickly realised that in a field as dynamic as science you not only have to evolve and make career moves for personal circumstances, but also, because the world of science is ever changing, we never know what to expect around the next corner!

So, from Nottingham, Keith made his big move to industry as a Senior Scientist, the company being SmithKline (before it became GSK). Much to his surprise in his new job, he found that he could still put to use his “passion for science” at the bench and really got a thrill from the drug development and translational aspects of the projects that were new to him. Early on Keith started working on the protein, Botulinum neurotoxin, which he says he  “fell in love” with and this protein remains his passion to this day with Keith recently having opened his own company based on it 20 years or so later, Syntaxin Ltd.

Like many of our PIs, being the big boss at Syntaxin Ltd means that Keith does not himself spend time at the bench, but he does insist that any Postdoc going into a company as a Senior Scientist would have to do lots of bench work, making what an academic postdoc and an industrial senior scientist do on a daily basis “very similar”. We should however expect a pay rise! Nice!

Keith Foster’s company was recently bought by a French company (IPSEN). This is where one of his biggest pieces of advice came from… always leave on good terms, and try not to make any enemies! It turns out that IPSEN actually made Keith redundant earlier on in his industrial career. However, Keith moved on, working at a handful of other companies on his way, but couldn’t believe it when he managed to shake hands with IPSEN over a multi-million dollar deal for his company all those years later! A real lesson in the importance of networking and maintaining those contacts!

Another point that Keith highlighted was that Biotech or the pharmaceutical industry may not be the holy grail that many PhD students or post-docs think it is…. he posed the question is there really more job stability there these days? In academia we have fixed two or three year contracts, but industry is also highly competitive and money is hard to come by, with some firms choosing to move away from the UK and making redundancies.

To wrap this seminar up, like all our Science Lives Seminar speakers, we asked him to mention how he managed to handle a personal life and successful research career in parallel. Being a father of 4, and now a grandfather of 5, he obviously didn’t spend all of his time working. He did say however “my wife laughed when she read this question”. They obviously would not have both given the same answer!

After the seminar there was the usual informal session for post-docs to ask questions over a glass of wine or a beer, and after the IPA committee enjoyed a friendly and filling meal with Keith at the Broad Chare.

The IPA is in the process of organising our next social event, updates will follow by email and on the website. Look out!  If you would like to become involved with the IPA and help organise future events, please get in touch!

IPA is run by Postdocs, for Postdocs. Get involved!

By the IPA committee

Thursday 23rd May saw the IPA’s second Science Lives Seminar. Following on from our first talk about the realities of establishing an independent research group in academia, the IPA wanted to explore what else a post-doc can do. What are our alternative careers?

To start answering this question, we invited Dr Andrew Jermy, a senior editor at Nature, to give us a talk on his career in journal editing.

Dr Jermy’s talk started by illustrating his personal experience. Like all of us, he completed a PhD in the biological sciences field and then did two short post-docs before he decided to leave academia to start a career in editing, first at Nature Cell Biology, followed by  Nature Reviews Microbiology and now more recently at Nature. To achieve this, he used his networking skills as he had met someone currently working for Nature at conference. Hint, keep building up your contacts! It was very interesting for us all to understand the motivations that brought him to try a new and alternative career. “Getting bored of waiting for westerns to come out of the developer”, he repeated several times.  Maybe he is not the only one?

Dr Jermy also described the several different job entry levels possible at Nature, something that applies generally to many of the larger scientific journals.  We now have a much better idea of what working for a scientific journal actually entails and where we could slot in. He pointed out that in this kind of career you need a keen interest in all science, as well as being constantly on top of the cutting edge research in your specific editing field. The ability assimilate information quickly and handle up to 40-50 papers per month, while travelling to conferences and universities is also a must. On the other hand, Dr Jermy underlined that his job is not a simple 9-5 job.  However, he can work from home and with the advantage of a permanent position as well as opportunities for career progression, this can make his career more family-friendly than what we post-docs are used to. Ultimately, this career seems ideal for those post-docs who no longer enjoy working at the bench, but still enjoy the other aspects of scientific life, such as reading, writing and networking at conferences. 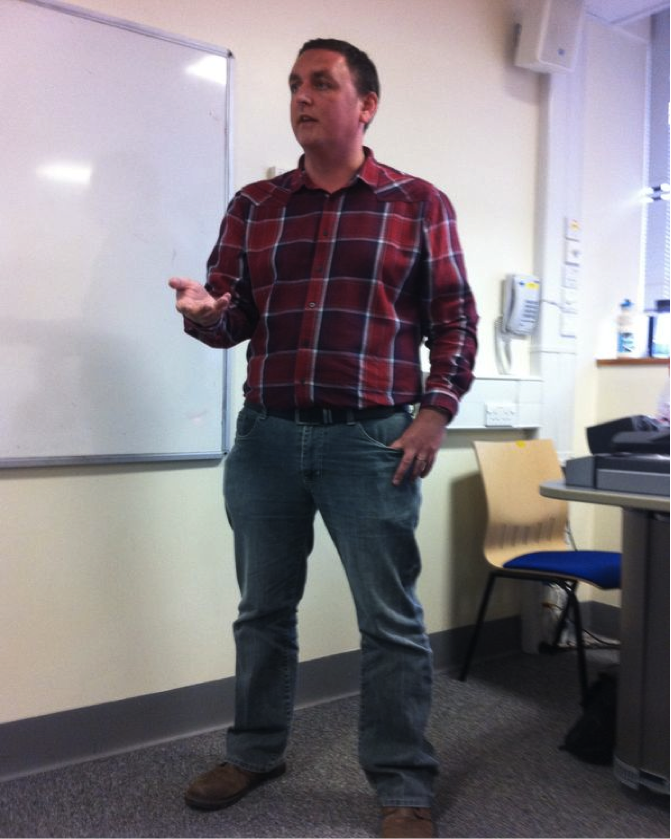 There was however much more to Dr Jermy’s talk than the career side… he gave practical tips to post-docs who want (or maybe its better to say wish) to submit a paper to Nature; from the title to the covering letter, from the abstract to the “style” of writing. Dr Jermy made a clear point that the philosophy of the journal is not to bin 90% of the papers they receive, but to focus on helping the top 10% of the articles emerge and get published. Finally, did you know you can send a pre-submission enquiry to Nature, asking if your scientific results are of interest before going through the long and painful online submission? Helpful for everyone!

After the seminar there was an informal chat-session, useful for post-docs to ask questions in a relaxed environment, helped of course by a beer in our hands!

The IPA wishes everyone a nice Summer and we will see you all for our next social event: a barbecue in September, a perfect occasion to give a warm welcome to new post-docs joining ICAMB as well as for all the current post-docs and final year PhD students to get together for the beginning of a new academic year.

IPA is run by Postdocs, for Postdocs. Get involved!