In 2013, we created the IRES fellowship scheme to recruit potential new Principal Investigators to ICaMB. Now Faculty wide and renamed the Newcastle University Research Fellowships (NURFs) a new round of recruitment has just opened. Here, Neil Perkins reflects on the thinking behind the IRES scheme and why recruitment of early career researchers is so crucial.

It’s a moment for sober reflection when you realise that you can no longer be classified as a ‘young scientist’ and have now become part of a problematic group of rapidly ageing professors. Although when Bob Lightowlers, the ICaMB Director, told us a few years ago that we only had one Principal Investigator (PI) under the age of 40 I think we were all a bit shocked.  Only one? Speaking as one of that cohort of over 40’s, I would of course defend our ability to still perform cutting edge science and stay on top of the latest developments in technology and social media. Well some of us anyway. However, as with many things, balance is important. Early career (to use the formal term) PIs bring vibrancy and energy to a department, generate new ideas and very importantly also challenge ingrained departmental behaviour. At least that’s how I like to fondly remember my time as a new PI in Dundee. I was probably just a pain in the neck.

To get back to the point, we had a problem and needed to find a way to fix it. In an act of skilful diplomacy, Bob Lightowlers managed to persuade the faculty leadership that we could begin the process of new recruitment immediately and that this would be funded by proleptic appointments. Yes, I had to go and look that up when I first heard it (after nodding my head as if I knew what he was talking about). In practical terms this meant that because we could anticipate retirements in future years, this future funding stream would be used to create new positions now. I assume the numbers add up.

We wanted to do something different with these new positions. In recent years, fellowships have become an increasingly popular mechanism to kick start someone’s career as a PI. They offer a transition period, where the new PI is protected from too onerous a teaching load (although all our new appointments will do some teaching), enabling them to focus on establishing an independent research programme. From the perspective of management, they provide the opportunity to assess whether a new appointee is really suited to this career before being offered a permanent position.  So at the beginning of 2013 we created the Independent Researcher Establishment Scheme (or IRES). In the first instance this involved the creation of three 5-year fellowships.  Importantly, after a rigorous assessment period, these should all lead to full academic positions with open contracts. It should be emphasised that there is no element of competition between our new IRES fellows (apart from some hopefully friendly rivalry).  We want them all to succeed and get permanent positions. 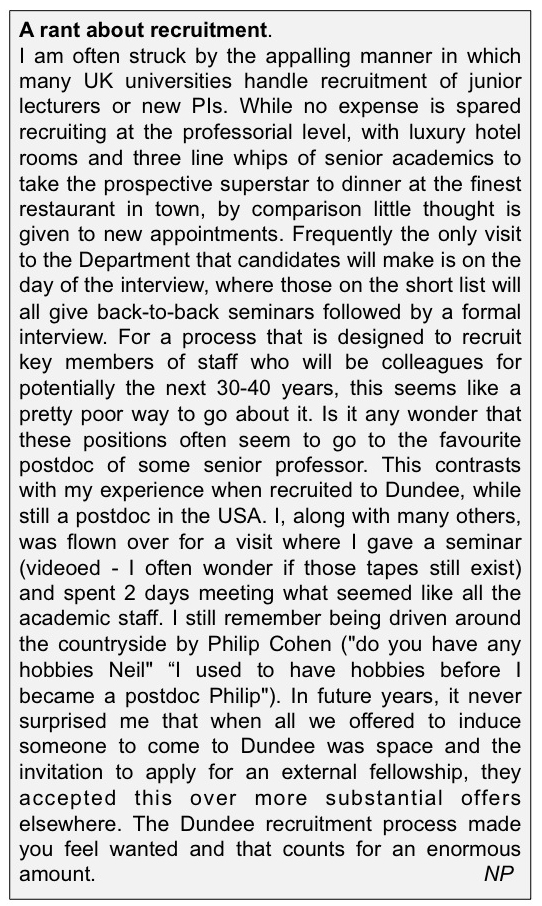 When it came to recruiting the IRES fellows we were very conscious of the fact that we were recruiting future colleagues so we wanted to do more than the fashion parade that often passes for the interview process for new lecturer appointments at some UK universities (see rant to the right). We had 80 applications for the 3 IRES positions, many of which were of a very high standard. From this, after some heated debate by the ICaMB Research Committee, we whittled this down to a list of ten, all of whom were invited to Newcastle for an informal visit, where they gave a seminar, met colleagues and participated in a ’round table’ discussion about their future research and funding plans. We took them out to dinner and put them up in a hotel. Not quite the full Philip Cohen Dundee bird watching experience but a step in the right direction I think. From this list of 10 we created a final short list of 6, who all returned for a formal interview and from these we appointed 3 IRES fellows. All our IRES fellows are now in place and you can read about who we appointed here, in a previous ICAMBlog post. Will it work? Only time will tell but the early signs are very promising. We are very proud that our first arrival, Owen Davies, was recently awarded a prestigious Royal Society/Wellcome Trust Henry Dale Fellowship (more on this in the future). Our IRES appointments also join our growing cohort of successful early career PIs that includes Paula Salgado (recently awarded an MRC New Investigator Research Grant), Kevin Waldron (also recipient of a Royal Society Henry Dale Fellowship), Yulia Yezenkova (Royal Society University Research Fellowship), Suzanne Madgwick (Wellcome Trust Career Re-entry Fellow), Heath Murray (Royal Society University Research Fellow), Joao Passos (BBSRC David Phillips Fellowship) and Claudia Schneider (Royal Society University Research Fellow). I was very happy to hear that they had recently arranged a trip to the pub to begin the process of plotting and scheming.

The author (3rd from left), in his youth, plotting and scheming with other new Dundee PIs in our traditional meeting place.

Imitation is the sincerest form of flattery, although not to be encouraged in undergraduate essays or academic publications, and now the ICaMB IRES scheme has been transformed into the Newcastle University Research Fellowships. Essentially, with some tweaking, our IRES fellowships have now been adopted by the entire Faculty of Medicine in Newcastle. Despite this, recruitment will still be handled by the Institutes themselves, so if you are reading this and are interested in becoming an ICaMB PI, then please get in touch. Here is our advert (ICaMBatNewcastle NURF advert final – pdf) and informal enquiries may be made to:

Importantly, ICaMB is committed to the Athena SWAN Charter for women in science as detailed on our web site.

The opinions in this article are those of the author and not necessarily those of ICaMB or the Faculty of Medical Sciences at Newcastle University. Although the author thinks they really should be.