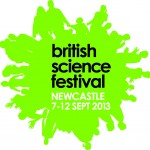 Last week saw Newcastle streets invaded by scientists, science-minded and science-curious crowds, all enjoying a very diverse, intense and exciting British Science Festival. This is a unique opportunity for different cities in the UK to showcase the best science they produce and Newcastle was no exception. Many ICaMB students and staff  took on the challenge, putting on a great show for all to enjoy. Some of their work even made it to an ITV Tyne news report (at 0:22):

If you missed the events, here’s a short recap. 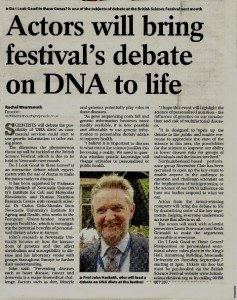 This debate on the perspectives of personalised nutritional advice based on genetic information, combined science and drama to explore the different aspects of the issues involved. It sparkled interest from participants as well as the media, bringing John’s research to a broader audience, as he explains. 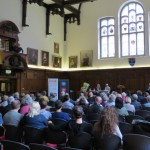 Packed audience at the debate

Together with Carlo Celis-Morales (IAH), I organised a debate around issues of using genetic information to personalise nutritional advise based on genetics.  We worked with a theatre group – November Club – to use drama to help highlight some of the issues to a general audience. Two external speakers gave a FOR and AGAINST view of using such personalised genetic advise and I chaired the event.

Protein structure is not the easiest concept to grasp for most audiences, so we used a very “hands-on” approach. Children and adults had a chance to grow their own protein crystals, play with 3D printed  protein models and “giant microbes” from which our proteins of interest come from and use the latest 3D screen technology to see “inside” our protein structures. This allowed us to explain how we solve the puzzle of proteins’ shapes and how it relates to their function, explained Paula.

“Epifection” – Dr Phil Aldridge and others 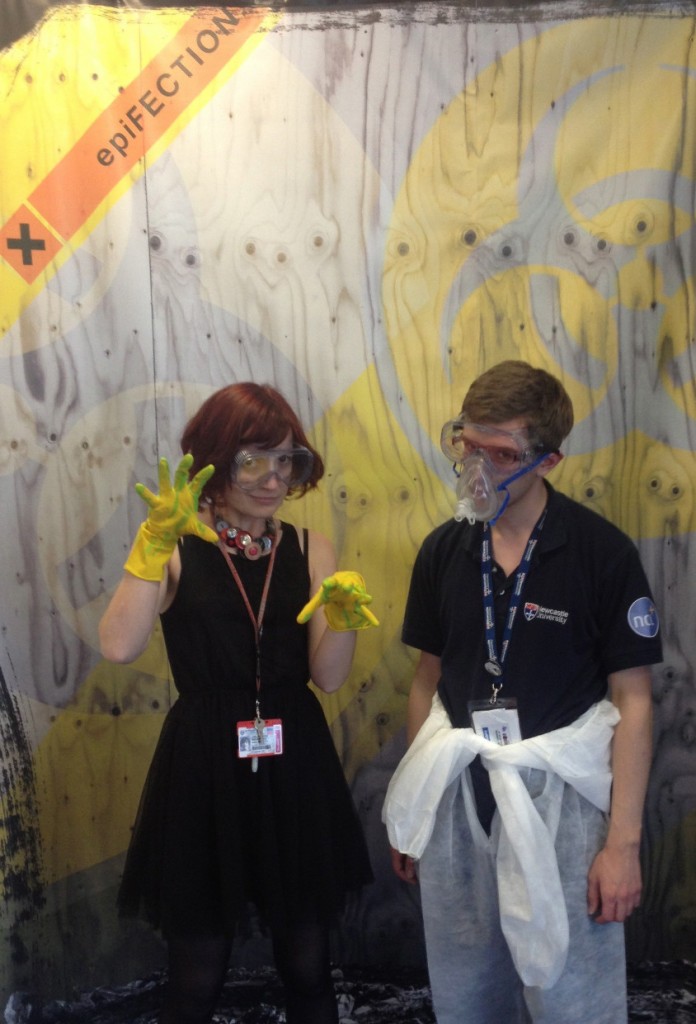 Epifection ran throughout the Festival and was accessed via smartphones, tablets and browsers of any origin. We had approximately 400 people register and interact with epifection. Our aim was to raise awareness of the decisions we need to make if a potentially life threatening outbreak were to occur. Epifection was not solely an online event but was designed to explore the benefits of using digital technology to compliment traditional engagement activities. Along with the simulation we ran a very successful public debate on the need for vaccine and treatment, the build the bug (lego) workshop and a survivors party.

Jeremy Lakey and Phil Aldridge together with helpers put on five “Build the Bug” sessions, which were associated with the Epifection simulated epidemic. Participants, which included families on Sunday, school kids on Tuesday and adults at the Epifection survivors party at the Tyneside Cinema, had to build a superbug out of LEGO. 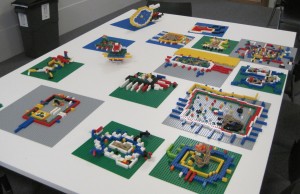 Participants were given a crash course in what a bacterium needs to survive (funnily enough, outer membrane proteins and flagella were emphasised) and then told to get on with it. They also had to pack in as much DNA (string) as possible. There were some amazing designs and insights, such as a boy who suggested that his bacteria had small molecules (toxins!) that they released to cause disease where the bacteria could not go and a girl who designed a “bluetooth bacterium”, which communicated with its friends and only caused the disease when there were enough of them around (Quorum sensing!). IRES candidates 2025? wonders Jeremy. 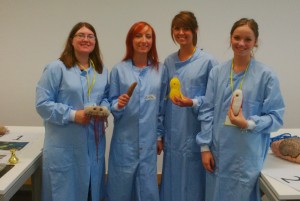 Organised by the School of Biomedical Sciences, this workshop was part of the Young People’s programme (pg. 7) and aimed at children aged 7-10.

According to Joy: Children learned what happens to the food we eat, what bacteria look like and how some bacteria keep us healthy but some can also make us ill. They were also able to see how well they were washing their hands using UV gel / lighting, and how to make an oral rehydration solution to rehydrate themselves should they get a tummy bug! I was really surprised how well behaved all the children were and how much they already knew about ‘bugs’. It was a great opportunity to build on my confidence around children (as I’ve always found them quite terrifying!) and to practice bringing science to the correct level to suit the public. As expected, the more interactive the activity, the more they enjoyed it – and I found the whole experience good fun and a nice change from being in the lab!

Tomas killing some Lactococci with an antibiotic

The workshop “Fascinated by food” aimed to explore different aspects of food including the role of microbes in producing and consuming food, expression of taste  experiences together with the importance of landscape and culture in influencing food production, explained Tom. 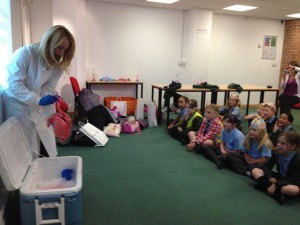 Sarah explaining the anatomy of the lungs

Inhalation station was a workshop set up to teach Key Stage 2 children about lungs and how we breathe. They tells us more about it.

The workshop started with a brief explanation of the anatomy and physiology of the lungs, using a real pair of pigs lungs! The children then applied this knowledge to three fun workstations i) Aircraft: where model lungs were created, ii) Air Force: where their lung volume was measured using a spirometer, and iii) Question-Air: a quiz of interesting and unusual facts about the lungs. The kids had fun gaining knowledge about the respiratory system and engaging in hands on learning activities. Inhalation Station was rated 5/5 by both the pupils and their teachers. 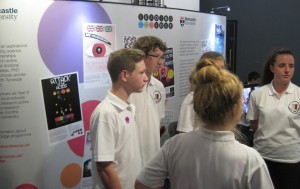 Leading edge is an aspirational scheme coordinated by Phil Aldridge, Sarah Lickess and Felicity Hunter. Twelve schools were involved in projects run by academics from across SAGE and FMS including from ICaMB Jeremy Brown, Jeremy Lakey and Phil.

For the festival, the Leading Edge schools were asked to describe their projects from their perspective in poster format. These posters were integrated into a professionally designed exhibit for the hands-on / drop-in zone of the young peoples program (pg. 14). Each day up to 500 school children past through this zone where we challenged them to a short quiz with questions such as “What organ of our body is like Dr Who?” Ans: Your liver as it can regenerate. A short documentary was also produced by the Leading Edge team that will be publicly available for viewing soon on their own blog.

Prof Jeremy Lakey and Prof Rick Lewis were invited by the Royal Photographic Society and the Science and Techonology Facility Council (STFC) to attend the opening of the International Images for Science Exhibition 2013, at the Hancock Museum. Rick tells us more: 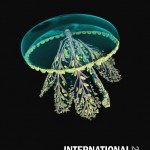 The exhibition contained about 100 images covering a vast range of subjects, from cosmic dust to bacteria, captured using a range of different imaging techniques.The image displayed is an X-ray image of a Blaschka glass jelly-fish. The Blaschkas were a father-and-son team of glass artists who devoted most of their careers to producing glass models of marine invertebrates. When they died, their technique died with them, and by imaging their works in different forms of light, it is hoped that their long-lost technical skills will be brought back to life once more. The exhibition is free, and is well worth a visit, as highlighted by the BBC. Open until September 30th.

“What’s Hiding in Your Mouth?” – Jill Robinson and others

Jill Robinson, a PhD student in Dr. Jakubovics‘ lab, was part of a group from the Centre for Oral Health Research (COHR) at the School of Dental Sciences that ran the “What’s Hiding In Your Mouth?” event as part of the Family Day on Sunday 8th September. She told us more:

The event was mainly aimed at educating children on the importance of oral health, the balance needed between microorganisms and the immune system, and how there are bugs in the mouth that are both good and bad. I was helping out with some microscopy, allowing children and adults to take samples of their own plaque and cheek cells, to look at under the phase contrast and confocal microscopes.

This week, ICaMB welcomed the Leading the Way winners into our labs for an exciting day of science. As you may remember from our previous post a couple of weeks ago, Leading the Way was ICaMB and Leading Edge’s collaborative pilot scheme to take some of ICaMB’s great science (and early career scientists) into a local school, George Stephenson High School in Killingworth. That week was a great success, inspiring all of its participants: students, teachers and ICaMB members alike.

The overall winners during the week in GSHS were the AU team, made up of Lucy Hainsworth, Libby Macpherson, Rebecca Brown, Lauren Rhodes, Abbey Wrightson, Kimberley Stoker, Sophie Anson, Connor Little, Nathan Clapperton. AU designed an outstanding poster to illustrate how the prion protein represents a biomarker of mad cow disease (or, more scientifically, variant Creutzfeld-Jakob disease, vCJD), how the structure of this protein changes from the ‘normal’ form to the ‘abnormal’, disease-causing form, and how knowing the structure of the prion protein can enable us to design a diagnostic test.

AU’s prize was to spend a day in an ICaMB laboratory, learning about how we determine the structure of a protein, with the members of the judging panel, Dave Bolam, Paula Salgado and myself.

After a brief welcome and introduction, we kitted our guests out in fetching lab coats, supplied them with ‘Leading the Way’ lab books and got started.

Showing the kids how to plate cells on a petri dish

First, the kids tried their hands at microbiology with the Waldron lab, streaking E. coli cells onto agar plates and then picking colonies to inoculate cultures for recombinant protein production.

Practising to become a PhD student, staring at a pouring column…

Next, Dave Bolam and his team demonstrated how a His-tagged protein can be purified using affinity chromatography, and then the kids loaded each of their protein samples on SDS-PAGE gels. Remarkably, all of the students successfully purified their target protein, though it’s worth noting that this was not actually the prion protein, PrPC (Imagine the risk assessment!).

“It was great fun spending time with enthusiastic kids and giving them a flavour of what we do. It reminds you why you do science in the first place“, says Dave after taking part in this type of activity for the first time.

“We’re doing science now, Miss!” – shouted one of the students

The day finished with a demonstration of protein crystallisation with Paula Salgado and Will Stanley of the Structural Biology Laboratory. The students attempted to crystallise lysozyme (with mixed success), and then observed protein crystals under the microscope.

“It’s always great to share our love for science with young minds and see them get really excited about carrying out the experiments we do routinely. It’s a breath of fresh air in the lab. Hopefully we’ve given them an experience to remember, as well as a better understanding of research in a biomedical institute.” commented Paula at the end of the day.

Although this was a high-paced tutorial in protein production and structure determination – a process that usually takes at least several weeks, and in some extreme cases an entire career – the students received a hands-on demonstration of some real-life research techniques. We all hope that this experience, even at such an early age, might just implant the idea of a future in science for some of these young people.

But from my own perspective, I can say that their enthusiasm has been infectious (no pun intended), and is a timely reminder of why I got into science in the first place – because at school I always found science classes more interesting than any others. I would have loved such an opportunity when I was that age.

Thanks go to Phil Aldridge, ICaMB’s Leading the Way coordinator, all of the members of the Waldron, Salgado and Bolam labs who helped out during the visit, the staff of George Stephenson High, and most of all to the members of the AU team, for making the day a success.