With exam season upon us, we thought we would help you guys out a little bit with a useful piece of procrastination – revision tips backed up with scientific research!

1. Get a good night’s sleep

We spend on average one third of our lives asleep so it must be important. There have been millions of studies looking into sleep and how it effects our minds and bodies.

Sleep is divided into five stages. The final stage is called REM (Rapid Eye Movement) sleep, named after the quick eye movements made during it. If you look at someone who is in this stage of sleep you will be able to see their eyes moving behind their eyelids (it’s not creepy if it’s for science). During this stage your brain is super active, brain scans during this phase look similar to someone who is awake but your body is paralysed. This stage is considered to be the point at which you consolidate memories into long-term memories.

Scientists in Italy looked at a range of studies focusing on the effects of sleep on the academic performance of students. The results showed students whose sleep was restricted did worse than usual in exams whereas those who were allowed extra sleep performed better. Further to this, a study by Trockel (2010) looked at lots of variables in 200 students and found those that woke up later performed worse in exams. So you might want to avoid the lie-ins during the exam period!

Although it can be tempting to stay up all night to get some last minute revision in when you’re particularly worried about an exam, I wouldn’t recommend it. Research from Pilcher and Huffcutt (1996) looked at 19 different studies and found sleep deprivation (going a long time without sleeping) can impair your thinking and this is not going to help you in any exam.

The world record for the longest time kept awake without drugs is 11 days and 24 minutes (please don’t attempt to break this record). The record was set by Randy Gardner is 1964 and the severe lack of sleep not only effected his concentration and memory but also led to paranoia and even hallucinations. Of course this is an extreme example but studies looking at just 24 hours without sleep have found worse performance on memory tasks and slower responses after sleep deprivation. Not ideal for an exam.

Coffee may seem harmless enough but it does contain a drug – caffeine. Although it does have its perks, as with any drug there are side effects that you won’t want around exam time. Firstly, I’ll explain the science behind what caffeine actually does once it’s inside your body. Within your body you have a molecule called adenosine which suppresses arousal and promotes sleep when it binds to its receptors. Caffeine is able to bind to adenosine receptors but does not trigger them, instead it simply sits there and blocks adenosine getting to the receptors so causes the reverse effects. This is clearly beneficial when you want to stay awake but can cause insomnia – not good as you now are well aware how important sleep is. Caffeine also stimulates the release of adrenaline – this already happens when you’re stressed so can worsen the effects and cause anxiety.

So what does the research say? Harrison and Horne (2010) conducted a study in which they deprived participants of sleep and subjected them to memory tests, some with coffee, and some without. They found those who drank coffee felt less sleepy but performed no better in their tests. Even in control conditions where participants weren’t sleep deprived, coffee made no significant improvement in their results.

If you are starting to lag with your revision and feel a little sleepy, try having a nap instead of reaching for the coffee. One study found that having a 60-90 minute nap can improve your memory recall and learning ability much better that a cup of coffee.

Good time management is key to making sure you cover all the topics you need to before an exam and still leave yourself enough time for a good snooze. It can help you keep calm as well if you know you have given yourself enough time. A study of 249 students found that time management behaviours such as planning, organising, setting goals and prioritising helped reduce stress levels better than leisure activities – although leisure activities also helped reduce stress, so make time for fun when creating your revision timetable.

But it’s not enough to just make your revision timetable – you obviously have to stick to it. Another study found that self-discipline is a major predictor of academic performance.

So make a plan, stick to it and get some sleep!

With exam season upon us, we thought we would help you guys out a little bit with a useful piece of procrastination – revision tips backed up with scientific research!

Most scientific models of how memory works agree that we have a short term and long term memory. Short term memory can hold 5-9 items whereas long term memory has a much greater capacity but not everything we see, hear or read ends up there. To help embed things in our long term memory it helps to rehearse them and practice retrieval too. This means that whilst re-reading the same notes over and over again will help rehearse them, it is also important to test yourself to see how much of it you can remember to be sure you can retrieve these memories when you need them.

Mnemonics are a technique used to help remember things by association. For example you might have learnt the order of the colours of the rainbow with the phrase “Richard Of York Gave Battle In Vain” with the first letter of each letter corresponding to the first letter of the colour it represents. So it translates to red, orange, yellow, green, blue, indigo, violet. Or maybe you learnt the compass points with “Never Eat Shredded Wheat”.

If you have to remember things in a certain order for your exam, making up a mnemonic like this can be a great way to help you. Mnemonics work by creating more meaningful associations and giving you cues to help you retrieve the information from your long term memory. Researchers Shetty and Srinivasan looked into the study skills of 137 Dental students and found that the use of mnemonics were associated with higher exam scores.

Here’s a mnemonic to help you remember the geological time periods: 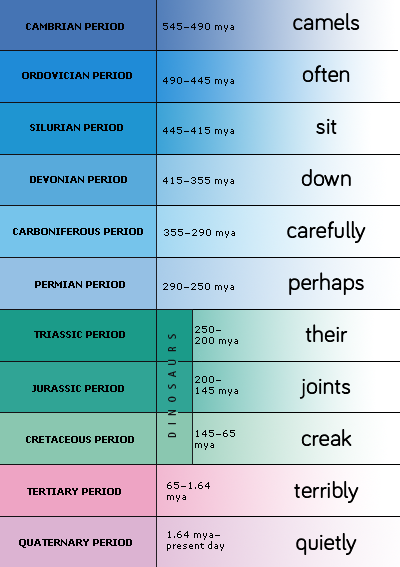 If you use mnemonics to aid your revision, comment and let us know what they are – you might be able to help someone else out too!

It’s a classic scene – just before you’re about to enter an exam, everyone is sat around stressing over their textbooks and flicking through sheets of scruffy notes trying to get in some very last minute revision. Is this really helpful? Studies have shown that you can generally hold, on average, 7 things in your short term memory and this fades after 30 seconds if not rehearsed and committed to long term memory. Therefore it’s unlikely you’ll remember much of what you read waiting outside the hall after you have taken your seat and read the question.

It’s much better to manage your time to allow yourself to cover everything you need properly and get it into your long term memory before the day of your exam!

Despite the fact I have just said you can only remember around 7 things in short term memory, you can probably remember a phone number or a couple of post codes for 30 seconds right? This is because, whether you notice it or not – that information is chunked, making it much easier to remember. This is why phone numbers are usually displayed with a gap after three or four numbers and why post codes are in two parts.

Chunking, or separating your revision into relevant sections can help you digest everything and remember it more easily. If you can create links between different bits of information and put them in meaningful categories it can help you to recall the relevant information in your exams. 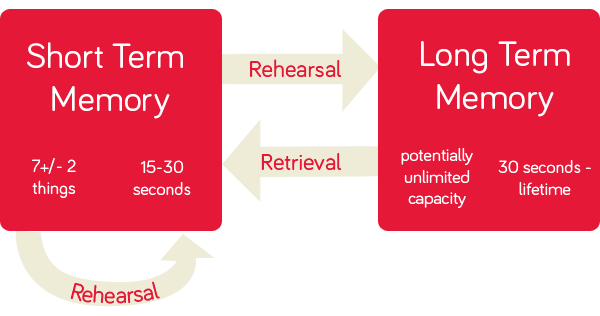 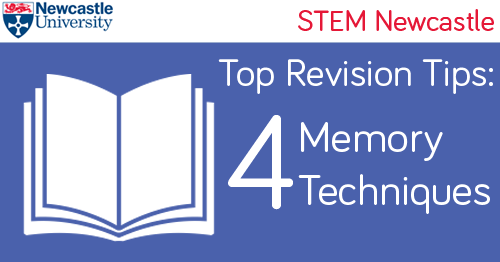