I’m writing this blog from an interesting perspective – though a member of the lab I’m not involved in the project, except through the (exhaustive!) discussions at coffee time with Harry Gilbert and the rest of the authors on the paper. This work, published today in Nature, describes the way in which one particular species of human gut bacteria is able to degrade a complex plant polysaccharide. Why is this new, you might well ask? Well, after being talked to death on the project, so much so I’d be glad never to hear a word about it again, I’ve actually come to appreciate what a great piece of work it is. The Bolam and Gilbert labs have published quite a bit on plant polysaccharide degradation over the years, but this one is a little different, because the polysaccharide involved – Rhamnogalacturonan-II (RGII) – is thought to be the most complex glycan found in nature. It contains ~13 different sugars linked by 21 different linkages, and all but one can be broken by a single bacterial species, Bacteroides thetaiotaomicron (Bt). 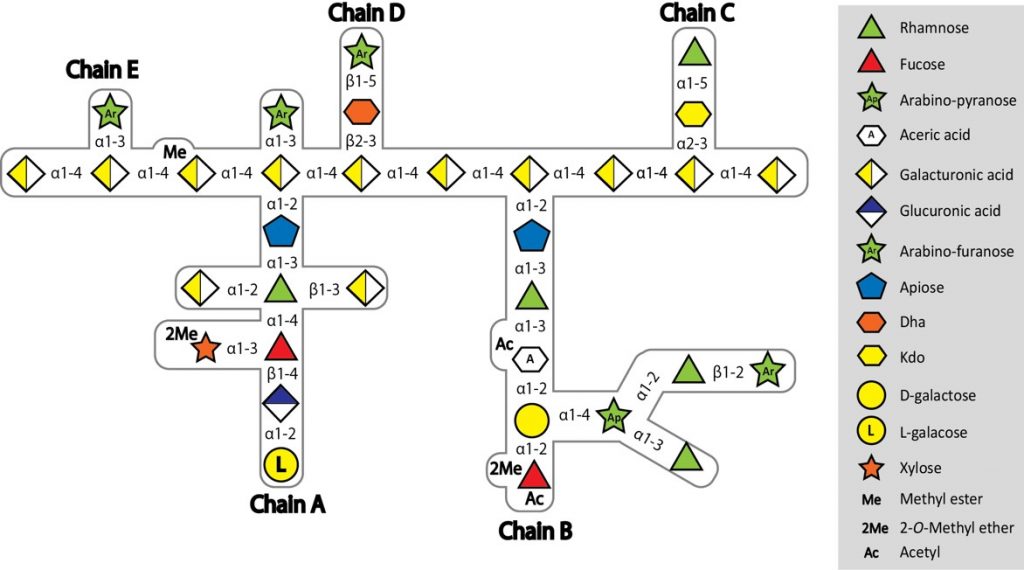 Wade Abbott, a post-doc in Harry’s lab when he was at the Complex Carbohydrate Research Centre, in Athens, Georgia, which is incidentally where the structure of RG-II was determined in the first place by Alan Darvil and Malcolm O’Neill in the 1980s, initiated this project. We knew which loci were upregulated during growth on RG-II from earlier work by myself, Dave Bolam and Eric Martens, so Wade set about cloning and expressing the 30 genes in these loci, and looking for activity with a PhD student, Jeff Xhang. It was a tough job, and little progress was made. When Harry came back to the UK he decided he absolutely had to crack it, and put two post-docs onto the project, Art Rogowski and Didier Ndeh. Though as the project has progressed, more and more people from the lab were sucked in, including the post-docs Alan Cartmell and Aurore Labourel, and Harry’s last PhD student, Ana Sofia Luis. All worked incredibly hard, assisted by Arnaud Baslé from SBL, and between them discovered the activities of 26 enzymes, including seven entirely new glycoside hydrolase families, three new activities, and seven crystal structures, with all the active site mutations, and ligand soaks that go along with a new crystal structure.

Working out the enzyme activities on a polysaccharide as complex as RG-II poses some problems, in that you can’t really buy it, so you have to make it. RGII is concentrated in red wine, so Harry put 150 litres of Asda’s not so finest wine on Dave Bolam’s credit card (don’t ask) and with Art and Didier, took it to Prozomix in Haltwhistle, to use their industrial concentrators. 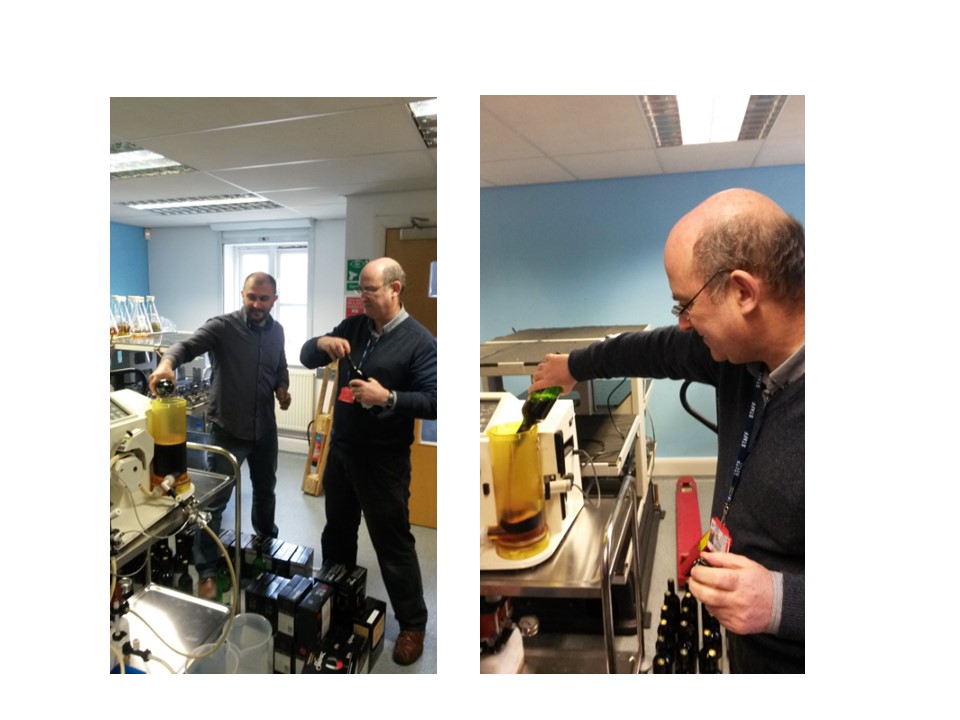 Starting to concentrate 150 L of wine

As you can see, this did not end well. 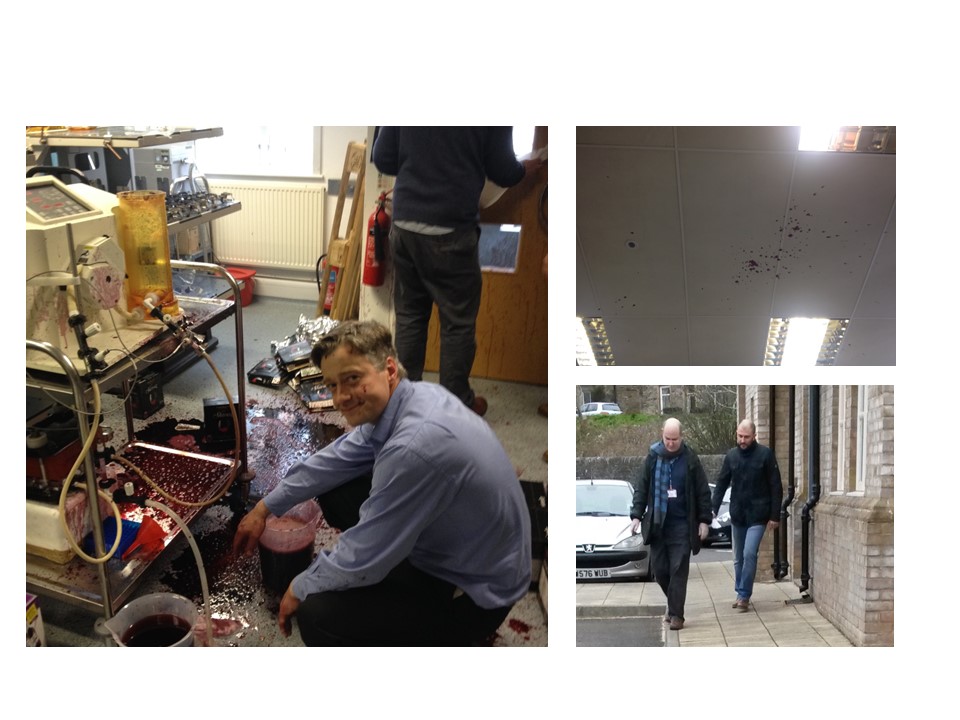 Art then turned to apple concentrate and managed to purify some through an intensive multiple two-week process. Making or buying oligosaccharides is also extremely difficult, so Didier devised a way of killing two birds with one stone – identifying which unknown open reading frames (ORFs) were enzymes, and making oligos at the same time. By deleting the gene of interest, RG-II degradation (which is mainly exo-acting) was halted at the point at which that enzyme acted. Taking the supernatant from these strains grown on RG-II and purifying the sugars released by the bacterium yielded partial breakdown products which could be identified by mass spectrometry with tremendous help from Joe Gray, and then used as a substrate for the enzyme in question.

Getting the data in a format suitable for the tight space restrictions imposed by Nature was almost as challenging as doing the work. Given that Harry is not very artistic, and certainly has no idea how to use Adobe Illustrator, he was fortunate to have three talented artists Ana, Art and Aurore, who ended up doing all the figures. They are now referred to as the art department. This project was definitely a labour of love (for Harry, if no-one else!) and by carefully characterising the breakdown of this polysaccharide, one linkage at a time, has actually revealed new features of the structure of this critical plant polysaccharide. Finding and characterising the vast repertoire of enzymes produced by gut microbes is not only interesting in its own right, but can provide tools to understand complex glycan structure. It’s a fantastic achievement, and I pity the poor lab member who has to try and bake the RG-II cake for the celebrations this week!