Kate Clark is a PhD student in ICaMB who recently won first prize as part of the Thermolastics team at ACTION 2013.  Here she tells us what it was all about and how she found the experience

I’m a PhD student in David Lydall’s lab, and I was part of the ThermoLastics team that recently won ACTION 2013.

ACTION is an annual, EPSRC-funded, 6 month programme open to both postgraduate students and research staff (http://research.ncl.ac.uk/action2013/).  The aim of ACTION is to generate ideas from the Newcastle University research community to tackle societal challenges in the North East. This year, there were three societal challenge themes: sustainability, social renewal and changing age.  Participants were asked to create a social enterprise that addressed one or more of the challenge themes.  The programme started with a two-day residential, where teams were formed and business ideas were generated.  This was followed by a series of 1-day training labs, which introduced teams to key aspects of developing a business.

I formed a team with three engineering PhD students – Thomas Bohl, Eesha Raut and Amy Green.  Eesha and Amy are chemical engineers, partly working for companies during their PhDs, and Thomas works on developing sustainable fuels.  My research background is yeast genetics, which is quite different to that of my team members!  However, one of the best aspects about ACTION is that inter-disciplinary collaboration is encouraged and we soon found that we had a number of similar business ideas.

The initial two-day residential meeting for ACTION2013 was held during a cold snap in March, so we started looking at a socio-economic measure called fuel poverty, which is where households spend 10% or more of their income on heating their homes adequately. We did a little more research and found that nearly 25% of households in the North East are in fuel poverty – the second highest rate in England.  We decided to build a social enterprise around reducing fuel poverty, and believed that the best way to do this would be to offer cheap home insulation that was suitable for any home.  The North East has very old housing stock, most of which does not have cavity walls, so we wanted to develop internal insulation for solid walls.  Also, we wanted our product to be sustainable so we experimented with using finely shredded household plastic as the insulation material – currently only around 50% of household plastic waste is recycled.  At this point we decided on our name, ThermoLastics – Thermo for warmth, and Lastics for making plastics last for longer!

Our first prototype product was a plasterboard panel filled with finely shredded plastic from household plastic waste.  The panel is fitted to the internal wall of the home.  Our second prototype used a 3D-printed plastic matrix that can be filled with shredded plastic insulation.  Currently, we are investigating ways to maximize the insulation potential of plastic waste, such as using finely milled plastic to form fibres.  To find out more, visit http://www.thermolastics.co.uk/

Overall, we hoped that our business would address all three of the societal challenges: sustainability (through using recycled plastic), social renewal (by reducing expenditure on fuel bills, which might help families to lead more active, social lives) and changing age (because 50% of those in fuel poverty are over 60). 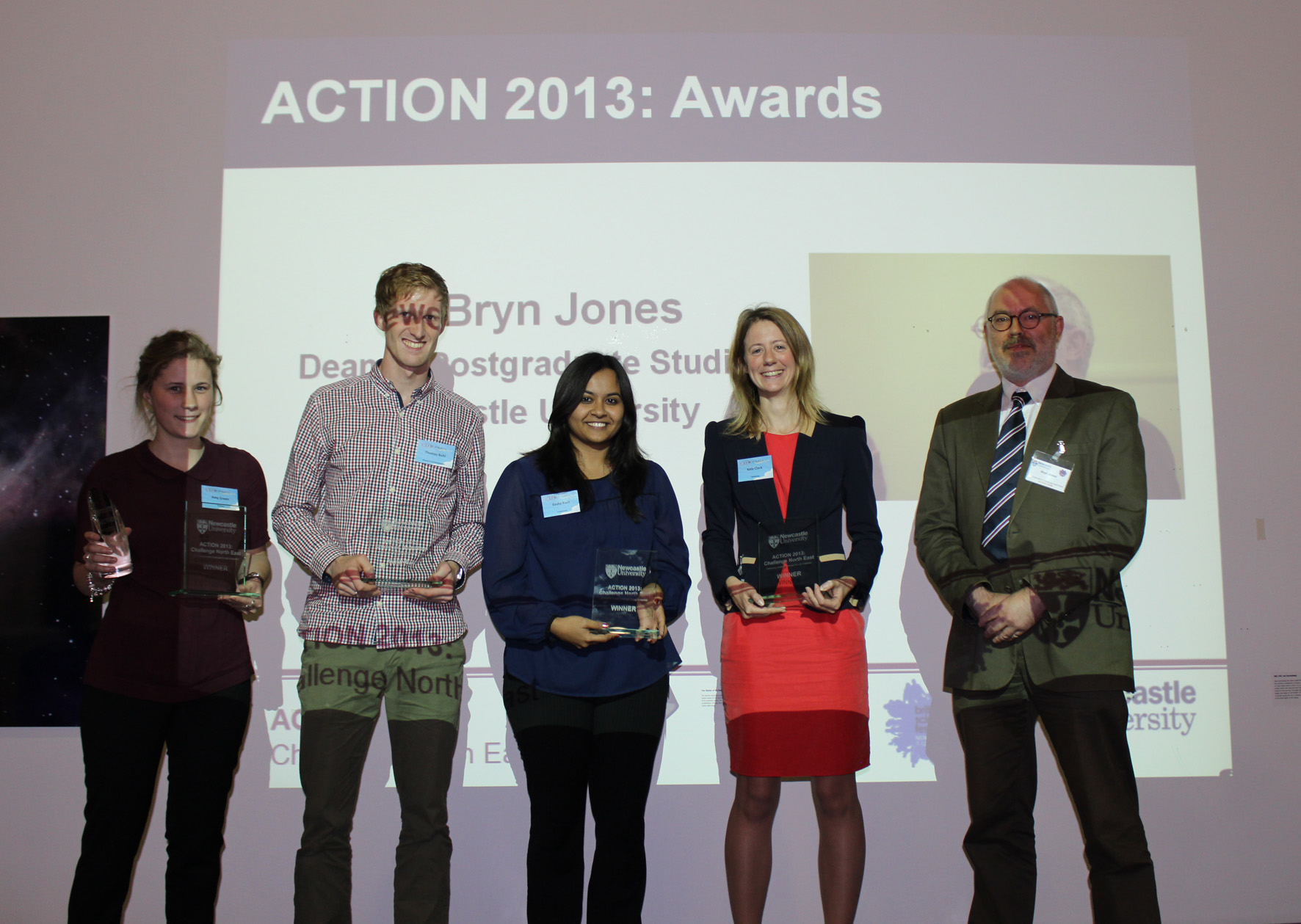 ACTION 2013 culminated in a one-day showcase event at the Great North Museum, which was part of the British Science Festival 2013.  Teams first pitched their ideas to a panel of judges, who were business experts from the North East.  Then, teams opened their trade stands, displaying their business ideas, to judges and the public. We were delighted to be declared the ACTION 2013 winners, as decided by the expert judges, and were thrilled to be awarded the People’s Choice Award too – decided by votes from members of the public.  The prize awarded by the judges is £2,000 per team member to put towards developing the business further, or developing ourselves as entrepreneurs.

Prior to ACTION 2013, I had no business experience but by the end of the programme, I had helped design and develop a product, produce a business plan, pitch the business and run a trade stand – so I have learned a great deal.  The ThermoLastics team has decided to stay together and explore ways in which we can fund research and development for our product.  Perhaps we will even bring it to market in the future – watch this space!