Last week saw ICaMB host the latest in our series of Baddiley lectures, which commemorates Professor Sir James Baddiley (1918-2008). Baddiley was a distinguished Professor at Newcastle University (1954-81) and a Fellow of the Royal Society (elected 1961) who made numerous important fundamental discoveries in microbiology, not least the discovery of teichoic acids, cell wall components in Gram positive bacteria. 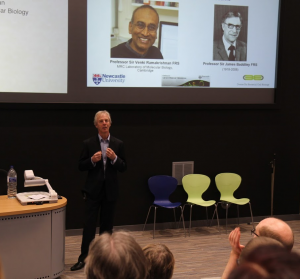 Baddiley’s work on the fundamental processes of bacteria, including the structure and function of components of the bacterial cell wall, is continued to this day in Newcastle through the work of members of ICaMB’s Centre for Bacterial Cell Biology (CBCB). Although James Baddiley died shortly after the first in ICaMB’s series of Baddiley lectures, we were delighted that the Baddiley family was again represented at this year’s lecture by James’s son, Christopher Baddiley.

This year’s guest speaker was Professor Sir Venki Ramakrishnan, distinguished research leader and Deputy Director of the Laboratory of Molecular Biology in Cambridge, Nobel laureate and newly-elected President of the Royal Society. With all of the demands on his time that come with this new role as President, the large audience that gathered on Friday afternoon were grateful that Venki was able to find time to visit Newcastle to deliver his lecture. As ever, both the lecture and the surrounding celebration was expertly organised and introduced by CBCB Director, Professor Jeff Errington. 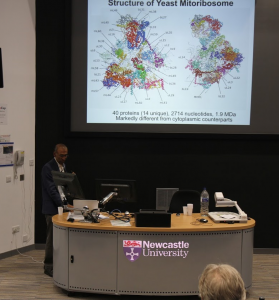 Venki illustrates the structure of the yeast mitochondrial ribosome

Venki’s lecture gave a brief history of his atomic-resolution structural studies of the ribosome, the macromolecular nucleoprotein complex that converts the four-letter genetic code in nucleic acid into the twenty-letter amino acid code in proteins. He presented detailed structural models of eukaryotic ribosomes, derived from X-ray crystallography and cryo-electron microscopy data accumulated over 30 years of detailed study in his laboratory.

We asked some of ICaMB’s early career researchers to describe their impression of Venki’s lecture:

“Professor Venki Ramakrishnan was kind enough to deliver this year’s Baddiley lecture. It was an honour to meet Venki, who somehow managed to fit us in between Royal Society committee meetings and a chat with the Science minister! He impressed us all with a phenomenal talk discussing how he solved the structure of the mitochondrial ribosome using cryo electron microscopy. Wow – cryo EM has truly moved beyond blob-ology! One thing that really struck me about Venki is how humble he is; despite being so incredibly successful and lauded, there’s not a trace of ego on the guy; something for us all to aspire to.” 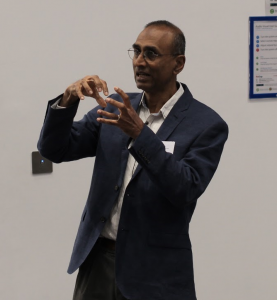 Venki illustrates how the ribosome works

“It was incredibly cool to hear about Venki’s work first hand. The enormity of his achievement became clear when he showed a single slide with the dozens of conformations of the ribosome’s catalytic cycle and indicated that there were structures available for the majority of them! And what was humbling was that Venki did not seem at all interested in dwelling upon his past successes. Rather, he briskly moved past this slide onto his current work regarding mitochondrial ribosomes which was both cutting-edge but also somewhat raw because of its novelty. I found it inspiring to see a scientist of his stature still so driven to continue discovering and learning.” 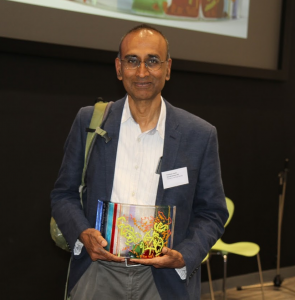 Post lecture, Venki holds the gift he received from his hosts at ICaMB

“For me Venki’s journey was an excellent advert for never giving up. Often as researchers (particularly at the start of our careers) we are encouraged to know when to call time on a set of experiments that are bogged down and not yielding answers. Pursuit of the next grant and the speed of some of our competitors unfortunately make it risky to continue to spend years and years believing in the same project that fails to show progress relatively quickly. Yet what an example Venki is, many years and many postdocs focusing on the same problem, persistence and belief in himself and his team has more than paid off. Inspirational.”