As the Newcastle Structural Biology lab, prepares to enter a new era with a fantastic state-of-the-art new in house X-ray system, we asked Rick to give everyone a perspective of the last 14 years of Protein Crystallography in Newcastle on behalf of all of us – Arnaud, Martin, Jane, Paula, Bert, Owen and Jon.

A little over 20 years after von Laue, Friedrich and Knipping collected the first X-ray diffraction experiments on copper sulphate in 1912, Bernal and Hodgkin conducted the first macromolecular crystallography experiments – on pepsin, which was first crystallised by Northrop in 1928. These, and other early pioneers (including father-and-son Nobel laureates WH and WL Bragg), established the principles by which Kendrew and Perutz solved the first 3-D protein structures, myoglobin and haemoglobin, in 1958 and 1959.

If we fast-forward more than 40 years to the RAE2001, and a stated ambition for the immediate predecessor of ICaMB was to establish a protein crystallography group in Newcastle – I think it fair to say the the University was a little slow to recognise the value of structural biology! 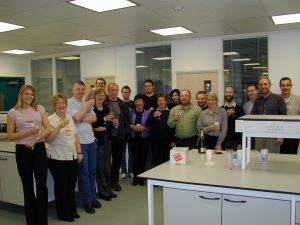 Nonetheless, the Director at the time, Monica Hughes, notably aided and abetted by Steve Yeaman, Jeremy Lakey, Bernard Connolly and Harry Gilbert, coerced the powers-that-be to dig behind the sofa for some loose change and, to cut a long story short, the Newcastle Structural Biology lab (NSBL) was born in 2003. 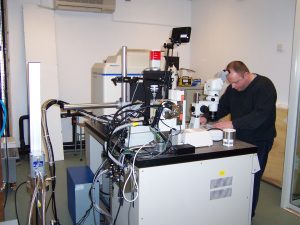 Back then, there were just two prime users of the X-ray diffractometer, my group and that of Mark Banfield (who left for the John Innes in 2008). Mark’s departure opened up an opportunity for Susan Firbank to establish her own research group, which in turn meant that Arnaud Baslé replaced Susan as the X-ray facility manager. In between Susan’s sudden departure in 2011 for a new life as a pharmacist, our colleagues in NICR, Martin Noble and Jane Endicott  were recruited to NICR. Paula Salgado arrived in 2012, Bert van den Berg and Owen Davies in 2013, and Jon Marles-Wright, whose beatific face used to light up the hoardings around the INTO building site, reappeared (after a sojourn up in Edinburgh) in Biology in 2016. In 6 years, the NSBL grew from a single PI to seven, plus Arnaud. The active user group now comprises well over 30 names.

In 2015, the University announced it had set up the Research Infrastructure Fund (RIF), a £31M pot of gold to which like-minded groups could apply for funds for new equipment and other essential infrastructure. To be honest, the RIF had passed under all our radars, and we were first alerted to it by a small molecule crystallographer in Chemistry. We put together what we thought was a strong case and were very pleased to hear just before Christmas 2015 that our bid was successful. Ironically, our colleague in Chemistry’s application to the same round was, ahem, unsuccessful, but a big hand to Mike for the heads-up! 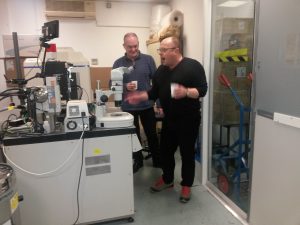 So a year later, after a period of testing and comparing different options and going through a remarkably painless procurement procedure, we serenaded the final shut-down of the 13-year old X-ray equipment over a glass of prosecco. Bert and Martyna both won prizes for guessing closest how many operational hours (>95,000) the old generator had clocked up. The floor in the X-ray lab was relaid (humble apologies for the noise and the smell…) and we have just installed our brand new box-of-tricks.

So what do you get these days for a little under a million pounds? Not only a state-of-the-art X-ray detector, but a revolutionary new X-ray source. Instead of firing electrons at a rotating copper drum to generate X-rays, the new X-ray source relies upon the application of an electric current across a jet of liquid gallium, to produce an X-ray beam with the best spectral characteristics and intensity in the market place. Allegedly. 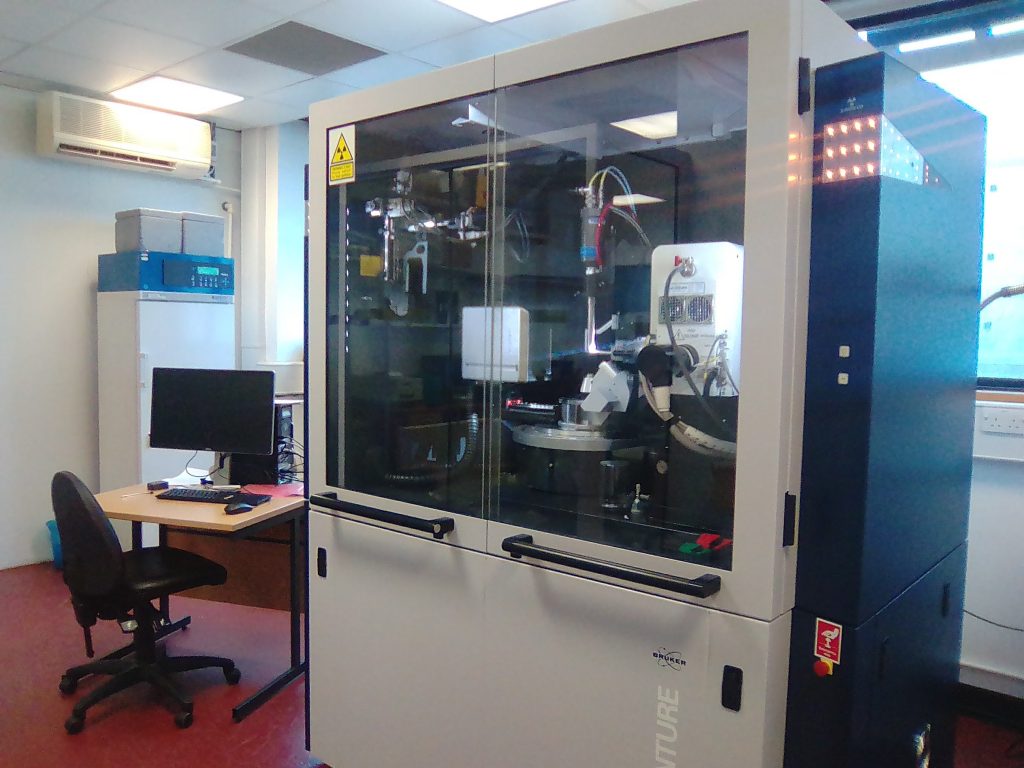 Moreover, we have been early adopters of this brand new technology – in fact we are the first and currently only UK group with such an instrument! Exciting times indeed.

The upshot is a 100-fold improvement in performance. Data sets that would take an entire weekend to collect can now be done in 20 minutes, about what it would have taken to collect just a single image with the old system. The final piece of the jigsaw is expected in the late spring, when a sample changer will be installed. This robotic slave will allow us to load up 48 samples into a dewar of liquid nitrogen for the programmed sample changer to load one at a time onto the X-ray machine, take test exposures, rank sample quality, and then go back and collect full data sets on the best crystals. All of this without any user intervention. Amazing. If you’d told me back in 2003 that we would have this capability in-house before both Bernard and Harry had retired, I’d have laughed out loud….